My Team Is Better Than Yours: Toronto Raptors Edition

Share All sharing options for: My Team Is Better Than Yours: Toronto Raptors Edition 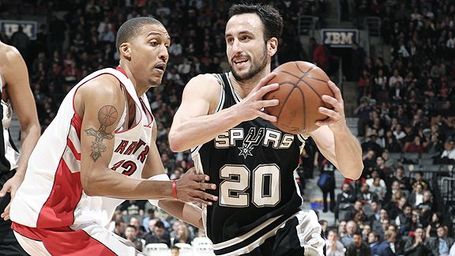 No funny caption. I just really love the look on Manu's face in this pic. It makes me happy.

Finally, we are out of the bottom of the West and on to the mediocrity of last year's Eastern conference. Ten teams in the league finished with winning percentages between 39.0 and 52.4. All ten were Eastern conference teams. That is pretty crazy to me. The West had 6 teams lower than 36% and 5 lower than 30%. The Eastern conference only had 1, the Wizards, and I think they will be much improved next year. The East is a place where every team thinks they can make the playoffs. The West is a just a shakedown of how good the good teams are and how bad the "developing" teams are. The Knicks were the team at 39%, but I'm skipping them for now. That means we've broken into teams with greater than 40% win records. That is the Raptors.

I didn't have any music about raptors, dinosaurs, Canada, or Toronto. I could have gone with some classic Our Lady Peace, but JRW emailed me some music picks for this one. Enjoy.

I just scrolled through all the stats looking for some gem of a comparison. There is a general trend that the Raptors follow a lot of the patterns the Spurs follow. The major exception is defense though. The Raptors give up a better shooting percentage than they make themselves. They have more assists than us but are still in a negative margin to their opponents. One thing I really like about the stats is that the Raptors got to the line fairly well and were the top free throw shooting team in the league. That is very un-Spurs-like. 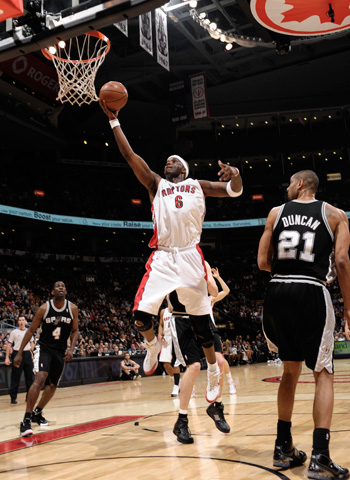 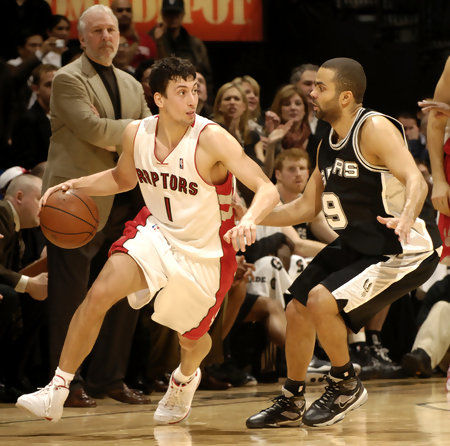 Informal Study in Facial Expressions
Parker: Where did this guy come from? I thought I'd have a night off after having to play Devin Harris last night.

Ukic: It's great not to be on the scouting report.
Pop: ERROR....(Well the I can't crack that code but maybe something like "I remember that time I killed like 50 communist Nazis in Croatia. Shit, I hope I'm not this kid's dad."

They drafted Demar DeRozan. I have no clue who that is but he has twice the "De" DeJuan Blair has. He went to USC so he is probably a really great athlete and a good player. He is 20 years old, 6'7" and 207 lbs. That sounds pretty solid for a number 9 pick. He is a 2-3. Draft Express confirms all of my USC stereotypes listing things like "lateral quickness, athleticism, size for position, and solid frame" as strengths and "lacks offensive polish, defensive fundamentals, not ready to contribute immediately, and average basketball IQ" as weaknesses. ATS microscoped him. I recommend it if you are interested in him.

So conveniently, a trade went down last week to get rid of the thorn in our side, Roko Ukic. The Bucks traded for him so I think this was a secret part of the RJ trade. We'll know for sure if he gets sent to Europe. They also traded Carlos Delfino and got Amir Johnson and Sonny Weems in return. Both are pretty much unproven players. Amir Johnson has been somewhat functional in a backup role in Detroit. 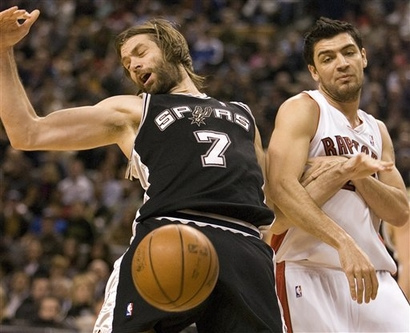 They've lost Jason Kapono, Shawn Marion, Kris Humphries, Nathan Jawai, Roko Ukic, Anthony Parker, Pops Mensah Bonsu, and Carlos Delfino. They are better off without Marion. Kapono was a great shooter, but his stock is pretty high right now so it was probably a smart move to let him go.

They've added Hedo Turkoglu. This is the huge move. Not just because they got him, but because they snaked him (or he snaked himself) out of Portland which is great for the Spurs. The Raptors also added Marco Belinelli, Antoine Wright, Reggie Evans, and Jarret Jack in addition to Weems and Johnson.

It is worth mentioning that we played them twice last year when they had Jermaine O'Neal and Jamario Moon and never played them after he was traded for Marion.

I couldn't find it listed anywhere, but they got Rasho, too.

PG: Tony Parker versus Jose Calderon: Advantage Spurs: One of them is a a better distributor and the other is a better player. Both players are great point guards.

SG: Roger Mason versus Marco Belinelli: Advantage None: Mason is marginally better in just about every stat, but if Belinelli really starts I think he will see a jump in minutes. Mason played almost 10 more per game last year.

SF: Richard Jefferson versus Hedo Turkoglu: Advantage Raptors: Hedo is better and is coming off a career year. I think he will continue playing good basketball and really improve this team.

C: Tim Duncan versus Andrea Bargnani: Advantage Spurs: Bargnani is a terrible rebounder for his size. He can shoot the 3 though. I think he is compared to Dirk and that seems fair looking at the stats. Poor man's Dirk. It seems like he would be awesome as a backup to Bosh at PF and then get a true center. Maybe they should start Rasho even though he is a downgrade overall.

Point Guard: Hill vs Jarrett Jack and Marcus Banks: Raptors win this one. Jack is proven while Hill isn't.

Wings: Manu, Finley, Hairston, and Williams vs DeMar DeRozan, Sonny Weems, Quincy Douby, and Antoine Wright: Antoine Wright started for Dallas last year and is decent. Weems and Douby have not done much in the limited minutes they have been allotted so far in their careers. DeRozan is an unproven rookie. Manu and Finley are much better.

Front Court: Blair, Mahinmi, Bonner, Haislip, and Ratliff vs Amir Johnson, Rasho Nesterovic, Reggie Evans, and Patrick O'Bryant: We dominate them here. They are pretty shallow in the front court. Hedo is going to need to get like 6 rebounds a game at least. Rasho is the only one I see getting any sort of major rotation. Reggie Evans can get maybe 10-15 a game.

Result: I really like the moves they've made. Their starting unit will really compete and probably dominate some teams. If some young guys step up then they can have a pretty solid team, but I just don't see it. I like the Raptors and a lot of their players so I'll be rooting for them to make the playoffs, but I'm not sure they have really separated themselves from the pack despite improving. Rebounding could be the death of their team.

Mon, Nov 9 vs Toronto: We have a back to back then 2 days rest before this game. It is the the third home game of the season and the first home game of a 12 home - 3 road game stretch. We really need to prove our mettle in this stretch of the schedule in order to earn Manu and Duncan rest in the later months

Sun, Jan 3 @ Toronto: SEGABABA with an at Wizards the night before. After this game we get 2 days of rest and then a 4 game home stretch. I think this will allow us to go all out in these games if needed.

So that is my Spurs-Raptors preview for next season. Next up are the Milwaukee Bucks, a team that always defies their roster and plays us incredibly well. Plus, they now have Roko Ukic.....

For more information on the Toronto Raptors, check out Raptors HQ.