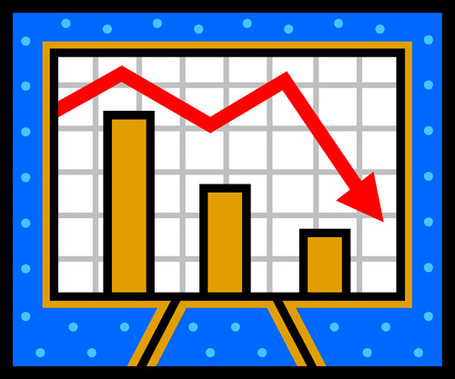 I have the anti-Midas touch

Two games into my let's-care-about-the-WNBA phase (phase?) and we're already nearly out of the playoffs. Both games have been losses, and close ones to that. For a guy trying to learn how to love the sport, losing in this fashion probably doesn't help. Even if I didn't get to watch the second game.

I apologize for the lack of a game thread for the game against Los Angeles. I'm sure all two of you who were planning on watching it were crushed. Today we play against the Detroit Shock, last season's champions, and this one's a must-win if we want to make the playoffs. So come cheer... because otherwise I'll feel lonely.

Hack recaps and a short preview, after the jump. 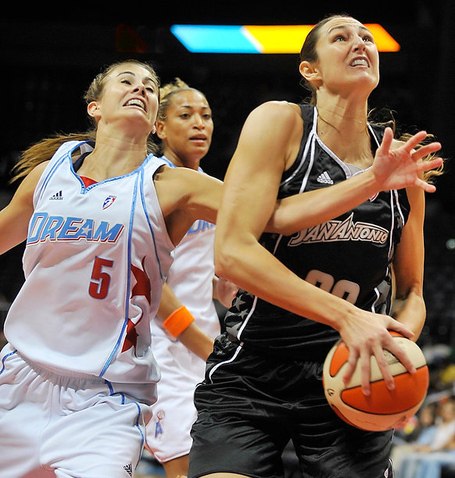 Cover your heart
(All photos taken from SPMSportspage.com) 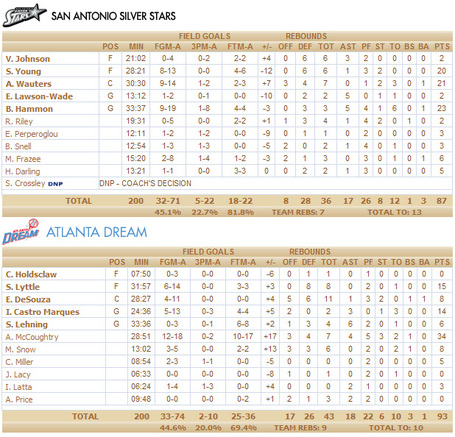 Despite being unable to watch it live because of technical difficulties (more on this later) I sat down yesterday and took the time to watch it properly.

We did everything we could to lose this game, and we succeeded. We started awfully cold in the first quarter, missing from all over the court. Riley, who would go on to disappear for the rest of the game, kept us in the game in that initial quarter with a timely triple and two FTs, but all in all in all it was an ugly game for the first 10 minutes. At one point the Stars were shooting 31% from the field, but thankfully the Dream were even worse at 27% and the 1st quarter finished 14-14. We lost sw12 at that point in the game thread, and I don't blame him. The one bright spot was Wauters, who seems to be a good shooter and surprised me by easily knocking down a three.

Things improved a little in the second quarter. Young was doing her thing in the post, and her left turnaround jumper gave us 4 straight points. Both she and Wauters were also doing a great work of passing the ball down low, or kicking it out to shooter, and they were the team's backbone until Becky woke up and started playing (I'm sure she was nervous because I was watching). She was 3/4 in the final stretch of the 2nd quarter, and the Stars finished the half only 4 points down (41-37).

In true San Antonian fashion, it was the 3rd quarter that was our undoing. Our defense crumbled and we were unable to keep them off the offensive glass, and the hoop was closed for us on the other end. I looked away in disgust and when I checked back a second later we were 16 points down and McCoughty was all out of bubble gum. Phoenix Stan's comment about our lack of depth was accurate: our bench was only 5-19 for the game, and it looked even worse live. Even Lawson-Wade, one of the starters (benched for the game versus the Sparks), was like a ghost and barely did anything. Most of the game was played 4-on-5, and I don't see how the Stars can win like that.

The fourth quarter was almost an afterthought. Hammon did her best to get us back into the game, and a plus one by her pulled us within 5 with a minute to go, but the Dream caught two more offensive rebounds in their next possession, and that was it. Las Espuelas was probably curled in a fetal position and sucking his thumb if he was still watching the game at that point. Ah well. If you want to read more, here's WNBA's official recap.

There's something else I want to say regarding the transmission: it was pathetic. If Stern seriously wants to publicize this league, then his technical standards should be higher. I was forced to stop watching the game because of the permanent freezes, and the video quality was incredibly poor. If they are able to produce something more or less adequate for the freaking Summer League, then we shouldn't have to squint to see what's happening in that 5cm x 5cm screen. And to make things worse, it was embedded and thus it was pretty difficult to modify to change the zoom.

And don't get me started on the absence of the nationally televised games in the archives. I'm sure there are copyright issues to consider, but that's the league basically giving up on its international fans. I'm sure they thing there aren't any... Meh. The announcer was a homer and not that great, but that was actually sort of comforting. It felt like the good ol' NBA to me. There's no excuse for the inability of the cameramen to follow the action, though.

3rd - Becky Hammon: 23 points, 5 assists. The Stars depend on her to create, and she delivered. She's only 3rd because of her 6 TOs and her inability to hit the 3 (1-8). Still, it's obvious even to a newbie like me that the Stars will only go as far as Becky leads them to.

2nd - Sophia Young: 20 points, 6 rebounds. 8-for-13 shooting. An incredible talent, but she didn't seem particularly focused that day. We need more than 6 rebounds from her, and she needs to box out opposing players properly.

1st - Ann Wauters: 21 points, 7 rebounds. 9-for-14 shooting. By far the best Star in that game. She hit just about every shot given to her, and she was just about the only Star that didn't seem completely lost on defense. Stan was 100% right about her: she has range, and plays within her limits. Loved her.

Bonus - Angel McCoughtry: 34 points on 12-for-18 shooting, 7 rebounds and 4 assists. Damn, this girl was amazing. She dominated us, and it was blatantly obvious why she was picked 1st overall in this season's draft. Great first impression on this widdle Argentine guy.

In short, it wasn't a pretty game, but at least I was able to watch it. Unfortunately our game versus the Sparks must've been nationally televised, because it wasn't broadcast through the Net and is therefore not available in the archives. The best I could do was Gamecast and play-by-plays - and that was crushing enough. 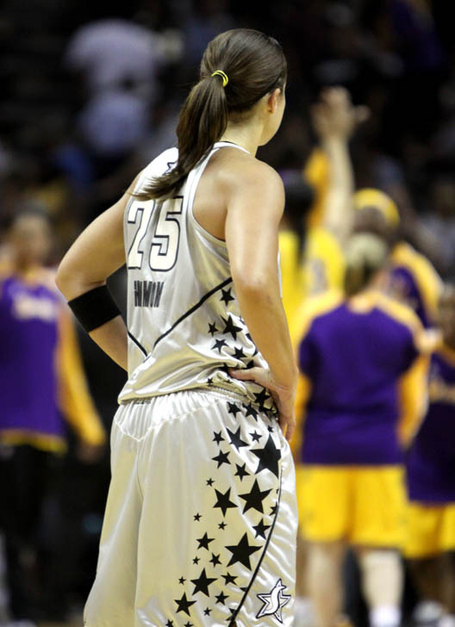 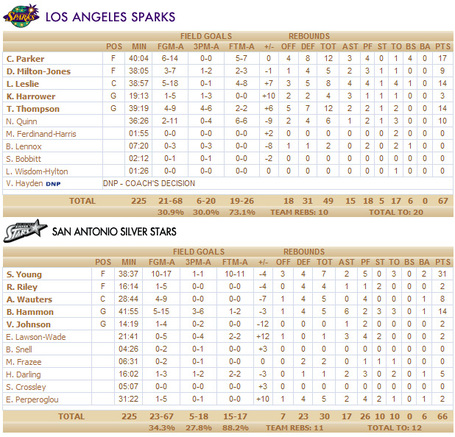 Have I mentioned that I couldn't watch this game because of the WNBA's silly policies? Too bad, because I was really excited about this one. For those of you who don't know, Lisa Leslie will be retiring after this year. She is a 3-time WNBA Most Valuable Player, and the only player in the WNBA to score 6,000 career points. More accolades? She's also a four-time Olympic gold medalist, but I guess no one cares about that.

Lisa Leslie and Candace Parker are the only two players who have dunked in a regular season WNBA game, too. Does that matter? It matters to me. If you want to watch those dunks, I wrote a post about them in my blog, and about dunks in general. I'm not going to rehash my arguments, since they were rather virulent and condescending in tone, but it's annoying that the WNBA claims that they love how the women play classic below-the-rim basketball and then they market the dunks that do happen as if they were the second coming of Dr. J. I guess we'll have to wait for the arrival of Brittney Griner.

Anyway, there would be no Lisa Leslie or Candace Parker for me, but the game was still an epic (low-scoring) battle. Becky had a nice game despite a low shooting percentage, and Candace Parker led the Sparks with 17 points and 12 rebounds, but the player of the game was doubtlessly our Sophia Young. 31 points were just about half of our total points, and she even had 3 offensive rebounds in this game. What a player.

The game ended up tied after 40 minutes, but the Sparks finally won their first game in San Antonio after three years in overtime. There is some controversy about the last play game, where Becky was driving to the basket for a layup and her shot failed to go in. She felt she was hacked, and said as much to the press, but she also said she was more concerned with getting the Stars to the postseason. Becky speaks:

Let's see what our Stars had to say after the game.

Obviously the gals were pissed, but that's in the past now. As Becky said, time to focus on our next opponent, the Shock. And why did all the WNBA teams pick those silly names? (I still love "Dream".)

One of the few WNBA games I halfheartedly watched prior to this season was one of the games the Stars lost to the Shock in last season's WNBA Finals. It's odd how both teams are now below .500 (the Shock are 10-14, we are 11-15) and battling for the last playoff spots in their respective conferences. I'm sure trades/draft/free agency were involved, but I wasn't paying attention when the balance of power shifted.

The Shock come from a win against Chicago on Saturday, but they are a very beatable team. Believe it or not, Bill Laimbeer coached them to a championship last season ("WNBA coach", that's something I wouldn't have imagined as part of Laimbeer's resume a few years ago), but he left this season and Rick Mahorn took over. Rick "Baddest Boy Of All" Mahorn. I think they'll try to convince Ron Artest to sign with them as soon as he retires.

The Shock and the Stars will meet again in San Antonio next Saturday.

The Spurs have a cute section in their YouTube channel where assistant coach Sandy Brondello shares with the viewers her three keys about the Stars' next opponent. Check out what she has to say about the Shock: 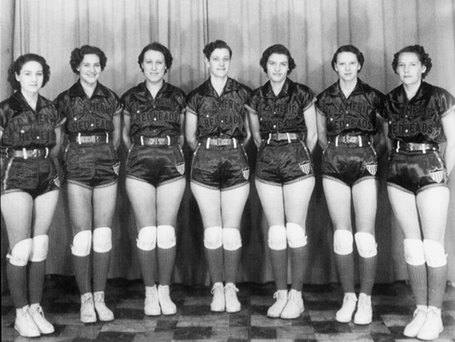 You can't see it, but they're all redheads

I'd actually found this video some time ago, thought it was interesting and saved it for my blog. I considered it appropriate for this post. The WNBA players have little in common with these girls who focused on showmanship, but it's still part of the history of professional women’s basketball in the USA.


Where are the Washington Generals when you need them?

The All American Red Heads was one of the first professional women’s basketball teams. Established in 1936, this exhibition team played until 1986. The Red Heads supposedly began as a joke, when players who worked at a hair salon all decided to dye their hair red and then play a local men's team. They played by men's rules and were a smash success with the audience. C.M. "Ole" Olson, the salon owner's husband decided to take them on tour. They were so successful as an exhibition team that they fostered another team, the Ozark Hillbillies and a third team, the Famous Red Heads.

If you want to read more about them, you can go to their site or read this article.

Phoenix Stan gives us his personal take on the debate, and it's definitely worth reading. So check it out.

That's it for the moment, guys. Go Stars!