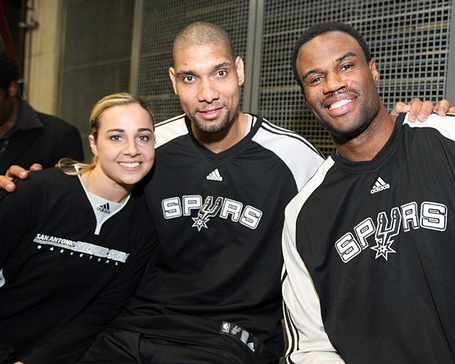 I never realized Timmy and David were soooo not pretty

For some reason my involvement with all things NBA has gone to a whole new level during this offseason. I'm not sure why - maybe it's a slow buildup for my trip to the States, and I'm subconsciously trying to prepare myself for the overexposure I'm likely to enjoy/suffer in those weeks of Intense Basketball Action. I suddenly find myself buying a TV pass for the Vegas Summer League, drawing wallpapers or reading about Spencer Haywood's story.

Or maybe I just have too much free time.

In my hunger for all things basketball I started watching vintage games, championship DVDs, even videos of Stephon Marbury that I'm trying my best to forget. And yet, for some reason, even though I'm an avid Silver Stars highlights viewer, the thought of watching WNBA games hadn't crossed my mind. Then I read Wil Cantrell's great post over at Bright Side of the Sun and started wondering if maybe I wasn't just as prejudiced as the people that post was directed that. Well, guys, no more. Tonight I'm watching the Silver Stars play at Atlanta against the Dream (damn, I love that team's name), and thought that maybe some of you people would be interested, too.

So... care to join me tonight? A traditional hack preview, after the jump:

Why the Silver Stars?

If you are from San Antonio, there's really no choice. The Stars are your team, and you should go buy your tickets now. If you're a foreigner like me, I just know that sports are 100 times more enjoyable when you pick sides, and by simple association the Stars feel distinctly closer to my heart than the Phoenix Mercury. Or maybe you'd rather root for the Los Angeles Sparks? Didn't think so.

Okay, but how good are these girls?

Honestly? I have no idea. According to Terrence Thomas from mySA.com, the Stars are ready to make their playoff push. There are 10 games left in the season, and they currently hold the third spot in the Western Conference with a pedestrian 11-13 record. 9 of those 10 games will be against contenders, too. It's been a season marred by injuries, and the road ahead looks uneven.

We have some momentum going for us, though. In out last game, the Stars destroyed the Mercury on Saturday, a team with the second best record in the WNBA right now and that had spanked them in their previous encounter. The game leaders? None other than Becky Hammon and Sophia Young. By the way, Vicki Johnson played her 400th WNBA game, a league record.

This is my best guess (yes, guess - Hollinger I ain't) at tonight's starters:

I checked and some games will be broadcast for free by WNBA.com. If you're interested, follow this link and click on "live access". Tonight's game is supposedly going to be there, but you'll have to sign up to NBA.com first if you haven't already. I'm not sure what we'll do about nationally televised games, but we'll cross that bridge when the time comes.