So here we are again. Another Thursday, another evening spent scouring the internets for basketball stuff. The offseason really sucks. In the midst of your waiting, we've found some things on the internets worth letting you know about, so you don't have to scour for them too.

Here's an appropriately named song from an obscure, now-defunct British band while we're stuck with no Spurs basketball for a couple more months.

Once again, ATS provides an alternative, by way of this comment. Led Zep's "No Quarter" - but instead of the original, I'm being rebellious in giving you the cover by Tool.

And here's a classic suggested by jrw. (no embed code)

48 Minutes of Hell " Ian Mahinmi to Stay with Les Bleus
Yawn is getting some more experience this summer. Johan Petro was cut from the French team, allowing Mahinmi to stay on the roster.

48 Minutes of Hell " Beautiful Games
Graydon is back, with comparisons between a championship football(that's "soccer" for us Yanks) club and the Spurs.

48 Minutes of Hell " Ordering the Acronyms: Are FIBA and FIFA Useful Analogues?
Brian Phillips from runofplay.com comes along to expand upon Graydon's earlier soccer-basketball analogy.

48 Minutes of Hell " Leaner, Quicker, Stronger
Tim Varner is excited about the prospects of a quicker Spurs defensive unit.

San Antonio Spurs Analysis - Odds to Win NBA Title Shortening
In late June of this year the San Antonio Spurs acquired Richard Jefferson and their odds to win the 2010 NBA title have been shortening ever since.

Debate Round 2: "The Memorial Day Miracle" vs. "The Horry 3" [Project Spurs]
Jeff Garcia continues the debate on great shots in Spurs history.

But The Game Is On " Should the Spurs Be Shopping Tony Parker?
Ginobli is 32 years old and has a horrendous injury history, so it’s logical that the team would want to get rid of him even if they didn’t trade for Jefferson. -- That sums up the amount of intelligence that went into writing this one.

Network analysis applied to basketball offense - Pounding The Rock
And you thought relating traffic signals to basketball was off the wall.

Manu interview.... - Pounding The Rock
alamobro links us to an interview Manu did recently, including how he feels about his recovery.

Wallpaper: Dismantle Opponents. Build Titles. - Pounding The Rock
BlaseE get crazy with photoshop, and designs a great wallpaper based on the Spurs' versatility.

Yeah, it's a slow week around these parts.

Sleeper sell - Blog a Bull
Are the Bulls truly a sleeper if they're own expectations are merely making the playoffs?

How will Quentin Richardson fit in with the Heat? - Peninsula is Mightier
Apparently, Miami fans think Q-Rich will be there for more than 5 minutes.

Will Iverson Land in Charlotte? - Rufus on Fire
Apparently AI is going to choose between Charlotte, Miami and the Knicks.

Clippers Welcome Rasual Butler to LA - Clips Nation
The Clips are serious about trying to win?

Bruce Bowen Turns Down The Celtics? - CelticsBlog
Bruce Bowen declines Boston interest, looking to be the next PJ Brown? Also in this article: Bruce's possible retirement.

New Blazers Jerseys: Hot or Not? - Blazersedge
Portland gets new "alternate" jerseys. I would say "throwback", but they definitely aren't that.

Przybilla — I - Blazersedge
Timbo at BE has been doing a bio series on Blazer players. A very in-depth bio series. This is part 1 for a guy that's long been a personal favorite of mine.

Przybilla — II - Blazersedge
Part 2 of the biography started at the previous link.

Phoenix Suns sign Taylor Griffin - Bright Side Of The Sun
Yep, they're still the Suns.

CBA CLE Basics - Bright Side Of The Sun
Basics on the NBA's CBA, and a good read on how crappy teams manage money.

What type of fan are you? - Denver Stiffs
Personality questions? It must be the offseason.

NBA.com: Where they sit after summer
I think I'd be more surprised if the NBA's media wing was not overrating the team that Lebron is on.

RealGM: Knicks Only Remaining Suitor For Sessions?
Whatever happened to the Bucks supposedly giving RJ to us so that they could re-sign this guy?

The Painted Area: FIBA 2010 Worlds Qualifying Update
A bit early, but it's interesting to see who's qualified so far.

Hardwood Paroxysm " D-League-O-Rama-Rama: Rockets’ Firing of Clay Moser in Rio Grande Valley Is Indicative Of Imperial Influence
Matt Moore writes an interesting article about how Houston has decided to use their D-League affiliate.

Who is the NBA's version of Usain Bolt? - Ball Don't Lie
Skeets asks who the fastest player in the NBA is. Tony is one of the players mentioned, as usual.

Operation Facelift - TrueHoop [ESPN]
Kevin Arnovitz discusses what the Clippers have done this offseason, most notably what they turned Zach Randoph's contract into.

Defining Success " The Two Man Game
A take on how the Mavs can be successful. And yes, it's serious.

Three questions for the upcoming season - Hornets247.com
What the THN blogger for the NOOCH is thinking.

My Greatest Fear | 3 Shades of Blue
Chip Crain, the author of the Memphis THN affiliate, lets us know his feelings on Zach Randolph.

Shaq Dance Off VS Conan O’Brien, Video | NESW Sports, Sports Videos
Shaq has been pimping his new show on ABC called Shaq Versus, and thought it would be a good idea to have a dance-off with Conan.

Building block of life found on comet | Science | Reuters
LOS ANGELES (Reuters) - The amino acid glycine, a fundamental building block of proteins, has been found in a comet for the first time. Crazy Stuff.

Who knew badminton took this amount of coordination?

Pic of the Half-week

Look, it's Manu raising a trophy. This is something we like, yes? 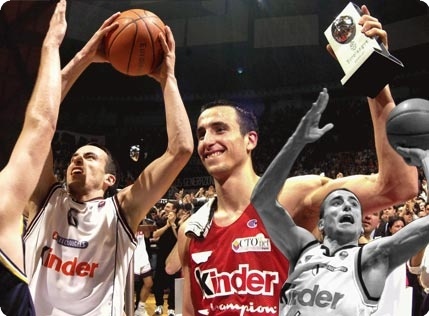 via www.euroleague.net
Well, that's it for now. The full-week version of TWSS returns on Monday.