My Team Is Better Than Yours: Golden State Warriors Edition

Share All sharing options for: My Team Is Better Than Yours: Golden State Warriors Edition

Rikiddo and some other people think Golden State will be a playoff team. I'm very skeptical of this claim. Maybe researching this preview will change my mind though. I do know they had two Anthony's absolutely dominate summer league when they were on the court. Randolph was continually getting double doubles and stuffing stat sheets. Morrow set a record with 42 points. 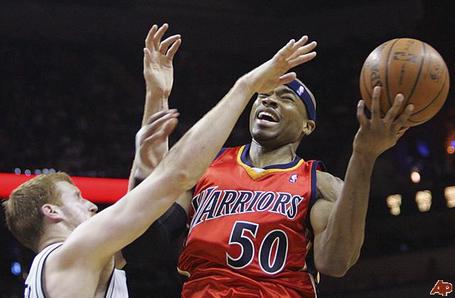 Hopefully I can make better sense of their team than I can this picture. Post foul? Post block? Did Bonner go all final round of the Kumite sand in the eyes tactic on him? via nimg.sulekha.com

This was a really easy music choice. I have had this one in mind for awhile. The main musical pick is Chris Isaak's San Fransisco's Days. I've Included something different if that isn't your thing though.

I love when a team can get to the line, and Golden State was the second best team in the league at free throw attempts. The only problem is that they averaged less than 1 more FTA per game. They were fouling just as much as they were getting fouled. The Spurs are just as bad here though.

Their pace bloats a lot of stats. For example, they are the 11th best rebounding team by total rebounds per game. They are also the worst team in term's of opposition's total rebounding giving up the most offensive boards of any team. They were middle of the road in assists per game, but second to last in opponent's assists per game. All of this adds up to what we all already knew: Golden State had a major problem of playing 150 mph on one end and letting teams get whatever they wanted at whatever pace they wanted on the other. 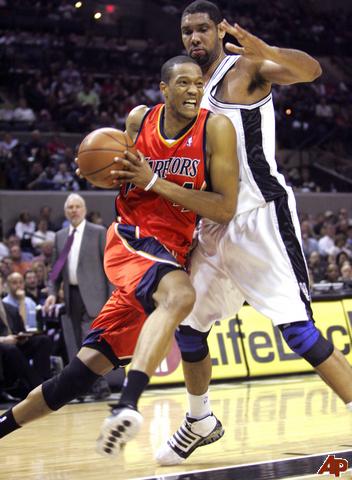 An Informal Study in Facial Expressions 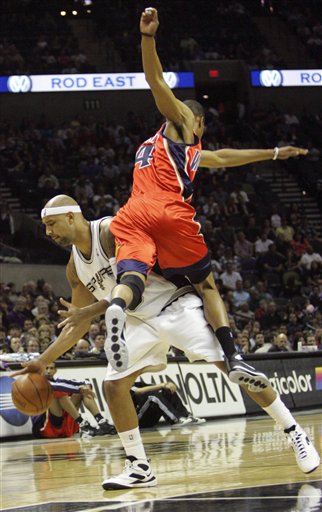 "Jerk, don't you see how much I have to focus on dribbling even without you arabesqueing all over me."
via www.kens5.com

They drafted one player, Stephen Curry. I watched this guy absolutely take games over in college. He is a game changer and a guy who wants the ball at the end. This is an aside, but this trait was the one thing I liked about Drew Gooden last year. He was never scared of any team's defense and was always calling for the ball. You need guys like this on a team. I'm not sure Golden State doesn't already have 8 or 9 other guys that already feel this way though.... Either way, he is a great player and fits the Golden State system. One of his Draft Express weaknesses is that he isn't quite a 1 and not quite a 2. I don't think that will matter much in G.S.'s offense. They don't play defense so it doesn't matter if he can't guard the opposing 2 guard or not.

They also traded Jamal Crawford and Marco Belinelli for Acie Law, Speedy Claxton, and Devean George net. Acie Law is an appropriately to underrated talent. I think he has some potential and always seemed like a quality attitude player. Speedy Claxton is a good back up point guard if he gets minutes in Nellie's offense. Same goes for George.

C.J. Watson is unsigned at this point.

PG: Tony Parker versus Monta Ellis: Advantage Spurs: Monta Ellis is a serious talent. This match-up is closer than it looks. Both guys are likely to get theirs in this match-up.

SG: Roger Mason versus Stephen Jackson: Advantage Warriors: If Stephen Jackson is on, he is unstoppable. We know this first hand. Mason may fit our system better, but if salaries were equal, I'd much rather have Jackson than Mason on my team. We can debate character issues.

SF: Richard Jefferson versus Corey Maggette: Advantage Spurs: I would probably have put this as a wash before doing my research. Maggette was absolutely horrible against us last season. That was against who, Finley? Bonner? If he comes back healthy, he may be able to pass RJ. There was a time the Spurs FO and some fans (me included) wanted Maggette. That seems like a long time ago now.

PF: Antonio McDyess versus Anthony Randolph: Advantage Warriors: Randolph is an absolutely solid player. He needs to improve on defense but likely won't for Nellie. He showed in Summer League that he was on a different level from his competition if you can even call it that. I think Golden State's playoff hopes lie in a large part in his progression and increased role.

C: Tim Duncan versus Andris Biedrins: Advantage Spurs: This isn't close. Biedrins is a fitting big for their system and is still only 23 after 5 years in the league.

Point Guard: Hill vs Claxton and Law: I'm not sure about this one. I hope Hill shows the development and ownership of the backup PG role. Claxton can run the offense and Law is a good developing talent. Curry is added depth at the 1, but I'm listing him at the wing. 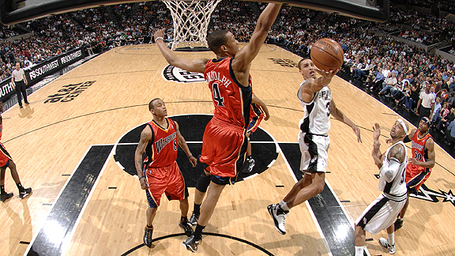 I really like this picture, but I get the feeling this doesn't end in points for us. It's just one image but I see 5 Warriors and 2 Spurs. Hill is collapsing the D, but where is the kick out?
via a.espncdn.com

Wings: Manu, Finley, Hairston, and Williams vs Curry, Morrow, Azubuike, and George: For me, this is probably the closest wing match-up we have had. If Curry delivers and Morrow continues his growth like he seems to be, they will be scary. Azubuike is a serious role player. He is the type of player that might be starting on another team and lose every match-up. It is great depth for G.S. to have him off the bench. He is only 25 years old himself.

Front Court: Blair, Mahinmi, Bonner, Haislip, and Ratliff vs Turiaf and Wright: They are incredibly shallow here but play small ball anyways. They will continue to get out-rebounded like crazy next season. Lots of teams will get second chance baskets against them, and Blair should have some awesome games when his size is even less of a factor.

Coaching: Advantage Spurs. They need to bring in Avery as a defensive coach or let him coach one season. Tell him he can't make any trades and needs to focus on defense. Then let Nellie take back over in 2010-11, and the team will be incredible. See Devin Harris in NJ. 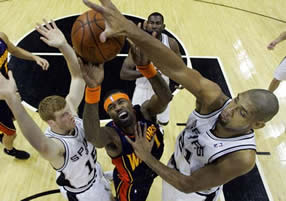 "Yo, Bonner, stand with your arms up between him and the basket, and Finley, how about you keep him in front of you to begin with!" says Duncan coaching the Spurs to a better team defense. via www.csum.edu

Result: They are a fast paced, run and gun team. We are a methodical team that runs "plays". Yes, we are more equipped than ever to run, but it's not like Golden State. They could steal a game from us if they are on fire and we start missing 3's. These games should be wins though. I have to admit that I am more optimistic about their roster than I was before writing this, but without serious efforts on the glass and on defense, they will always just be a crap-shoot. It wouldn't surprise me if they were 6th in the West. It wouldn't surprise me if they were 12th.

Wed, Nov 25 vs Golden State: Last game of a 4 game home stretch. We will have played 9 home games to 4 road games at this point in the schedule and should be looking pretty solid integrating our new additions.

Wed, Dec 16 @ Golden State: Last game of a 3 game road trip and a SEGABABA (@ Suns first). After the back to back we get 2 days off and then 3 games in a row at home so we can push the stars in this back to back if we need to.

So that is my Spurs-Warriors preview for next season. Next up is the Toronto Raptors. We are skipping the Knicks until David Lee gets sorted out. In general, the order will be more flexible going forward. I plan on making sure I've written about a team before we play them in preseason. That means the Rockets and Cavs will likely get bumped up. Everyone knows the Cavs going after the Lakers would have been anticlimactic anyways though.

Past entries in this series: Timberwolves, Grizzlies, Thunder, Clippers, Wizards and Kings.