My Team Is Better Than Yours: Minnesota Timberwolves Edition

Share All sharing options for: My Team Is Better Than Yours: Minnesota Timberwolves Edition

We go from Memphis to Minnesota. We saw one awesome sophomore in the last edition (O.J. Mayo), and now I get to look at one I like even better (Kevin Love). I like Al Jefferson a lot too and think that Minnesota has him in a Spursian type contract of great value for the right price. I've always had a preference for Corey Brewer as he was touted as a long armed, 3 point shooting, defensive specialist when he was drafted. I've read his progress is sketchy though. I know Randy Foye and Mike Miller are gone, but I'm not too sure who is new. I'm really curious to do this one.

No research was done on Kevin Love's twitter so this may not be up to date. Please comment if I'm wrong on anything he has updated on his twitter. I do know Rambis is their new coach though.

I have a feeling most people on here wouldn't like this band, but the music for this one is Taking Back Sunday's Timberwolves at New Jersey. It is one of my favorite songs by the them.

They were the second most blocked team and had the 3rd least blocks on defense. We're number 4 though. The Wolves were pretty average in assists and turnovers.

We had lost our first 3 games going into this one. It took two overtimes and 55 points and 10 assists from Parker to get our first win. Mason and Duncan added another 56 points. Al Jefferson (30) and Mike Miller (25) put up 55 for the Wolves. Kevin Love was very impressive for a rookie in his 4th game.

Al Jefferson goes off for another 29 on us. Mike Miller is held to 3 points though. Manu is back, and players still on our roster account for 88 of 98 points. Kevin Love only scores 4 points but gets 10 boards (5 offensive) in 25 minutes off the bench.

Players still on our roster score 92 of the 97 points led by Parker's 36. Al Jefferson drops another point from the previous match up and only gets 28, but we hold him to 6 rebounds. Randy Foye put up 26. Mike Miller didn't play. Kevin Love was held to zero offensive boards. Our bench let this one get closer than it should have losing the 4th quarter 26-16. Anthony Tolliver got 11 minutes if that gives you any indication of the rotation.

George Hill's vicious dunk in slow motion (Timberwolves @Spurs) (via dvyoung05)
This dunk cost Hill many minutes in the playoffs....Nice pass by Manu though. Hopefully this highlight serves as an appetizer for '09-'10 full of Hill and Manu off the bench highlights.

No Duncan, Manu or Al Jefferson is just a gut punch as an NBA fan wanting to see good basketball. 61 of our 93 points are still on the roster. Parker scores 24 to lead all scorers. We are terrible from 3 and Minnesota outshoots us but we win by outshooting them on the charity stripe and getting offensive boards. That felt weird to write that. Kevin Love starts in Jefferson's place and goes for 17 points and 19 boards (3 offensive).

They drafted Ricky Rubio, Jonny Flynn, Wayne Ellington, and Henk Norel. A lot of people are crazy for Ricky Rubio. Last I read, he is definitely getting out of his current contract, but that doesn't mean he is playing in the NBA. I've also heard he is trade bait. I somewhat doubt this. Jonny Flynn is another PG, out of Syracuse. According to DraftExpress, he led the NCAA in assists per game and 19th in points. He is said to be turnover prone but he seems to be an offensive weapon, creating for himself and others. Wayne Ellington is a SG out of UNC. I'm not sure if his 3 pointer has NBA range, but by his college numbers, the guy appears to love to shoot. DraftExpress says he was the most efficient shooter they looked at in the draft, but he had half as many possessions as some of the other guards they looked at. Henk Norel is a 21 year old PF/C from the Netherlands. He is 6'11" but only 212 pounds. DraftExpress says Norel is a best case Jeff Foster and worst case Oberto. He supposedly has great touch and movement off the ball but lacks offense. I don't know if he will be playing in the States next year or not. They have the roster spots but he may be better served to stay in Europe.

They also traded Mike Miller, Randy Foye, Mark Madsen, Sebastian Telfair, Craig Smith, and Etan Thomas for Darius Songalia, Oleksiy Pecherov, Quentin Richardson, Chucky Atkins, and Damien Wilkins. Mike Miller, Randy Foye, Craig Smith and Sebastian Telfair are all notable losses as they accounted for 46.1 points, 15.2 rebounds, and 14.5 assists per game. Songaila is a solid addition. Richardson is a decent addition. He can score. Atkins is a great veteran presence to back up their young guards and hopefully serve as a mentor. Someone needs to tell Pecherov he isn't Dirk. He is 7' and has taken just under half of all of his FGA's from the 3 only making ~30% of them. He will see limited minutes behind their front court though.

PG: Tony Parker versus Ricky Rubio: Advantage Spurs: Tony gets to show a 19 year old European top PG prospect what the NBA is like. This should be a fun match up because of the international hype these two bring.

SG: Roger Mason versus Damien Wilkins: Advantage Spurs: This is who ESPN says will start for you, Minnesota. I think you would be better off with Ellington or Richardson here. Wolves fans, please comment on this position. Mason is better than all of them at this point though.

SF: Richard Jefferson versus Ryan Gomes: Advantage Spurs: I know very little about Gomes. On a stat comparison, I'm going with RJ. Gomes will definitely be in a position to up his scoring and take on a big role if he has it in him. 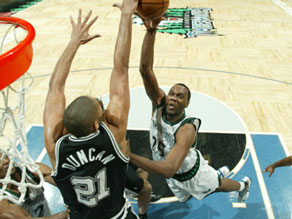 That is a block. via www.nba.com

C: Tim Duncan versus Al Jefferson: Advantage Spurs: Duncan gets the advantage, but this is the closest match up we have had for him yet. As a basketball fan, I hope Jefferson stays healthy all season and that he dominates like I think he can (just not against us). He went for 29.0 and 11.0 last year against the Spurs.

Point Guard: Hill vs Flynn, Bobby Brown, and Chucky Atkins: I'm going to give this to Minnesota. They have two players that can take good minutes off the bench. Atkins is a smart veteran and Flynn is a top prospect rookie. Hill is more than welcome and more than capable to prove me wrong though.

Wings: Manu, Finley, Hairston, and Williams vs Wayne Ellington, Corey Brewer, and Quentin Richardson: Spurs win this one hands down.

Front Court: Blair, Mahinmi, Bonner, Haislip, and Ratliff vs Darius Songaila, Brian Cardinal, and Oleksiy Pecherov: Songalia is decent but so is everyone on our much deeper rotation.

Coaching: Advantage Spurs. Back in the very early 90's when I was 7-9 years old, my older brother started collecting basketball cards. Kurt Rambis was like a bad omen card. My friend and I burnt one, ripped it to shreds, and flushed it down a toilet when we were teenagers upon finding it amongst our other non-binder worthy cards. That fills my terrible Kurt Rambis/ teenage pyro anecdote quota for the year.

Result: Spurs win all three games. We get to see some exciting front court match ups if everyone is healthy, but the Wolves back court is too unproven and just not deep enough.

Tue, Dec 29 vs Minnesota: After a back to back of @ Bucks and @ Knicks, we have one day of rest before this game.

Fri, Mar 12 at Minnesota: First of a back to back with Clippers at home next. After the Clips, it is one day off and then another back to back (@ Heat and then @ Magic.

Mon, Apr 12 vs Minnesota: Last home game of the season.

So that is the Spurs-Wolves preview for next season. Next up is the Golden State Warriors.

Past entries in this series: Grizzlies, Thunder, Clippers, Wizards and Kings.