Another week, another TWSS post. You have no idea how difficult it is to find worthwhile links when the most exciting thing that happened in the entire week is that Rashard was suspended for 10 games. I guess it's a testament to the sheer collective might of the blogosphere that we're still able to crank out two of these per week.

A new wrinkle for the TWSS post: to separate the truly can't-miss links from the its "meh" companions, there'll be a "Pound the Rock" picture next to them. It was based on this photo taken by teejayscool, and was used with his permission. Let me know if this works for you.

A quick note: we're already building a wallpapers page, so if you have any of your own, please contact me so that we can put them up. I like some variety in my desktop, and I'm sure I'm not the only one. Oh, and check out the new countdown clock on the left sidebar - 79 days left? Really? FSM, that's a long, long time.

More links you can shake a mouse at, after the jump.

ATS picked the music this week. Don't blame me if it's not nearly as awesome as the freaking Batman singing. Click on play and enjoy.

Yahoo! Sports: Spurs hope to net nice return on remodeling job
Johnny Ludden does his thing. A must-read for every Spurs fan.

48 Minutes of Hell: Mahinmi to Join National Team
Tim Varner on Parker and Mahinmi's offseason with their national team.

NBA.com: Spurs reign supreme among the haves of the league
"So, what was this offseason about in the NBA?"

Sir Charles In Charge: The 5 Most Reliable GMs in the NBA
"In the NBA good general managers are like Eminem fans at a Mariah Carey concert. Hard to find. Which is what makes the following five GMs so valuable." RC gets some luv.

The News-Herald Sports: Cavs likely to pass on Bowen
...And the Spurs?

Slow week at PTR - but we're only gathering out strength for the long season ahead.

Pounding The Rock: What is a Point Guard?
ATS talks about point guards and their roles in the Spurs.

Pounding The Rock: '09-'10 Spurs Schedule by Way of Embarassing Charts
A look at the Spurs '09-'10 schedule with charts/graphs to gain a better understanding of the pacing and strength of the schedule.

Peachtree Hoops: Strangest/Funniest moment of the Hawks 08-09 season not involving a bird
Manu's kiss to Bowen gets rave reviews.

Blazersedge: One Lesson From Brandon Roy's Contract Negotiations
Another lesson: It's good to be a star in the NBA.

The Dream Shake: Memo to Rockets fans: This season, you're going to mean more than you think
Probably wishful thinking, but I love the attitude. Go Rockets.

Clips Nation: In the Absence of Basketball News, Let's Discuss Grammar
Yup, it's the offseason. (I wholeheartedly agree with Mr. Perrin, though.)

Blog a Bull: If I were Jerry Reinsdorf (a double duty fanpost)
There are many things I don't like about BaB, but I have to admit I admire the enthusiasm of the Bulls fans. Good post.

SLC Dunk: Deron Williams laughs in the faces of the basketball gods
What can I say, I like Deron Williams. And people say Tony's offseason is dangerous... (Kyle Korver playing dodgeball? High comedy.)

Ridiculous Upside: D-League vs. Europe: Another Look
Sometimes I'm scared at how much Jon L writes every week. He's some sort of blogging machine no one can hope to match. Anyway, this is an interesting post where he analyzes whether the exodus of so many D-League to Europe is actually a good thing, given how many NBA teams are going with smaller rosters. Check it out.

Ridiculous Upside: Ridiculous Transactions 8/1-8/7
"A look at transactions involving D-League and other "non-NBA" players from the past week."

Ridiculous Upside: Coming to the defense of the Memphis Grizzlies. Seriously.
"If you know the right people, having five extra people on payroll isn't necessary."

Motown String Music: Why is your head so bald? The Charlie Villanueva Hairless Wonder Contest
"Charlie Villanueva is holding a contest on twitter to see what he would look like with (photoshopped) hair as he has alopecia which caused him to lose all his hair." Photoshop can also be used for evil.

Silver Screen and Roll: Ron Artest Has Lots of Extra Jewelry
"Ron Artest gave away a diamond-encrusted watch, but he's not the only generous one around here...." Ron, crazy but lovable.

CelticsBlog: 'Toine's Shine and Blackout
Because there are no 4's...

Sactown Royalty: The Difference Between Kurt Rambis and No Kurt Rambis
"Rambis signs with Minnesota. The Kings couldn't have afforded him anyway." I could've titled this: 'Damn it's good to sit next to Phil Jackson.'

SI.com: Rasard Lewis' positive test not a harbinger of NBA drug scandals
"Has the stench of performance enhancing drugs penetrated the NBA? Somehow I doubt it." 1.6 million dollars... that's got to hurt.

CelticsHub: Rashard’s Roids, Powe and Bowen, and What in the Heck Do you All Like So Much About Marbury?
Zach Lowe talks about Bruce Bowen, if you read far enough down.

Fanster.com: Phoenix sports fans find themselves in dysfunctional relationships
"Deciding to be a fan of a sports team is like entering into a serious relationship. Just like when a person dates someone, fans have to decide to give up their evenings to spend time with the team, they spend money on meals and drinks. And if things go wrong, sometimes they even have to pay for therapy because of the heartbreak and turmoil."

Full Court Pest: 12 Ways To Fake Being A PRO Basketball Expert!!
This is old, but I hadn't read it. It's pefect. Recommended.

Basketball-Reference.com: 40 Most Underrated & Overrated Seasons of the Decade
Damn, why did we let Barry and Oberto go? We had better keep Bonner after reading this post.

Basketball Prospectus: The New NBA Schedule
Some pretty crazy statistical analysis. Guess who they picked as the champs?

TrueHoop: Lessons from the Schedule
rikkido is fed up: HAHAHAHAHA!!!! Henry Abbott is on the hilarious train as well. I'm still waiting for them to go "Oh our bad, that's actually COOL that they called off their wedding the way they did. Shit, I probably should have done the same thing so that I didn't end up divorced two years later."

Complex Blog: The 50 Most Badass Moments In Sports History
This is badass. I had fun.

Gravity and Levity: Braess’s Paradox and "The Ewing Theory"
Also old, but... it has charts.

Hoopsworld: Free Agency: Who's Left 2.0
Not much left.

CBSSports.com: Owners share grim figures with players as CBA negotiations begin
"The league calls the talks 'cordial and productive.' The union president is encouraged by the 'sincerity.' But sweet talk doesn't sugarcoat the league-wide financial losses that are discussed, Ken Berger says as the negotiations for a new CBA begin."

SI Vault: Most Dominant NBA Player By Decade
And Tim gets shafted. 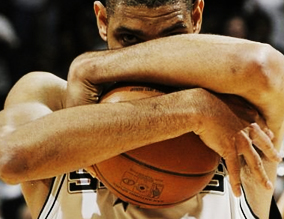 MDA Telethon
Tony Barrio (xman130) continues to work on the fund raising for the telethon on August 26th in El Paso, TX, benefiting the Muscular Dystrophy Association. MDA is an organization that devotes its resources to research and treatment of patients that suffer from muscular dystrophy and related conditions.

Tony's task in this year's fund raising activities is to try to raise $2,000 as an individual. The easiest way to contribute is through the page that was assigned to him linked above. On the page there is a list of the contributors and a graphic indicating how close the contributions are to reaching the goal. Contributions can also be anonymous (the names will not be displayed on the page) and are tax deductible, at least in the US. As last week, check it out.

Dominican Chronicles Vol 4: The Black Guy issue continued
Claudio at Live Above Mediocrity -- He always has thoughtful views on ethnic relations in New York City. Claudio occasionally posts over here on the Spurs.

Bleacher Report: No 'Porpoise' For Fighting at Camp Singletary
Michael (AaronStampler) writes some more about this sport I could care less about, but somehow is more popular than rugby in the USA. Weird foreigners.

Bleacher Report: Brandon Jones' Injury Will Complicate Singletary's Life, on and off the Field
"All in all the San Francisco 49ers will be extremely pleased if every training camp practice from this point forward is undramatic as Friday morning's. No freak injuries, no fights, no bizarre demands from Michael Crabtree's cousin..."

RADIO8BALL: The Pop Oracle
The UI on this isn't the greatest, but the concept is just outstanding. Enter a question and the 8Ball kicks out a musical answer.

Hapland
An old flash game, but a good one, and you might've missed it.

Relaxman Relaxation Capsule
Now you don't need to be a villain in a sci-fi story to have one of these!

There, I fixed it
I think I haven't shared this one.

Darth MC Hammer
I don't know why I like this. Sorry.

Shakesperean insulter
Thou art a very ragged Wart. (I think this one was shared by Lauri in a game thread last season.)

Escape the room: Vision
The veteran among you will remember the last "Escape the room" game I linked you to: Sagitario. Well, this one's just as good, as has a more logical solution. Go play it.

Evil parrot
Pets and their owners.

Play Isiah Thomas off, keyboard cat!
I blame Lauri for this one.

Sophia Young Stars for San Antonio
Do you know Sophia Young? No? Well, you should know her. She has more moves than Theo, Bonner and McDyess combines.

Weak Sauce
This is jolly's fault. Don't look at me. 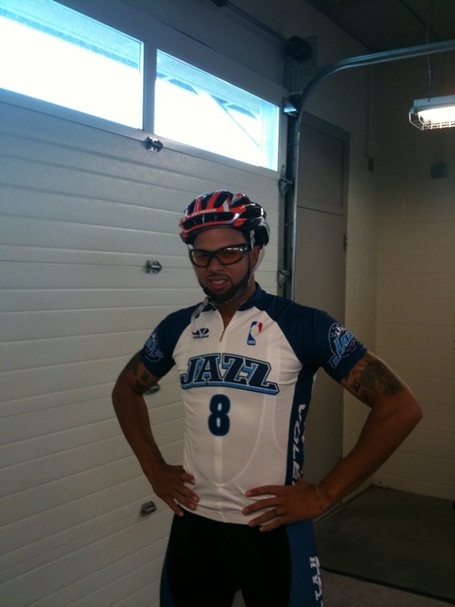 Do you think Wade has enough shoes?
Is there such thing? 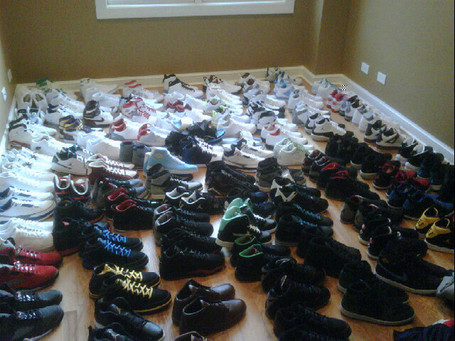 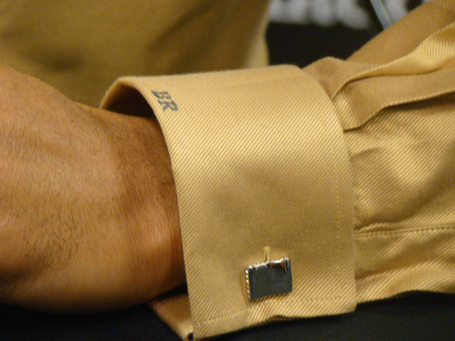 And now to waste what's left of my Sunday on Psychonauts. Ta-ta.