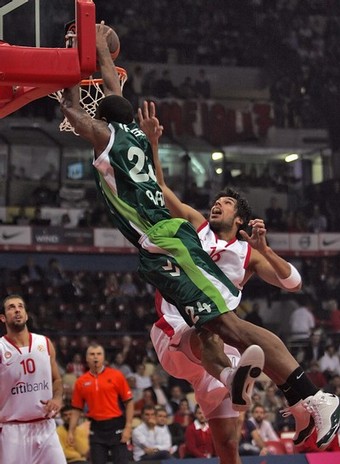 Another guy that can dunk? Is Pop still coaching the Spurs?
[via cache.daylife.com]

The San Antonio Spurs have reached an agreement in principle to sign Marcus Haislip, who most recently played for Unicaja Malaga of the Spanish League last season. What does this mean for the Spurs? Let's find out.

48MoH got a full article up before we did, so be sure to check out Graydon's take here.

Haislip is a guy who might be considered a bust. He was a stud when he played college ball at Tennessee, and was drafted #13 by Milwaukee(we're making a habit of taking what they no longer want) in 2002. He then played 2 seasons for the Bucks, and part of a 3rd season with the Pacers in 2004-05. Since then, he's spent 4 seasons in Europe, the last 2 with Unicaja Malaga of the Spanish League. Draft Express has him ranked #3 of all overseas free agents - by the way, look who's the only big man listed higher - anyone think Buford reads DX? I'd keep an eye on #6 and #7 from that list too, especially if we can't land one of the top free agent NBA big men. Speaking of those free agents, what's the impact of this on team salary?

The Spurs are well over the cap, so the only tools at their disposal to woo free agents are the Mid-Level Exception, Bi-Annual Exception, and Veteran's minimum contract offers. The Express-News is reporting that the deal is assumed to be at the veteran's minimum, which is around $1.3M/yr, and does not impact the MLE or BAE. That means the Spurs are still free to pursue marquee free agents like Rasheed Wallace and Antonio McDyess, among others.

So, here's how the roster is shaping up so far:

If you're counting, that's 12 roster spots that are currently filled, with 4 more available for guys who qualify.

Out of the 3 prospects identified, the one who figures to be impacted most by this move is James Gist. Barring a trade of one of the Spurs' current big men(Bonner could be useful somewhere), Gist's roster spot just got taken. Remember, we still need a starting-quality big man, and Haislip is not a starter. And with the possibility of Splitter coming next year(and the extremely remote possibility that could happen this season), I don't know if we'll ever see Gist donning the silver and black. Haislip seems like a more developed version of Gist, though it would be nice to try and develop Gist more. Gist may be a trade asset at this point as well, but we'll have to see how the Spurs' plan unfolds in the coming days.

What Haislip Brings To The Spurs

One thing that jumps off the page for me is the shooting and 3-point percentages Haislip had in the Spanish League. They weren't as good in Euroleague play, which is pretty disconcerting, but I think Pop and RC know what they're doing here. His rebounding number are underwhelming, particularly for someone with his apparent athletic ability(Thanks to LatinD for finding the video links). His free throw percentage in recent seasons would also seem to disqualify him from being a Spur. I see Haislip as a specialist - one who can probably provide a nice complement to DeJuan Blair in the second or third unit, or when Pop plays smallball.

I'm more convinced than ever that Buford and Pop have some kind of trade in the works, and this move was made to augment the roster for that purpose. Anyhow, it's an interesting move, and makes our team more athletic again. The "youth" movement contuinues. Yes, I know he's 28, but that's young by the Spurs' recent frontcourt standards. He seems like a solid bench player, but don't expect him to be our free agent saviour. This isn't the end of the offseason activity for the Spurs, but it's one piece of the puzzle.