The Bar Has Been Raised

Share All sharing options for: The Bar Has Been Raised

By now, everyone knows that there's something of an arms race going among the teams considered legitimate NBA title contenders for next season. There's also been moves by teams who desperately want to contend, in an effort to make themselves better.

Rumors have been flying, and various jokers like Amare Stoudemire and Ron Artest have been tweeting about wild trade scenarios that had yet to materialize. Extra joker points go to RonRon for making people like me think he was joking about signing with the Lakers, then actually going out and doing it.

And then there's the great Rasheed Wallace sweepstakes, with 'Sheed having his choice of title contenders to sign with. No better way to counter crazy than with crazy and smart. Graydon Gordian seems to think so, and at this point the Spurs are running out of good options, with 'Sheed probably being the easiest of those options, if he can be convinced to come to San Antonio. The money is going to be the same no matter where he goes, so it just comes down to his own personal preference.

Let's review what's happened so far, and speculate on what's still to come for the Spurs.

So where do we begin? Well the Spurs got it started, but let's go over the big moves that have happened so far in this arms race.

Like it or not, it seems as if our trade for Jefferson made some other GM's very nervous. Seems reminiscent of how the Gasol trade got all the other teams to make hasty decisions a couple of years ago. So that's it for the contenders. There's been other moves, but we'll leave that for the "experts" to discuss.

What This Means For The Spurs

The Spurs made a good upgrade at the SF position, one that has been badly needed for several years now. The only thing that would make it better is if Bowen came back and we could dump Michael Finley. As things stand right now, the SF rotation seems to be Jefferson/Finley/Marcus Williams. Depth is still a legitimate concern, but the starting SF position has been greatly upgraded.

After the big trade, the Spurs got lucky in the draft and filled one of the many holes in the frontcourt with DeJuan Blair. But DeJuan isn't a starter, and this team needs a decent big who can stand in there with Tim Duncan and take some pressure off of him on the defensive end.

So how might we find this elusive 2nd big man?

Timmy is one of the best help defenders in the game, so a big who can play excellent man defense would be ideal. We won't need a lot of offense from our 2nd big, but a guy with a decent shooting stroke, who could help spread the floor for Timmy on the offensive end and knock down the open shots, would complete the ideal package. I wonder if there's a free agent available who fits that profile? 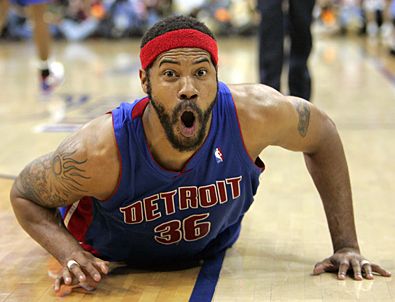 A lot has been written about Rasheed, and whether or not he would be a good fit for the Spurs - in fact, the subject has been beaten to death. But if looking at in only basketball terms, it becomes pretty clear that this is the perfect player to complete our team. Yes, there's a chance he has character/chemistry issues that sink the team's hopes - but those chances seem pretty remote from where I'm sitting. I'd actually be more worried about RJ's assimilation to the Spurs, since Buford and Pop have designated him as our new defensive stopper.

Of course, there are other free agents out there, and this has been discussed at length here. Antonio McDyess, Zaza Pachulia, Rasho Nesterovic, Glen Davis and some others are still available - but we can expect that well to dry up fast right after Wallace makes his decision.

There are still some big men available on the trading block, but their numbers are dwindling as of late. After the Clippers traded Zach Randolph to the Grizzlies, Marcus Camby doesn't look as available anymore. The Hornets are still looking to cut salary, so Tyson Chandler is available. They might also be willing to part with David West, and aren't exactly in a great position to negotiate. Andris Biedrins was almost involved in a trade for Amare, so perhaps he's available as well. There are plenty of possibilities here, but it's late and I don't want to thiink about salary matching at the moment. Feel free to leave all the trade suggestions/scenarios you want in the comments - the more the merrier.

It's pretty clear that the Spurs front office has a plan, even though they're staying mum about it at the moment. In the coming weeks, we may witness that plan unfolding brilliantly, or crashing and causing improvisation. Either way, it will be fun to watch.

Between Tony, Manu Ginobili, Roger Mason, and George Hill, we've got an awesome backcourt rotation. This could be tweaked by an extra PG to offer added depth, and another wing(Hairston? McClinton?) to fill out the roster and spell the old farts. But the Spurs's backcourt is among the best in the league, if not at the top, so this area is most assuredly not a cause for concern.

The Spurs have already had a very productive offseason, and finally seem to be implementing their plan to transition the team into the twilight years of Timmy and Manu, if not beyond. Getting your ass kicked in the first round, then watching the Euroleague star you traded away for peanuts frustrate the Lakers for 7 games will do that to you. Stampler was right, this team needed a beatdown to get back in gear. With that said, the front office has been doing a hell of a job so far this year, but their job isn't done by any stretch of the imagination.

Let's hope the good times keep rolling, all the way to another river parade.