My Team Is Better Than Yours: Los Angeles Clippers Edition

Share All sharing options for: My Team Is Better Than Yours: Los Angeles Clippers Edition

Here we are for episode 3. We know what it is like to luck out and get a clear cut and obvious number one pick, but also know the Clippers are about the worst run sports organization just about ever. Let us take a look back and forward at the Clippers and Spurs. Warning: This is going to be a long one. We played them four times and they made some off season moves. 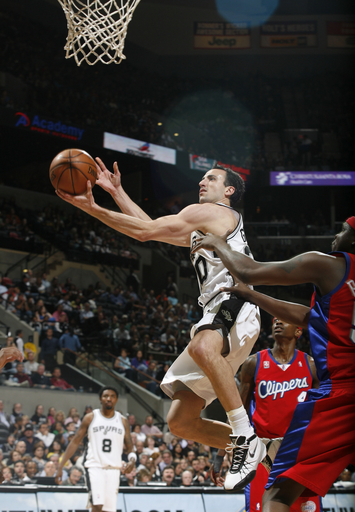 Manu actually got to play in 2 of the 4 games! That's Mason so there is proof it is actually from last season.

Click for Reading Music and This for something different

The Clippers were offensively inefficient but they were 3rd in the league in blocks per game. ATS says blocks are a poor measure of defense. I'd have to agree since the Clip gave up an obscene amount of points (103.9 pg). They didn't foul and didn't get to the foul line. Only 5 players all season were fouled out against them which ranked as 30th in the league. Our Spurs weren't much better at 8 players though. Like the Wizards in our last preview, they gave up a ton of assists on defense. They scored more off turnovers and had more offensive rebounds than us, but just about every team in the league can boast those two claims. They also slightly bested us in opposing team's 3 point percentage. 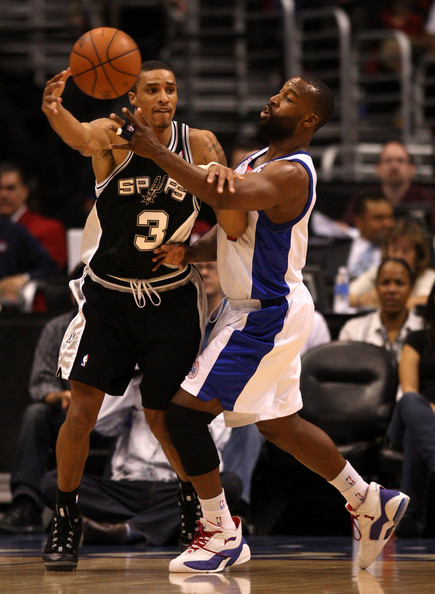 General Notes: We sweep the season series and score over 100 in 3 of the 4 games and keep them under 100 every game. Both road wins were SEGABABA's so there is that too.

This is obviously the game we didn't break 100 points in. Do you have a guess why that is the case other than that it was a SEGABABA as mentioned? Parker and Manu, out. This game was crucial though as it got us to .500 for the first time of the season. We lost the next game against the Nuggets and then won 4 in a row to stay above .500 for the rest of the season. The JV played 23 minutes and shot 2 for 9 if that gives you any idea about the rotation in this game.

When Tony got injured in the Heat game, Hill got to start the games until he came back. This was his third road start and was a continuation of his poor shooting seen in the first two (0 for 5 in the game and 4 of 17 combined). Hill found ways to contribute though and had his season high assist game (8) to lead the team. He only played 21 minutes.

Mason (21 pts), Duncan (20 pts), and Finley (19 pts) carried the team offensively on 25 of 40 shooting and 6 of 10 from beyond the arc. Duncan stuffed the stat sheet with 15 boards, 4 assists, and 6 blocks, but didn't have a single foul. Actually the Spurs were 6 of 6 from the line and the Clippers only had 10 attempts themselves. Mason hit the game winning 3 as the headline says. His first of a series throughout the season. The Spurs also gave up an 11 point lead in the last 6 minutes.

Another interesting game against the Clippers. They dominated us or we dominated us in the first quarter scoring only 16 points. We then scored 27 in the second, 32 in the third, and 31 in the fourth. We were down by 1 at half, scored the first 10 points of the 3rd quarter and lead by as much as 24 at one point.

"In the second half, they hit everything they shot," Gordon said. "We have to change the way we play our game, like playing better on defense." Wise statement from the rookie.

Duncan had poor numbers scoring and on the boards, but lead the team with 9 assists. We had 5 players (Parker, Finley, Mason, Manu, and Bonner) that scored between 11 and 19 points. We out assisted them by 13.

For the Clippers, Gordon and Thornton each had 21 points. The only three players who didn't play for them were Baron Davis, Ricky Davis, and Paul Davis. I thought that was funny. 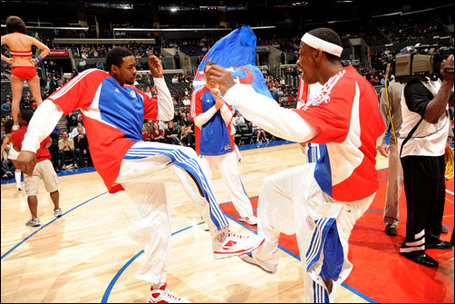 "Even after the Spurs kill us, we'll always have this moment" and Please don't ban me for the cheeleader in the pic. I didn't even notice her until I was proofreading. Digitize her out if you must. via www.nba.com

I'm going to make this one brief. Parker and Duncan dominated or lead the team in a team effort domination. We took 14 more shots, shot 11% better, and had 15 more rebounds and 12 more assists. Eric Gordon and Manu sat this one out. We were coming off a 2 loss streak and were clearly out for blood in this one.

This was the game where Pop really opened up at the end of the game:

"We're a team that understands that we have to be one of the two or three best defensive teams in the league to win a championship, or it won't happen," Popovich said. "On a scale of 1-to-10 defensively, we're about 7½ or 8. But we need to be a 9 or a 9½ by playoff time to be able to compete with the best -- especially the Lakers, who are the best.

"But we're not going anywhere if Manu's not healthy," Popovich added. "I do know for a fact that all four years that we won the championships, everybody was 100 percent healthy. And that's the way it's got to be. If you look at any team that's won it, that's been the case."

This game was a real tease looking back at it. It was Manu's second game back of his last stint with us, and the first one was really rough (1 of 7 for 2 points in 14 minutes of play). This game was Manu as efficient as always or even more so. In 17 minutes off the bench, he goes 5 of 7 overall and 2 of 3 behind the arc for 14 points. Oh yeah, he also threw in 7 assists, 3 steals, a block, and a rebound. You might want to read that again (17 minutes with 14 points and 7 more assists....You may even want to read it again). Parker and Duncan were equally efficient with 13 of 16 shooting and 6 FTA's for a combined 31 points. Duncan only played 14 minutes and Parker only played 17. We out-assisted them by 14 in this one. We lead by as much as 27 in the third quarter before Gooden and Vaughn completely failed on defense in the 4th.

The Clippers were without Baron Davis and Camby was injured in the 1st quarter and didn't return. Mike Taylor, Al Thornton and Zach Randolph all had good games statistically.

Zach Randolph is gone, and they haven't signed some of their crappy players back yet. They've added some dude from OU and brought in Sebastian Telfair, Craig Smith, and Mark Madsen (yes, he is still in the NBA and he makes just under what Bonner makes...I find that comforting). I hear that guy from OU is supposed to be good, but as a UT alum, I don't believe it. I bet he is stupid and smells funny and had Durant , Ford, and Aldridge posters pinned up in his closet behind his clothes. Actually, he is probably too stupid to respect their games. If he had enough sense, he would have built a secret altar to them.

Okay, the guy is pretty athletic...

Bench: Manu, Hill, Blair, Mahinmi, Finley, Bonner, Haislip, Ratliff and Hairston over Marcus Camby, Mike Taylor, DeAndre Jordan, Mardy Collins, Ricky Davis, Sebastian Telfair, Craig Smith, and Mark Madsen. They have some nice players but nothing to be afraid of or anything.

Result: We own this team. I don't expect Griffin to create too much of an impact this year because they are still the Clippers. They aren't a playoff team, and I wouldn't be surprised to see them give up the exact same 104 points per game next year. The only thing different is that they might be more exciting in a Golden State entertaining kind of way.

So that is the Spurs-Clippers preview for next season. Next up is the Oklahoma City Thunder.

Past entries in this series: Wizards and Kings.