I'm sure you have all been anxiously awaiting part 2 of my famous Hipuks' Pictorial Journey (TM). Well, you've wasted your time. These aren't my best pics really, and the subject matter is rather boring because there weren't that many things to photograph at the beach. Well, there were things, I just didn't have the right equipment for it, reason number 1,000 of why I should be rich.

I've also don't have many jokes to go with these pics, so I'll just comment on how the day want and all the little things I'm sure you're dying to know, because the other option would be that I'm engaging in internet narcissism of the highest proportions in which an individual writes things about themselves as if anyone really gave a shit.

This place is called Crystal Cove, it's a cool little beach near Laguna Beach where when the tide recedes, there's lots of tide pools where you can see hermit crabs, fish, anemones, and all sorts of underwater life. As you can guess, I was in heaven. There's No Collecting signs all over the place, and in my racism, I always imagined a Chinese shop owner going around the beach shouting to people " No Collecting! You leave now!".

After going to the beach we ate seafood at Joe's Crab Shack ( Oh why didn't you eat at Little Flaffy's House of Seafood, it's just off this one little street by that other one little street, it's much better than those big ugly chains! Oh yeah? Fuck you). Their whole, oh look, we're so hip we wear tie dye shirts attitude was a little off putting, and I had to wear these big ass paper things as if I was a retard child and oh yeah...When the song Love Shack started blaring, the whole staff starting dancing in a massive display of public shame not seen since the days of the Coney Island's freak shows.

I had never eaten crab before, they give you these yellow things patented by them to open the crab. On their side it's written, " Stolen from Joe's Crab Shack", oh my god, they're so edgy!. Anyway, while working on a piece of crab leg, I put a little too much force and a piece of crab exoeskeleton flew to heights which would've been then envy of the Wright Brothers, almost landing on the waittress at the next table. She said, "Were you trying to get my attention?" and behind her friendly smile I could see she was dying a little on the inside. The crab was pretty good though.

After that we went to a fish store, because we could.

The beach had some really wonderful and weird rock formations. They had all sorts of nooks and crannies which crabs loved to get into ( As many of you promiscuous people have experienced). I was wondering what sort of geological process had created them until I remembered Jesus created this beach like 6,000 years ago. 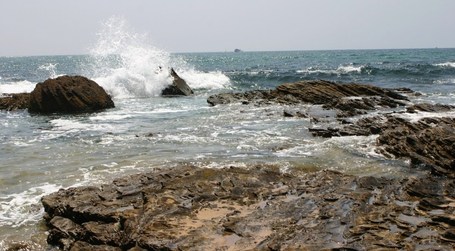 At first I was a little afraid to touch things found on the beach, since the rules were so strict. However, once we found enforcement was lax and other people were doing it, we started disregarding pretty much every rule, and in our rebel coolness destroying countless organisms. 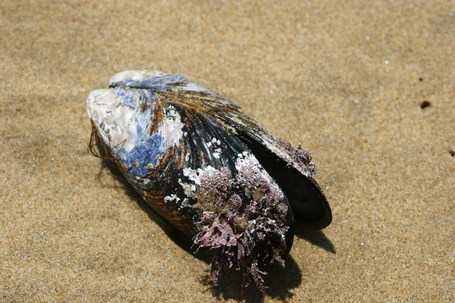 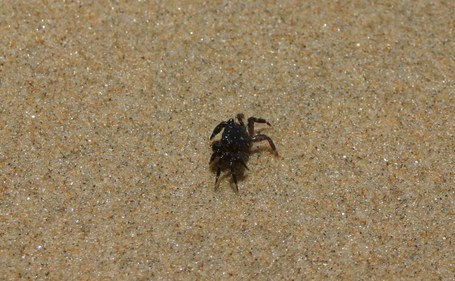 Lots of this guys around. As we were leaving, two crabs got into a fight into a little pool of water and we filmed it with my gf's camera but she has the exciting footage. After the winner gave the other crab an ass kicking, he encountered another crab who was coming into his turf, the naive intruder attempted to put up a fight but also got his ass kicked, after which point he said " Fuck it, it's not worth it" and walked away, sideways. 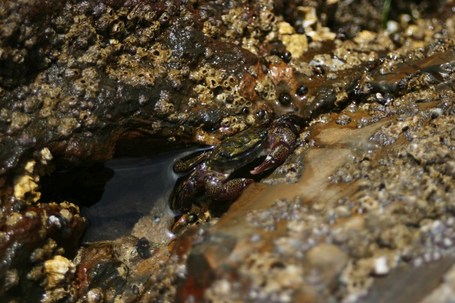 Did you know when a crab gets drunk, he walks forward? 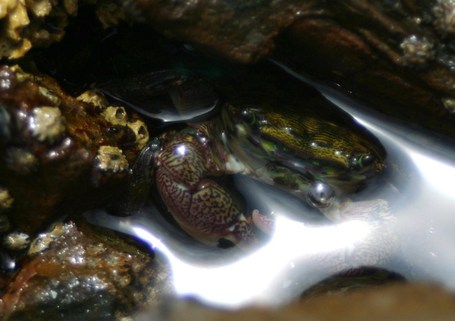 Really cool rock formations. The whole time I kept thinking, I wish I had a hammer so I could brake some off and put them in my tank and at the same time destroying the enjoyment for future generations. 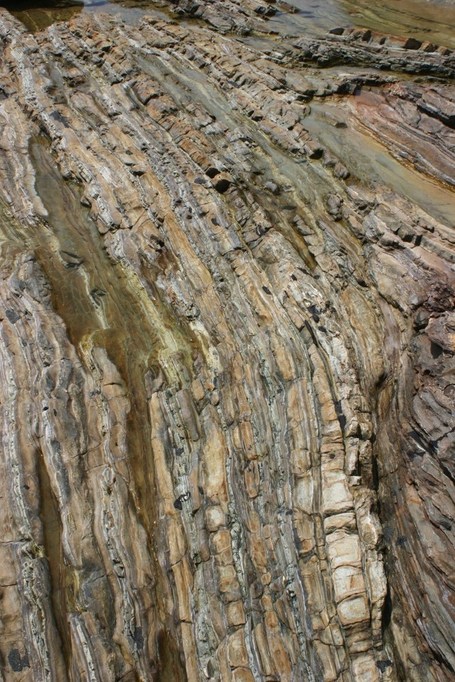 If you add a ton of contrast, the above picture looks like this. Way better, but it feels fake to me. I'm weirdly ethical about pictures, and try to keep them as close to the original as possible. I guess I'll never be popular on Flickr or MySpace. 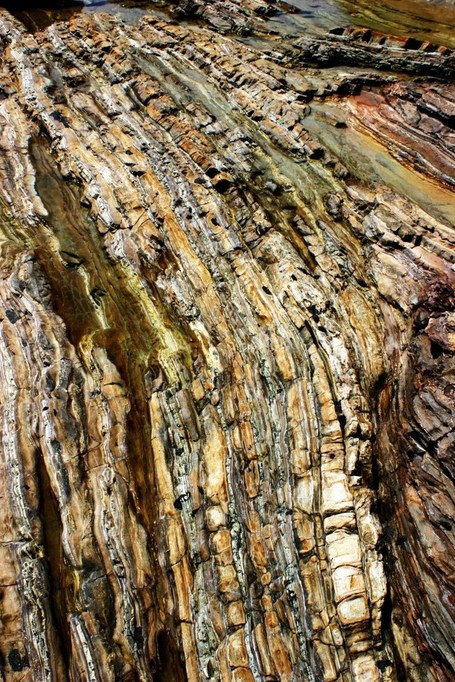 Another very nice rock formation. It was a female dog to walk on this, I had to take my shoes off so as to not get them wet, resulting in pathetic cries of pain with each painful step, just to see some little hermit crab or anemone.

And with the above sentence, my reputation as PtR's cool guy is cemented. 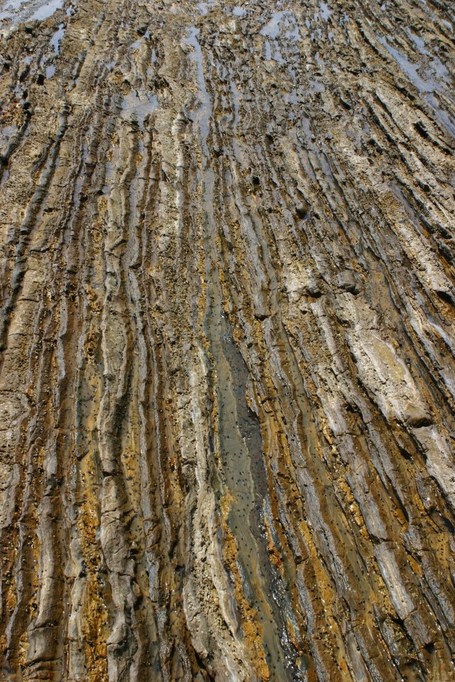 Most people hang out around here, as there were lots of tide pools. Remember about the strict rules of no collecting and no touching the wildlife? There was a group of kids running around and being stupid, as kids often are. So their mom goes like, what are you doing kids? And they go, hunting for crabs! 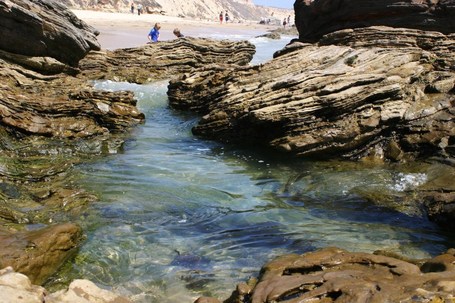 An anemone. Yes, you can touch them, their tentacles are sticky but they don't hurt. I'm sure a perv or two has had fun with these. 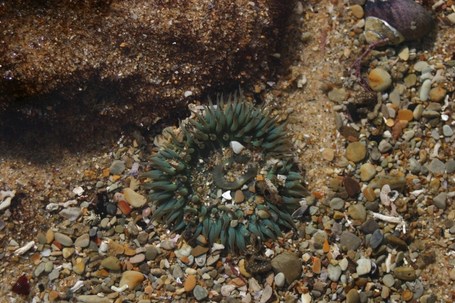 This one was bigger and more striking than the other one, but those white marking didn't look very inviting, so I didn't touch it. 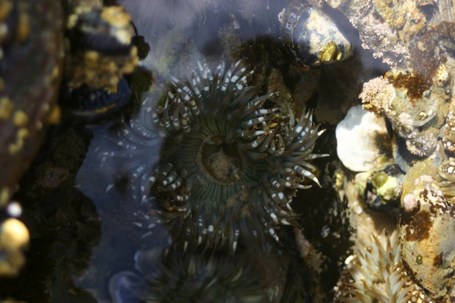 This was a particularly cool tide pool. Lots of anemones and soft corals growing in there.

One thing not show in these pics is the amount of cool hermit crabs going around, they were too small for me to photograph with my crappy equipment, but I overheard a kid who was taking one home. I smiled in the satisfaction of knowing it would soon die due to poor care. 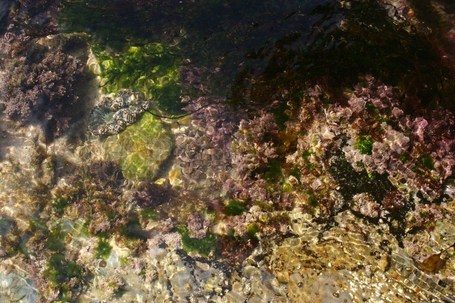 One of the few pics I actually like. It's titled, " A crab of self reflection, or why the military-industrial complex is destroying our country, a study in contrasts".

I like to think of myself as a simple photographer, one without pretensions of grandeur. 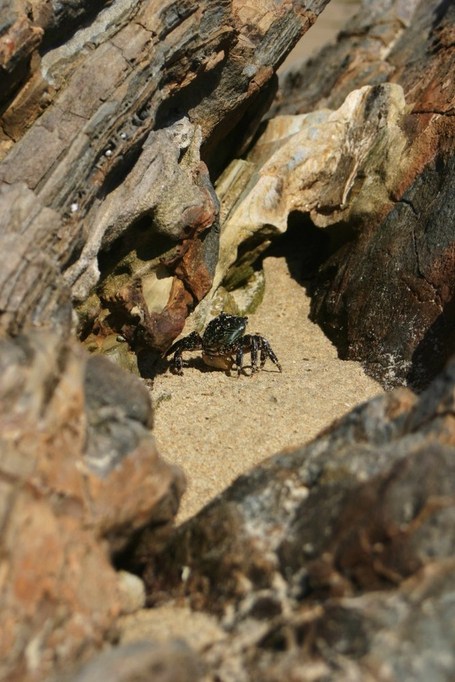 And one final picture of the beach with its cool rocks. You can barely make it out, but on the right hand side on the background you can see some houses. It's a historic district because those houses are pretty old by California standards, and they were made using makeshift materials, giving them a "unique look", as in, they look like shit.

You can actually stay in those houses, they're rented by the State of California. I think it's about $168 a night. Fuck that, I could buy me a tank for that money.

Anyway, if you want more info on that: Crystal Cove Historic District. 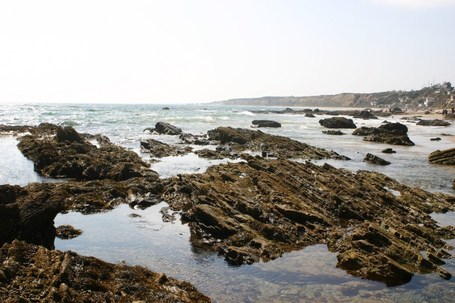 If you had the patience to read through all of that, congratulations, you are a loser. Hope you guys enjoyed it. Stay digitally connected for the third part, I promise it will get crappier as we go along.