My Team Is Better Than Yours: Washington Wizards Edition

Share All sharing options for: My Team Is Better Than Yours: Washington Wizards Edition

Welcome to Episode 2. In case you missed Episode 1 on the Kings, click here. 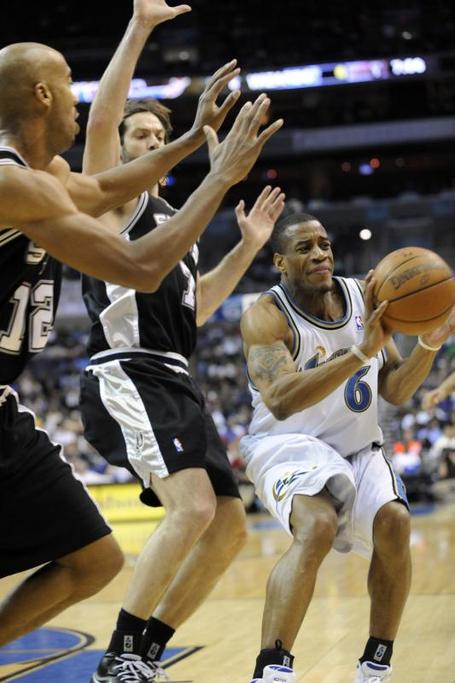 Dang, none of these guys wear the same jersey next season. This is going to be more difficult than expected.

As expected, we dominated them in almost every stat. They had more offensive rebounds but expect this sentence in every single preview. Like the last preview, we have another horrible team. Their best player was out the entire season, more or less. Really, its just a mess. 24th in assists on offense and giving up 103.5 pts on defense. They even gave up the most assists per game on defense. This team has a lot of room to improve going into next season.Game Recaps

General Notes: Both game dates are very close which is kind of sad in terms of general team head to head comparisons. Luckily both were later in the season. No Manu or Arenas in either game. 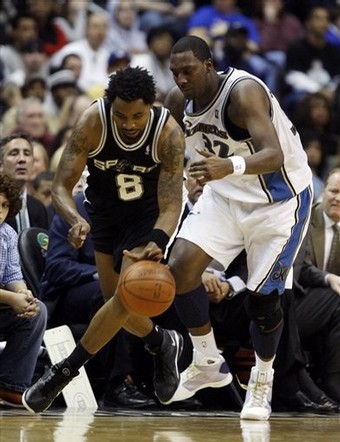 Awkward picture of Mason and only one I found of him from the game. Chip Engelland looks on at Mason's dribbling, footwork. via cache.daylife.com

This was the last game of the rodeo road trip, and the 31 point win was our biggest road victory of the season and our second biggest victory. The Golden State episode is going to be interesting but I won't talk about those games yet. This game was an absolute beat down by Mason in his home town against his former team so as a tribute to him I won't mention another Spur in this recap.

"Oh, the humiliation! The player that got away, Roger Mason, comes back with the San Antonio Spurs and drops 25 points -- on a night the awful Washington Wizards post their lowest points total in six years."

"Mason certainly could have been a fourth option on a night when Caron Butler (24 points), Jamison (16) and Darius Songaila (15) accounted for all but two points scored by the entire Wizards roster through the first three quarters." I lied. Udoka scored 9 points in 7 minutes off the bench almost beating the entire Wizards bench that scored 10 points in a combined 85 minutes of play. Ouch. 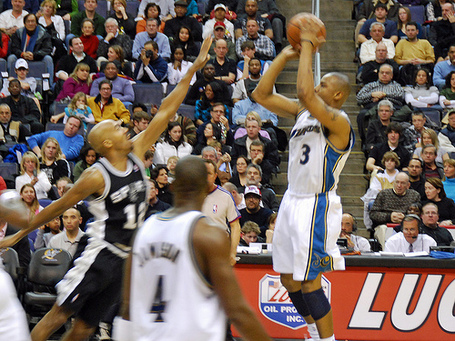 He missed that 3. They shot 0 for 9 in the game from beyond the arc. via geofflivingston.com

Everything in the Game notes is really interesting so here it is:

"The Spurs have won six straight over the Wizards by an average of 16.8 points. ... Popovich, who majored in Soviet Studies at Air Force, took the Spurs to visit the Holocaust Museum in Washington on Friday. ... Washington's Andray Blatche missed four consecutive free throws over a 12-second span in the second quarter during the Spurs' 10-0 run. ... Duncan on the road trip: "Every year, we seem to make something out of it. There's no way to deny it. Every year, we come out of this road trip a better team. We find a way to bond. We find a way to do something on the road. It works for us." ... Mason said he had requests for 50 tickets for the game. "I'm glad we only play these guys once" in Washington, he said." 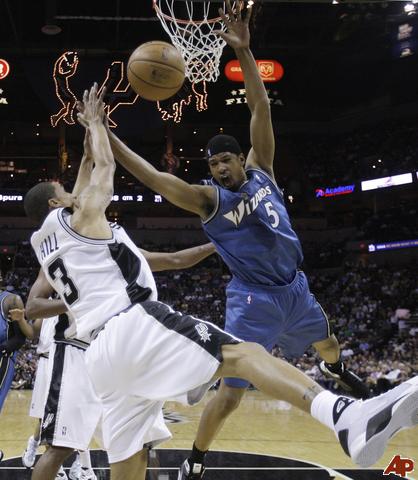 I can't figure out what is going on here. Was he just blocked by someone else? via nimg.sulekha.com

"Where did this one get away? It got away when we first started playing," Jamison said. "When you play an elite team like San Antonio, you've got to make it difficult for them." I could end the recap there but I feel like we need to relish in as many of these before I have to write and you have to read the Orlando recaps. This was a team effort. Duncan only played 18 minutes and finished with 5 points and 5 rebounds. Tony finished with 19 to lead the team. Tony also added 7 of our 27 assists and 2 steals. Our bench took 39 of our 75 shots making 22 of them for 56.4%. This was higher than our starters percentage due to Bonner and Mason 3 of 13 in their 39 minutes of play.

Deshawn Stevenson and Caron Butler sat out this game. The Wizards never had a chance. We finished +10 rebounds, +15 assists, and +5 blocks.

They traded their pick. They add Mike Miller (PTR had a love post for him at one point) and Randy Foye (Simmons thought we should trade Parker to get him...wow, still wow). They have also added our very own Argentine giant Fabricio Oberto to their lineup keeping him in the NBA and not letting him leave to the Euroleague. Nice job, Wiz.

They lose Etan Thomas, Darius Songaila, and Oleksiy Pecherov. Not one of them played more than 20 minutes a game for the Wizards last year.

I'm just going to say it, the Wizards really took advantage of this offseason. They want to win now and they are going to look good next season. I expect them to be the 4th seed in the East. I know that is a bold prediction but Arenas was huge loss last season. They dump some guys they aren't using for two guys they can give heavy minutes to. They also don't have to waste any time on a rookie. It's about veterans and winning now. They might even be better than the Cavs. Actually, they are better than the Cavs if both teams are healthy. Their bench would throttle Boston's too. Washtington, please stay healthy and entertain me this season.

Bench: Manu, Hill, Blair, Mahinmi, Finley, Bonner, Haislip, Ratliff and Hairston over Miller, Foye (may get starting PG duties or starting SG if Arenas wants to run point), Andray Blatche, DeShawn Stevenson, Fabricio Oberto and Nick Young. It's close considering Blair, Mahinmi, Haislip, and even Ratliff all being speculative as to what they can contribute next year.

Result: I am very excited about the two games against this team. They will have a HUGE turnaround this year. I like our odds because Duncan really doesn't have a match and RJ and McDyess aren't blown away by Butler and Jamison.

So that is the Spurs Wizards preview for next season. Next up is the Clippers.