Share All sharing options for: NBA Summer League Recap - It's a Wrap

9 hours short of two weeks and 2690.3 miles later, I'm finally back at home. That was one hell of a trip. I'm wrapping it all up for you right here, right now.

Las Vegas is like no other place on Earth. I didn't really get out at all, but I still got my tastes of it. On the way back from the Whole Foods -- yes, I ate at Whole Foods every day -- I was driving through the hotel parking lot when two guys flagged me down from a passing car. I figure they wanted directions. The passenger says, "Hey. You want a man's diamond ring? Three carats." Me, "Um. No thanks." Passenger, "Real cheap." Yep, I knew I was in Vegas.

The Hooter's Casino and Hotel is a bit of a dive. They bought the old San Remo -- I think that was the name -- and I believe they are in the process of renovating it. They ain't done yet. On the plus side, I was in their "Bungalows" which is a two-story building right next to the parking lot. For me, that was great. I was able to get in and out of my room very quickly. When you stay in a big casino it can take you quite a bit of time.

Women dress differently in Las Vegas than they do in Austin. Just saying it takes some getting used to. I mean, in Austin, I don't see many hookers with their kids in the grocery store. Oh wait, those aren't hookers. That's just your regular mom. My bad.

I read a couple posts regarding the NBA Summer League around the intertubes that made me laugh. One said something like "The Summer League is like a pick up game with room service." The other was "You can't expect intensity in the Summer League". I'm just going to say it once so you all get it. That's bullshit.

These guys, outside of the first round picks, are all playing for jobs. The talent may not be the best, but these guys played their asses off. They aren't just playing for a chance at the NBA. They are playing for a shot at a contract overseas too. This is the 10 days a year where marginal NBA players are doing job interviews. Their livelihood is on the line and they play HARD. Sitting behind the baseline for however many games I saw, you couldn't help but be aware of the physical sound of the game.

Case in point, Luke Jackson. Luke got elbowed in the nose by Brandon Jennings at the end of the Dallas Mavericks first game. His nose was broken and crooked. He played the next day and got hit on the other side of his nose. The blow straightened out his nose and gave him a second black eye. He continued to play the rest of the week without a mask to protect his nose. 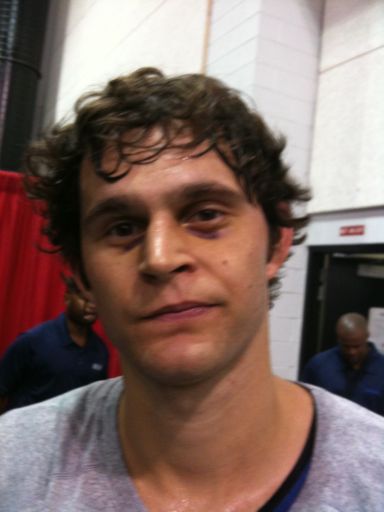 He looks real happy, no? 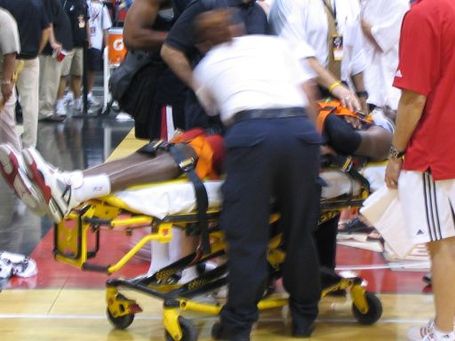 This is what a game saving block got Ekene Ibekwe 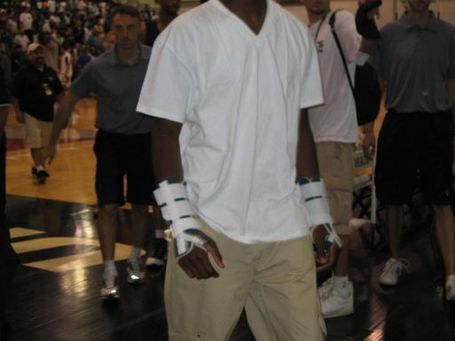 Thankfully, he only ended up with sprained wrists 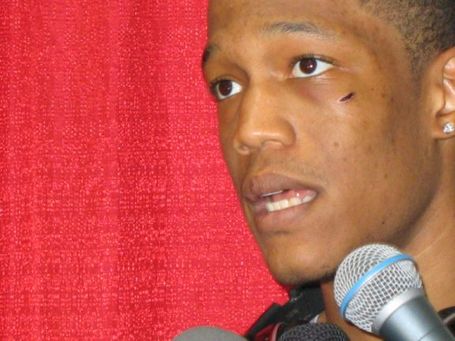 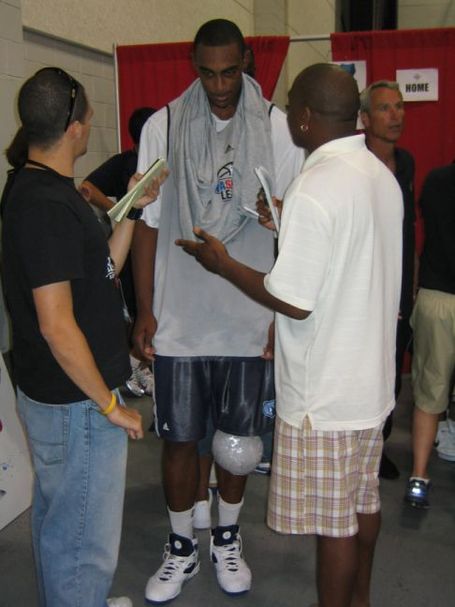 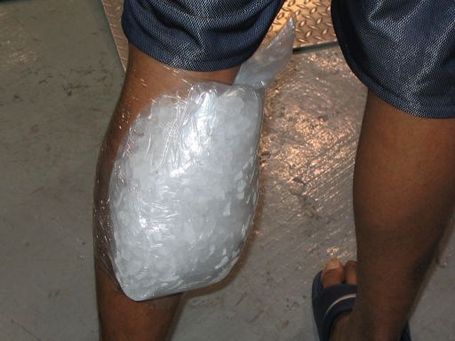 Lots and lots of ice

I met a lot of interesting people. I talked to a scout who said he'd stop by and read my appraisals of players. I talked for a bit with a referee supervisor. I met the guys who run the following SBNation blogs: Bright Side of the Sun, Clips Nation, Liberty Ballers, Brew Hoop, Blazers Edge, Bullets Forever, and Ridiculous Upside. I met almost the entire Spurs front office including Pop, RC, Dennis Lindsey, and Tom James. It's embarrassing to not know who people are. Just saying. I met the Vice President of Communications for the NBA. The person in charge of PR for the D-League. I met beat writers from several papers. I met a host of other bloggers including, gasp, a woman. I met an PR intern from Russia who had the funniest line of the week. I was asking her if she was heading back to Russia and she said she had more traveling she was doing. Then she said this was her second year at Summer League and asked me if I was going to be there next year. I hemmed and hawed and said, "I'm not really sure yet." She said, "Just lie to me and say yes." I met Mark Cuban. I met Jonathon Givony from Draft Express.

One thing I wasn't prepared for at all was the autograph hounds. Man, it just isn't pretty. They constantly yelled at players to come over and sign things. They constantly approached coaches. But, it was later in the week that things got ugly. As players finished their last games, they started yelling at the players to give them their Summer League uniforms. Shirts, shoes, whatever. And it was constant. It was adults and kids. Ick!

I left Las Vegas on Monday morning headed for Albuquerque where I met up with SiMA for dinner. I'm a red chile guy and he is a green chile guy. Draw your own conclusions. When I left Vegas it was 110 degrees. When I hit Flagstaff it was 57 degrees. Between Vegas and Albuquerque I drove through 4 thunderstorms. I believe one lightning strike I saw my have started a fire as the area was smoking as I drove by. I also got this picture for JRW. Yeah, I think I win. 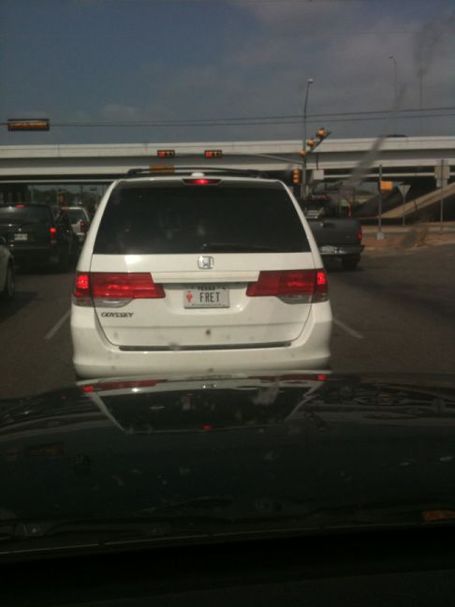 That was a hell of a lot of basketball to watch. I watched basketball for 8 hours for 9 days -- I missed one day. I spent another 3-4 hours a day writing about what I watched. I wrote the most on the day I didn't watch games and this is my third post of the night after getting back. It was fun, but it was a grind.

Easily the highlight of my week was my interview with Ian. He's a very funny guy. He even asked me a couple questions that had me thinking.

I'm not much for the interviewing though. I'm just not comfortable going up to people I don't know and asking them questions. I like talking to people. Conversing with somebody means that information is going in both directions. I need some sort of bond with them. I'm a fan. I'm not a reporter.

Hell, I felt bad about my negative evaluation of Jordan Hill under the microscope once I had the opportunity to interact with him at the concession stand because I realized what a good guy he is with a sense of humor.

I felt like an ass for asking Luke Jackson if I could "Get a picture of your face". He is working to get a job. He has a twice broken nose. They had just lost their fourth game out of four and were made to run wind sprints after the game. Everybody on the team, including Luke, was exhausted. He then had to do an interview with a reporter from Oregon. And then there is some ass who wants a picture of his face. He did it, but I could tell right then that this gig wasn't for me. I never in a million years would have thought I would ask somebody something like that when they were so clearly not in the mood. Seriously, I mean, was my set of pictures above that important? I had talked to Luke a couple times earlier in the week and he is a really good guy. Luke, I'm sorry. Thanks for putting up with me and good luck getting a job.