The Spurs Aren't Done Making Moves This Summer - What Comes Next?

Share All sharing options for: The Spurs Aren't Done Making Moves This Summer - What Comes Next?

With the Spurs' apparent signing of vet big man Theo Ratliff(big thanks to Stampler for the find), the time has come to wonder what else the Spurs' front office has up its sleeve. The reload is apparently not finished, which is exactly what some of us were hoping. There will be another trade this offseason for the Spurs, there's just no way around it now. An inane attempt to make sense of this, below the fold. 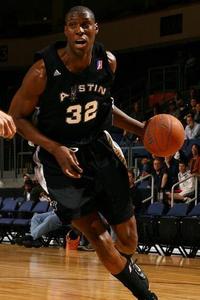 Why do the Spurs have to make a trade? Because there are now 7 big men on the Spurs roster, and even though we don't yet have the details on what Ratliff is getting(likely the minimum), there's no way in hell the Spurs head into next season with all of these guys:

Before moving on, I do want to mention something about Ratliff himself. He's a true center, and even though he's old, he's been an excellent defender/shot blocker in his time. If he still has anything left in the tank, I actually like this move.

With that out of the way, which big man is on his way out? I've given it a bit of thought, and don't like the answer that seems to emerge. I think there are 4 guys who could possibly be involved in trade talks(possibly more than one of them could be involved in the trade, but let's keep it simple for now). Either way, the Spurs are probably going to act on those plans fairly soon. Anyway, I'll start with the guy I see as most likely to be traded - who might that be?

Mahinmi. Did anyone notice how the Spurs sat Blair for two games in the Summer League, but gave big minutes in every game to the guy who got injured during summer league play last year? That smelled fishy to me, but I didn't really understand why they would do that until now: the Spurs were showing Ian off. They've probably been contacted about Mahinmi by a number of teams who would love to have a young, athletic C with his upside. The Spurs may have given up on him after the last 2 seasons of injury, and started shopping him. Also, he's not what I would call a good post defender, since his thin lower body allows him to be pushed around quite a bit. I'd like to keep Ian, but knowing how Pop operates makes me very nervous about this whole thing.

Bonner would be the second most likely big to leave, and if I was the GM, he's the one I would be shopping. He has the biggest contract(read: largest potential trade return) of any Spurs big who isn't named Tim or Antonio, and there are some teams who could use a perimeter-shooting big on their roster. However, Pop has also fallen in love with having such a perimeter-shooting big in recent years. It's a totally unnecessary wrinkle in the offense, IMO, but I just don't see Pop agreeing to a Bonner trade, unless he thinks Haislip can fill the role(with more ath-uh-leticism to boot).

Haislip and Theo(sign-and trade?) could also be involved in a trade, but I think the Spurs actually see something in Haislip, and Ratliff fits the Spurs normal M.O.

Now, there's also a second point to make about the current roster - the Spurs will have 15 players under contract with Ratliff on board:

15 players is the max you can ever have on an NBA roster, and the Spurs always like to have one or two roster spots open. And we haven't even mentioned the other players the Spurs hold rights to. These guys could be treated as trade assets to sweeten the deal for a rebuilding team:

What Do The Spurs Want/Need?

A point that has been brought up in several other threads is that the Spurs could use a perimeter defender. The Lakers have 2(Kobe, Artest), so it would be nice to have at least one guy who makes opposing wings/guards have serious trouble getting into a rhythm. Bruce Bowen, Raja Bell, and Shane Battier are all names that come to mind. Bowen would be my first choice, but I'm fairly certain we can't re-acquire him via trade, so he would have to come back as a free agent. I also like Bell, and think that a Michael Finley/Bonner or Roger Mason/Mahinmi package might get him out of Charlotte, but I'm not sure just how stupid MJ is in his current role. Battier is priced a bit higher, but Houston could be a willing trade partner, due to the Yao situation(not to mention that they owe us after we practically gift-wrapped their current starting PF for them).

A third PG would also be useful, but I can't think of who I would want to trade for right this moment.

The last possibilty I can think of is a very large man(7' or more) with an interior presence being brought in, which would mean trading multiple bigs. Once again, Ian and Bonner are the most likely to be traded.

Every time the Spurs make a transaction that causes speculation, these two questions come up. So, without further adieu:

Might Manu be traded?
There's always a chance, but it's nowehere near likely.

As usual, site participation is encouraged & appreciated. Please feel free to discuss any trade ideas you have, or think the Spurs might be looking at. Don't be afraid to be creative with it. Also, if news appears of an actual trade, please post a link for everyone.