Share All sharing options for: 2009: A Summer League Odyssey

As most readers probably know already, I made the trip to Las Vegas over the weekend to catch the Spurs' Summer League game against the Trailblazers. It wasn't the greatest game from a Spurs fan's standpoint, but the experience was awesome. If I still live within decent driving range next year, it's definitely worth the repeat trip.

Join me after the jump for a detailed account. Oh, and as usual, my camera came along for all the "fun".

For what it's worth, this wasn't the best-planned trip in the world. I had a 50-hour workweek, which was followed by racing home a wall of dust on Friday that was actually staying behind the car at 75mph. That was then followed by an extremely unpleasant digestive condition that saw me spending most of Friday night doing something that usually takes 5 minutes.

Fortunately, after some rest, I was in good enough condition on Saturday morning to get going. And go I did - just not quickly. I've never driven from Phoenix to Vegas before, and didn't have a clue how much time I would need. The Spurs game started at 7PM, and I allowed myself 8 hours to get there. Getting out of Phoenix took forever, due to the ridiculous number of traffic lights placed on the only highway between two of the largest cities in the Southwest. I'd already spent 90 minutes on the road before finally getting out into the open, away from the traffic lights. Then it was clear sailing until just before Hoover Dam, where traffic locked up again. Stupid tourists, stopping and getting out of their cars to take pictures. Who do they think they are? 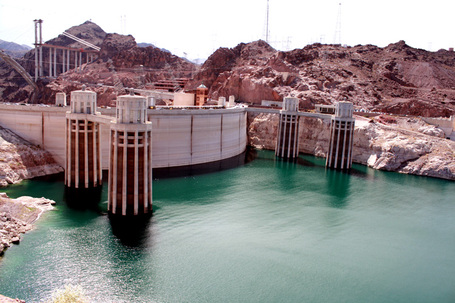 Or maybe the traffic was because of the security checkpoint, which didn't check anything and wasn't secure. Yay.

At any rate, after snaking up the Nevada side of the canyon, yours truly arrived in the suburbs of Las Vegas. The two lane road became a four lane road, then turned into a freeway. Shortly after entering the Las Vegas city limits, I was reminded of my PtR family when a familiar moniker appeared on an onramp: 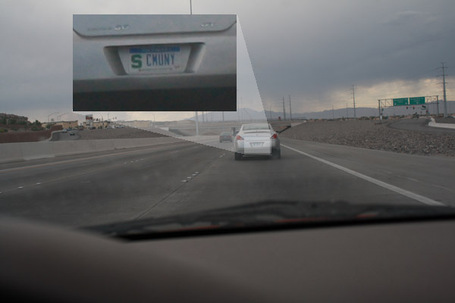 Yes, that's really what it said

From there, it was relatively smooth sailing until taking the exit for UNLV(by way of the airport). Thinking that parking was inevitably going to cost me money, I desperately searched for an ATM to get cash. I found one, then spent 15 minutes driving through the UNLV campus before finally finding the Thomas & Mack Center again, where I found the parking was actually free. After picking up my tickets from will call, I made my way inside the Cox Pavilion, where the Bulls and Knicks were in the 4th quarter of a pretty close game. I saw the last two minutes, but little did I know that would be the closest and most interesting game played at Cox all day long. The Bulls won by 6, and DeMarcus Nelson looked pretty damn good in those waning minutes of the game.

Once that game was over, I met ATS, and he and Mike Lisboa from Bright Side of the Sun actually sat up in the stands and watched the next game with me. I felt sorry for Mike, and a friend of mine(Who is probably the only Suns fan in San Antonio), whom I was texting updates on the game to. Why did I feel sorry for them? Because the Suns didn't deserve that beatdown. They were playing the Grizz, FFS. 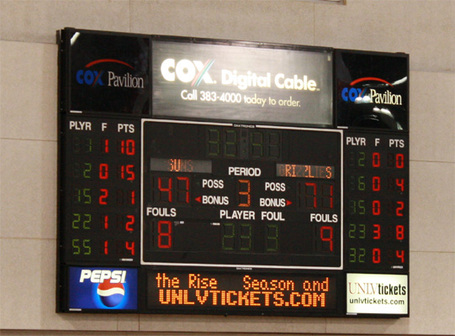 It got worse for Phoenix, much worse.

When you're a rebuilding team, getting punked by 37 in a Summer League game doesn't inspire a ton of confidence. I'd feel sorry for Steve Kerr, but he's actually responsible for that mess. Mike put it best when he said that the Suns for the last 2 seasons "don't know what kind of team they want", and it's good to get an opinion from a more attentive Suns fan than the ones I'm used to dealing with at work. I've always thought BSotS was a better environment for Suns fans than even the local "professional" media, and Mike definitely did not prove me wrong. Wow, I thought I would feel dirty for praising Suns fans, but looks like it's OK as long as they know what they're talking about. Mike and Wayne[ATS] both chimed in on NotBlake Taylor Griffin, who they saw as a sort of Dan Majerle 0.5 - after listening to these assessments, then observing the game, there may not be a better comparison to make. 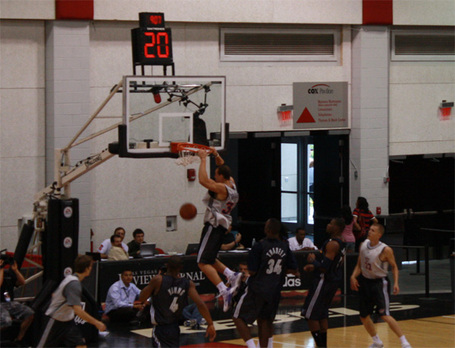 Anyhow, after that game got out of the way, it seemed impossible that the Spurs' game could be anything but competitive. Well, it seems that making assumptions was not the best thing to do. The Spurs came out of the gate and fell flat on their faces.

On the upside of things, we were sitting near a lot of the brass for both teams. Nate McMillan, Kevin Pritchard, Pop, Dennis Lindsay, and others(Monty Williams FTW!) were all within 20 feet of us at one point. I didn't want to bother Pop while ATS had PtR pulled up on his laptop screen(plus Pop was talking to some guy for about 10 minutes), so I thought I'd be sneaky when he walked up the stairs. With the camera on my knee, I turned it towards Pop without looking that way and snapped. But CIA Pop is observant, and was looking right into the lens when it was snapped. 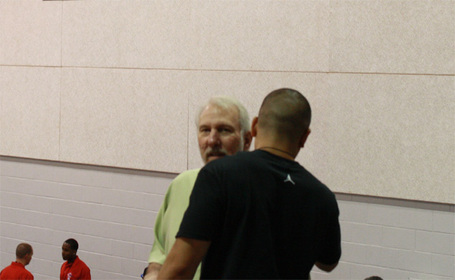 Get that camera off my lawn, you damned kids

Some Actual Basketball Notes from Spurs-Blazers: 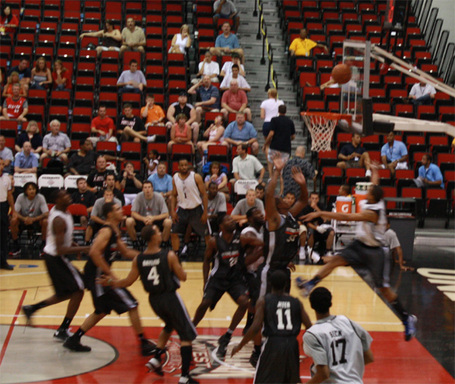 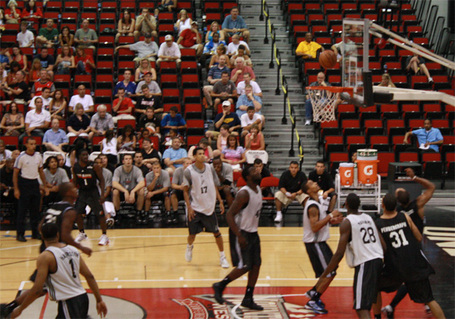 So our game didn't go much better than the Suns' did. But I felt it was worth the trip, simply for the experience of being so close. Jack McClinton(he really is only 6'1") and Marcus Williams were both on the fan side of the media rope after the game, and DeJuan Blair came back over from his on-camera interview and signed autographs for everyone that wanted them.

After the road trip and 5 hours of sitting in a rather uncomfortable chair, I was exhausted. ATS and I headed over to In-N-Out, where we were attacked by an overenthusiastic fan who let us know in no uncertain terms how great he though DeJuan was to be signing all of those autographs. Why oh why did I wear by Spurs warmup jersey? Also, there was a guy in an Opeth shirt(Kaizer?) staring and muttering to himself in the corner, which was entertaining.

But, I had to be back in PHX for something sunday morning(plus I'm too cheap to rent a room), so after In-N-Out we parted ways. I kept seeing lightning ahead of me on the way back to Phoenix(which took a whole hour less because of the lack of traffic on that road between 10PM and 3AM), and eventually discovered that it had rained at home. This disappointed me, since rain doesn't happen nearly enough in Phoenix. But on Sunday night, it happened again, in spectacular fashion. Storms were popping up everywhere, and I headed out to try to get a shot of lightning from some of those developing thunderstorms. What happened after I set up was a rather frightening surprise, that later became a happy surprise when I saw the final result of the only shot I got in before running back inside, scared. It made the whole weekend a little bit better, especially after a second Spurs loss. Enjoy. 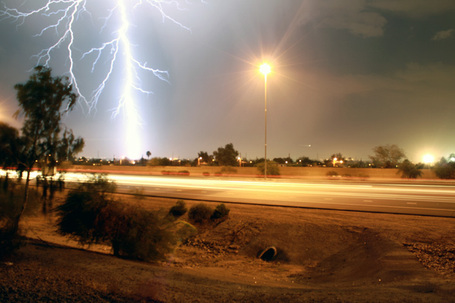 All in all, I really enjoyed the Summer League experience, and wouldn't hesitate to do it again, as long as there's better planning next time. The next 3 months until preseason starts are going to be hell, but at least we can all share that hell with each other. Right?