48 Minutes of Hell: Summer League Notes: SA vs. OKC
Tim Varner writes: "Don’t look now, but the San Antonio Spurs have an embarrassment of young talent. George Hill and DeJuan Blair are easily rotation players in the NBA. Last week I might have softened that statement, but there is no need for that kind of downplay this morning. If the Spurs needed to upgrade their role players, they’ve done it."

SpursTalk.com: Summer League Game 3 - Game Thoughts
timvp writes his analysis of the players' performance in our third game of the Summer League. Check it out.

Hoopsworld: Vegas: Mahinmi's Proving Ground
"San Antonio big man Ian Mahinmi has been slowed by injury the last two years. Is this his breakout season?" We can only hope so.

SpursReport.com: QUIZ: Are you a Manusexual? Perhaps Ginobili-curious?
This is old, and I found it through SpursTalk, but in case you missed it at the time...

MySA: Summer League notes, Take 3
McDonald's take on our players' performance after Game 3 of the Summer League. It has its moments.

NBA.com: Southwest Division breakdown: Spurs come back to life
"How many times does the world have to throw shovels full of dirt on top of the San Antonio Spurs before everyone understands that they have more lives than Jason and Freddy Krueger in one of the horror flicks?" At least one more time, it seems.

Spurs.com: Summer Notebook: Ian Mahinmi - July 18, 2009
"Spurs center Ian Mahinmi checks in with how things are going during the Vegas Summer League." Poor guy is still thinking about that triple-double. 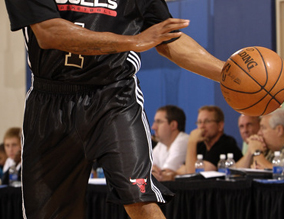 Summer League And Nothing But

Blazersedge: Summer League Game 4 Recap: Blazers 91 Spurs 74
In case you want to revisit this game from the Blazers' perspective. For some reason.

Bright Side Of The Sun: Summer Suns Get Out-Everythinged by Grizzlies
"Game re-cap of the Phoenix Suns' blowout Summer League loss to the Memphis Grizzlies." And he even quotes ATS.

The Dream Shake: Summer League Recap: Budinger, Dorsey shine in Vegas
It was a successful Summer League for the Rockets: they finished undefeated with a 5-0 record. Tom Martin grades each player's performance.

HoopsHype: Thabeet dud of the week?
Good thing the Spurs pulled DeJuan, because otherwise they could've ruined him forever.

NewsOK.com: Time to assess the OKC Thunder's young guns
"After 10 games in two cities and three gyms, certain things have become quite obvious about the strengths and weaknesses of the Thunder’s young guns." How much young talent can one team have? Presti is so smooth.

Bright Side Of The Sun: The unofficially official Phoenix Suns comic strip
"Looking for somebody to blame for the Phoenix Suns problems? Look beyond Steve Kerr to his Chief Adviser." This is great. Go read it!

SLC Dunk: This is your team
The Jazz fans coming to terms with their new team. I hope Deron dunks on Boozer too.

Third Quarter Collapse: Orlando Magic Bide Their Time While Other Eastern Teams Make Moves
"With no official word on the Orlando Magic's pursuit of free-agent point guard C.J. Watson, 3QC surveys some recent, lower-tier free-agency developments with some of the Eastern Conference's other clubs."

Silver Screen and Roll: The Odom Negotiations: No Need to Panic
"Thoughts on the Lakers' reportedly withdrawing their contract offer to free agent Lamar Odom." This makes a whole lot of sense, and I think Odom will end up signing with the Lakers after all this soap opera. And yet, I can't help but point out that when people say "no need to panic", things are definitely Not Okay (tm).

Clips Nation: We Haven't Forgotten About Al Thornton
"He may not be a 'glue guy' but Thornton can still play." And he's not Iverson.

Rufus on Fire: "Second Round" by Dustin Stevenson
Another entry on the Rufus on Fire Basketball Fiction Contest. Not as good as "Goat", but a nice little tale.

Rufus on Fire: "The Darkness and Malcone" by Kevin Miller
Are you reading these? You should be.

Rufus on Fire: "Shooting Threes and Eating Candy" by Victor McConnell
The winner of the basketball fiction contest. Check it out.

The Dream Shake: Adrian Wojnarowski is trying to write Yao's tombstone a bit prematurely
"Please, I beg the sports media world to stop writing off Yao Ming as if he's retired or dead. The dude will be back. And quite possibly stronger than ever." I love the optimism.

Basketbawful: Living Large
I imagine you all know about this one, but just in case... you are reading Matt "Bawful" McHale's tale of his college freshman year, right? If you aren't, shoot yourself in the right foot with a crossbow and get right to it. It's absolutely honest storytelling.

ESPN: Yao Ming opts for major surgery on fractured foot with hopes on return
"Rockets center Yao Ming has elected to have extensive surgery on his fractured left foot that almost certainly eliminates his chances of playing next season." This sucks. Hard. Get better, Mr. Yao.

PBN: Reach for amnesty?
"It's possible the NBA could end up bringing back the amnesty rule that resulted in teams saving millions of dollars in luxury tax during the summer of 2005." Would that help us? Don't look at me...

Leroy Smith - The Man Who Motivated Michael Jordan
This is madness. Go.

MSN: The most at-risk sports teams
As CapHill said, this puts Holt's decisions during this offseason into perspective.

Celtics Town: Bill Walton's Hatred For Rasheed Wallace
Did we dodge a bullet? We'll find out during the season - but Walton's words are food for thought.

RedsArmy.com: Is Your Attitude Controllable Enough to Win a Championship?
"Do you think you can control your temper long enough, for eight months, to get that championship?" Good question.

Music box
I'm not sure how to describe it, but it's worth listening to.

They're Running Out Of Titles For Garfield Books
Poor fat, fat cat.

Pringles ad nauseum
I'm so happy at my pun.

E-mails from... an unpleasant fellow
At least he's honest about it.

Yes, it's a Pokemon joke
Don't judge me.

The Onion - But If We Started Dating It Would Ruin Our Friendship Where I Ask You To Do Things And You Do Them
Haven't we had this conversation in PTR before?

Hidden passageway
I want one for my castle.

Man Enough
Sometimes all you need is a mustache.

Dinosaurs
Nicer than you thought.

Summer League: Nuggets vs Spurs Highlights
Seems to long ago, doesn't it?

Summer League: Thunder vs Spurs Highlights
In case you missed the game.

Summer League: Blazers vs Spurs Highlights
Skip this one at will.

So All Access: Helen's Missing Eyelash
I love these girls.

Pic of the Week 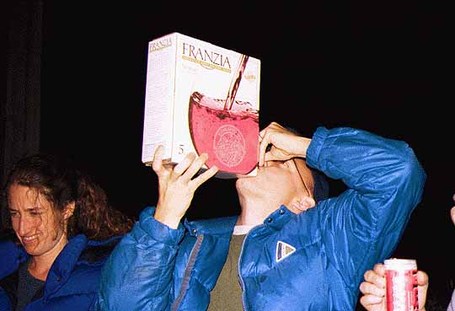 Dedicated to our very own tomasito