Too Early? It's Never Too Early To Speculate

Share All sharing options for: Too Early? It's Never Too Early To Speculate

It's time for a little premature speculation on the Spurs roster and depth for the upcoming season. No, Summer League isn't finished, but the results of that so far haven't been very surprising. Come on in, the water's fine, and it's just been cleaned up in anticipation of a river parade.

I'll start by saying that I believe the Spurs will fill 13 or 14 roster spots by the end of training camp, leaving the final one or two open in case another Toros player starts tearing up the D-League. Currently, there are 13 players who (IMHO) are good enough to make the team, and here's how this fan sees the roster shaping up at the beginning of the season:

If Hairston's newfound jumper and confidence on the offensive end are consistent, he and Finley may be switched by season's end. He looks that good.

Marcus Williams is sort of the wild card in this. I haven't seen nearly enough(read: any) of him to know anything about his game, so why is he listed at PG above? Because RC Buford, in an interview during the first game of summer league, sounded more enthused about Williams than he did about Hairston, Haislip, or even Blair. It seems like the Spurs saw enough from his stint with the Toros last season to try the experiment of Williams at PG(Hell, could it really be worse than using Mason at the point?), but I get the feeling he'll be starting the season back in Austin.

The Toros may also be useful for developing Jack McClinton and/or James Gist.(who can probably get much more money in Europe, so by no means is this assured. More speculation on him further down) which is where that final roster psot comes in handy.

Bonner may be in Mahinmi's place on this list, but it seems more likely that the Spurs want to give Ian some more burn this year. I'm not sure they plan on keeping both Mahinmi and [the rights to] Splitter, since the frontcourt is getting awfully crowded.

Speaking of the frontcourt being crowded, what the hell happens to Gist at this point? Where could he possibly fit? It seems as if he has almost zero chance to be on the team - not just this season, but for several seasons to come. Unless he shows enough speed/skill to play SF, Gist just doesn't seem to have a roster spot in his future(and even if he does switch to SF, it's highly questionable). 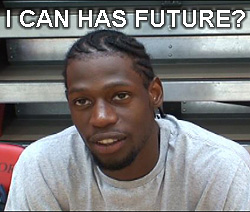 Are the Spurs done yet?

There's still a part of me that believes another trade is coming - one that solves the problem of having too many talented players/prospects, and not enough roster spots. The Spurs FO is pretty crafty, as Tim Varner explains here - it seems that McDyess wasn't given the full MLE, but the Spurs took a bit of it out and gave it to DeJuan Blair. It also seems(from the comments on that story) that Blair may have been given a four year contract rather than the 3 years that were originally reported.

Peter Holt is "ready to kick some ass", and can't be blamed for his enthusiasm. But it sounds as if the Spurs may not be finished with this most interesting of all offseasons. Full speed ahead, folks - this has only just begun to get interesting.