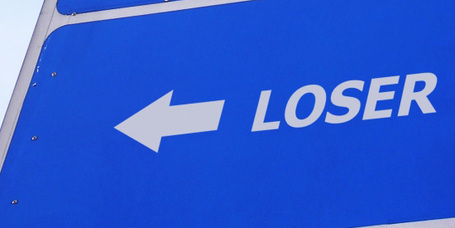 You know where you belong.

So, here we are again. Losers, but not like the losers on some other sites. We're high class losers. And we're here to talk about the Finals. It didn't go out so well for the Magic in game 1 - so a lot of people are hoping for a closer, more competitive game. Of course, this wouldn't be a Spurs blog if we didn't have a deep-seated hatred for the Lakers. Would it?

The first game of this series was interesting for much longer than it should have been - about 15 minutes. Jameer Nelson even played, and had me fooled for the first couple minutes of the second quarter. But then, the trainwreck commenced. Over at ESPN(the greatest network), they're talking about LA's great defensive play, but I don't buy it. I don't care how good your defense is, there's no way you hold a team to under 30% shooting without luck on your side... or something else. Sure, the Lakers do play very good stretches on the defensive end, but it seemed like Orlando got "stage fright" or "Finals jitters" or Mattbonneritis after starting the game out so well in the first quarter. They actually shot better from three(34.8%) than they did from inside the arc(29.9%). I'll be honest - I didn't watch the whole game. But I'd imagine this wasn't the only easy shot that was missed: 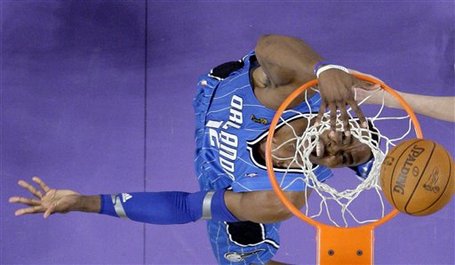 FYI, Dwight - You might wanna keep your eyes open when going up for a dunk. Makes it look more like you were trying to make it.

So, tonight we find out if Orlando has the mettle to be a championship team. This should be a better game, if for no other reason than the Magic don't want to be embarrassed like that again. On the other hand, I don't think it will be.

The Lakers will dominate this game from the tip, and win handily in one of the greatest Finals performances ever seen. They're that great of a team. We're talking greatest of all time great. That game the other night was like a practice scrimmage for them. And the reason Orlando shot so poorly was because they realized how inferior they are, and simply decided to throw the game to get the Finals over with as soon as possible.

Wilt has nothing on Bynum.
Bill Russell? - Gasol would blow him right out of the building.
Kobe could have doubled the production of MJ in his prime.
Ariza > Bird - why else would most PtR members want the Spurs to sign him?
Derek Fisher would give Pistol Pete nightmares, and today gives them to CP3.

Now, there are some people here who would say that my judgement is clouded because my significant other is from LA, and therefore likes the Lakers. Well, I'm here to tell you that it's all true. I tried for a while, but my loyalties are so weak that I couldn't resist ditching the team I've been rooting for since I was old enough to know what basketball was.

But it doesn't stop there. From this point on, I will love living in Phoenix - the hotter it is, and the more rattlesnakes and scorpions, the better! Also, Suns fans don't whine - the conspiracy theories about Stern wanting the Spurs in the Finals are all true, because the Spurs get such good TV ratings for the league. How else do you explain the questionable calls that always go the Spurs' way, especially that one in game 4 of the 2008 WCF? It's because Joey Crawford(among others) is David Stern's way of vicariously helping the Spurs get ahead of those big-market teams he hates so much.

Henceforth, I will be a fan of the Oklahoma Sooners and Carolina Panthers. Why? As I said, I'm abandoning all the loyalties and "intelligence" I grew up with, because it was obviously all sadly misplaced. That, and because my cousin graduated from MIT, but tells me that OU is a much better place now that she's doing her post-grad work there. After all, I was in this guy's class when I was in college, so I'm an idiot. Well, I shall be an idiot no more - it's time for me to make something more of myself.

I'm also volunteering my services to the federal government as a policy advisor, because having lived in 3 states bordering Mexico and another one that shares a narrow maritime border with those evil commies in Cuba, I am a foreign policy expert of the highest level. I mean, I once saw Cuba with my own eyes from a boat - I know exactly what they're up to down there.

But all of that other stuff isn't important. Just know that the Lakers will win this game, because they are the greatest team ever, and the Magic suck. Kobe deserves to have as many rings as Duncan, you just don't want to admit it. Phil Jackson deserves to have more rings than Red Auerbach - if you think about it, you will all agree that he is a better coach, anyway. Those 8 consecutive titles that Auerbach's teams won are like Phil's warmup run.

So stop it with the "Anyone but the Lakers" stuff - you all secretly love them as much as I do. And that's why you're here - to watch the greatest team of all time trounce a team that is undeserving of their attention.