Share All sharing options for: The Toros Draft Party

Two interesting things happened on Thursday besides the NBA Draft. I went to the Austin Toros draft party and I got my press credentials to cover the NBA Summer League in Vegas.

The Toros draft party was at a bar called Cuatro's just west of the UT campus. Parking was very limited. During my quixotic quest to park without being towed, I saw several of the Capital City Dancers strutting (can you do anything but strut in 3" heels?) into the bar. I finally found a spot, told a Toros guy where to also find a spot, and entered the bar and ordered a beer. A radio show was being broadcast from the bar. I don't know what show but I remember a sign saying "The Zone". I can't tell you which show though because the sound was so bad. After a couple minutes, I realized THIS wasn't the draft party. There were no Capital City Dancers and none of the televisions were showing pre-draft commentary.

So, me and the beer started to wander.

Now, I found the party. It was in the OTHER part of the building. Here, there were cheerleaders. And other members of the Toros staff. I chatted up a couple guys, or maybe I got chatted up, filled out a name tag replete with "PoundingTheRock.com", and grabbed another beer. I passed on the free fried pickles.

It was an interesting crowd, but heavily dominated by two groups. One, Toros sales people or as their cards say Account Executives. Two, some people from the Erwin Center (the UT basketball arena). I'm not sure why they were at the part since the Toros don't play in the Erwin Center. I talked to two people who are corporate sponsors of the Toros. I got the lowdown on cost of sponsorship, perks of sponsorship, and how they keep track of data to make sure it is worth their money on the business front. I ran into a woman that I sat next to on a plane coming back from a conference we both attended in Phoenix in 2003. I talked to a couple other guys who were like a version of Stanley Tucci and Oliver Platt from The Impostors. They somewhat matched Tucci and Platt phsyically and were very funny in the way they played off each other. I could have spent hours talking to them.

Then I met Eric Dawson. He's a two-year Toro veteran from Midwestern here in Texas. This past year he averaged 10.4 points and 6.6 boards in just over 24 minutes a game. He only played in 31 of the Toros 50 games. He missed ALL of the previous year with a detached (or maybe torn) bicep just above the elbow. He had been elbowed during a game. Ick! He says he's all healed up and feeling good. While, obviously, making the Spurs is his ultimate goal, he's considering teams in Korea, Japan, and Spain. But, the big news I got out of him is that he is going to be on the Spurs Summer League team. I said, "Hey, I just got my press credentials to cover the Summer League today." He said, "Cool, do you have a business card?" I said, "Um, well, um, uh, no. But I'll write my info down." I hate when I'm unprepared like that.

A little later, I met Eric's representative who made the unfortunate mistake of talking to me about software on the phone, and I went on an epic ramble about the possibilities and future of computing. Em-barr-assing. Embarrassing. Anyway, Joc was a nice sport about it and feigned interest.

There was an appearance by Da Bull: 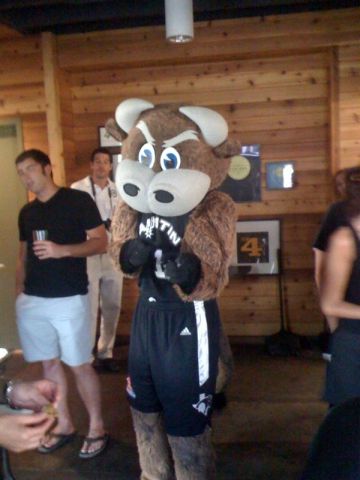 DaBull is a top-notch mascot. Mrs. ATS loves him. I think he has been the D-League Mascot of the Year three years running.

I ran into one guy who knew was familiar with Pounding The Rock, and he was also the only person who had heard of SBNation. My man was rocking a The Donna's concert shirt. I liked him instantly. The rest of the night I worked on my pitch for what PoundingTheRock is, what a Spurs blog is like, and what SBNation is. Painful.

Oh, and there was a draft going on. The crowd didn't really seem to be into the draft much. I guess a third of the people were there for work, maybe even half, and the rest were there to schmooze. Like me. The draft party officially ended BEFORE the Spurs ever made a pick. I think I was one of 5 people left when we took Blair. Then I headed home.