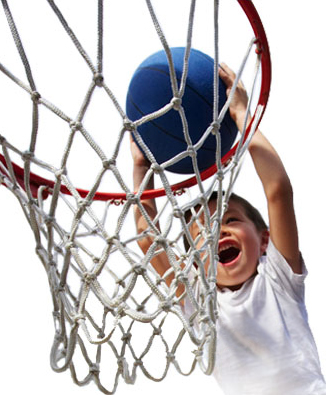 Let's stash him in Europe for 15 years as he develops

...That's great, because I'm not so much. The good regular season records from the Spurs through the last decade and the proclivity of the front office to trade away our first round picks mean that I'm usually not able to muster enough interest in the proceeding to sit through the hours of insipid ceremony. Draft night is not Spurs night.

However, our fearless leader will be going to the Austin Toros draft party (and I'm sure he'll look away whenever a Capital City Dancer walks past him), so it became my duty to write a post about this momentous occasion. Considering I haven't followed the mock drafts and don't watch much NCAA basketball, the more knowledgeable PTR regulars might notice I'm talking out of my derrière. I apologize for that, and welcome anyone that has some accurate information to write a fanpost that I'll afterwards cannibalize to update this one.

The Spurs Play In The Second Round

How unlike the playoffs. Zing!

The Spurs have 3 second round picks: numbers 37, 51 and 53. With Jefferson in black and white, I would imagine that the FO will do their best to plug our holes in the frontcourt, despite having two young bigs already signed (Tiago and Yawn). A serviceable rookie center or power forward would be perfect for us, but Draft Express says that the group of centers available leaves a lot to be desired. Check their post on the subject to see more stats you can shake a Hollinger at. (And here's their take on the power forwards crop.)

As ATS explains here, a possibility open to the Spurs is moving up into the low 20s, or use his trade assets (all Romaju of them) to move even higher. The truth is, the fact that the owner is willing to pay the luxury tax has ruined every pundit's predictions. Moving into the first round would mean that the Spurs would be even further beyond the cap, but I'm starting to think our beloved leaders our going for broke this year.

Okay, I'm sort of excited after all.

Let's get to know the top 5 picks, according to Draft Express. 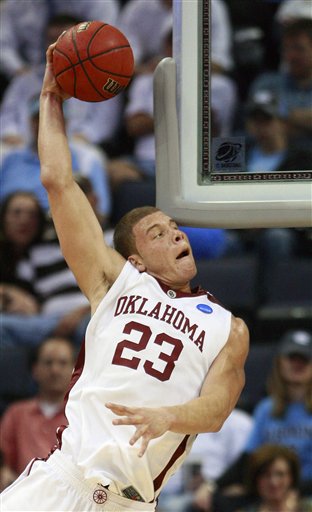 I started paying attention to this big lug during March Madness, when someone went all Karate Kid on him and flipped him over his shoulder for one of the most spectacular fouls I've seen. Here's the .gif image, or you can go watch it over at YouTube. A few days later he did what you see above - he elevated for a slamma-jamma, hit his head on the side of the backboard and still made the dunk. No, really.

DE's take on the manbeast:

Blake Griffin’s spot at the top of draft is more than justified by breaking down his advanced statistics, as it truly emphasizes just how impressive a prospect he is from a physical standpoint.

Not only did Griffin garner the most possessions of any PF in the draft at finishing around the basket per game (7.9), but he's also the #1 finisher as well, connecting on an outrageous 75.5% of his short range attempts, not including post ups. While his overall points per possession (PPP) of 1.08 ranks fourth, thanks to the fact that he’s fouled on 18.5% of his possessions, has finished 51 of his 61 attempts in transition, and ranks amongst the best finishers when cutting to the rim at 1.52 PPP. Athleticism, strength, and tenacity aside, those numbers alone go a long way towards explaining why he’s such a coveted prospect considering he’s managed to generate 20.2 total possessions per game (good for 3rd on our list) while still getting the job done in the post (53% on 7.9 Pos/G).

Too many stats... Whatever. Anyone able to do things like this is okay in my book. Then again, I'm biased. 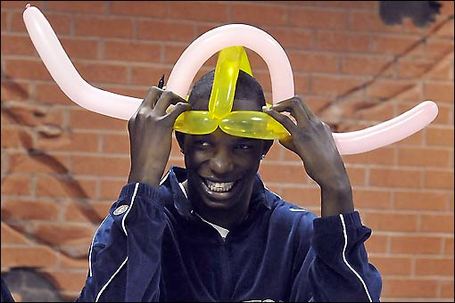 Who is this guy? Don't look at me, I have no idea. Apparently he plays basketball and loves balloon hats.

DE to the rescue:

Hasheem Thabeet’s value comes from his defensive ability, but the development of his offensive game will be integral to his success in the long-term and determine how he is viewed as a player.

Thabeet is going to block shots next year, pull down some rebounds, and face an uphill battle to become a bigger offensive threat than he already is.

Its more than a bit concerning that Thabeet was already having trouble making his presence felt on the offensive end on the NCAA, however efficient he may have been. He was after all, essentially a giant in a land of midgets. He won’t have anywhere near as big a physical advantage in the NBA as he did in college, which will make things even more difficult on him moving forward.

Thabeet struggles badly trying to create opportunities for himself, being incredibly reliant on the talent and generosity of his teammates to generate offense for him. When he was able to get the ball in scoring position, though, he was a major force. Thabeet scored a point on 62.7% of his half court offensive touches, ranking him first amongst all players we looked at. The problem is that he received such few touches, his 11.8 possessions would place him 25th amongst the power forwards we previously examined.

You can watch him answering questions during the Draft Combine here. He has a bit of Mutombo in his voice. Watch him block shots, rebound, hustle, make dunks, oop some alleys and jump really high in this video. Considering we don't need another scorer, we could really use some of that, eh? 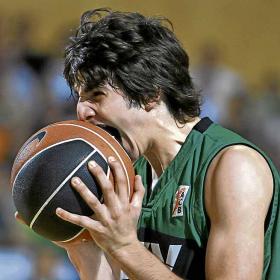 Ricky, at 18 years old, is the youngest of the 5, and probably (hack!) the youngest in the entire draft. I've seen him play for the Spanish national team for a few years now, and I must say he's everything people say he is (even what this guy says rings true). He has played in high pressure situations since he was 15 years old, and he's a gifted passer. If he can develop a deadly jumper and learns to finish at the rim like Tony, he could be the next Steve Nash. (Big ifs, eh?)

Ricky Rubio doesn’t have overwhelming stats, but he’s the youngest prospect on our list playing against by far the strongest competition, and thus isn’t as weak in some areas as people may imagine.

Always better known for his creativity and playmaking ability, it doesn’t come as a shock that Rubio looks good in transition. He is shooting 69% on his transition opportunities on just 13 attempts this season –which is a bit misleading since he doesn’t take many attempts more because he knows when to give the ball up than because he isn’t pushing the tempo. In contrast, his limited isolation possessions are indicative of some issues, as he’s not going to produce a ton in pure one-on-one situations. Fortunately, Rubio, like most European point guard’s we’ve evaluated, is effective on the pick and roll. With 27% of his touches coming from the two-man game, Rubio could have a mutually beneficial relationship with the post players he is teamed with in the NBA, since they’ll likely make his life just as easy as he’ll make theirs.

I'm going to enjoy watching this guy play basketball in the NBA (wrap around galore!). Especially if he doesn't become a punk female dog like Paul. 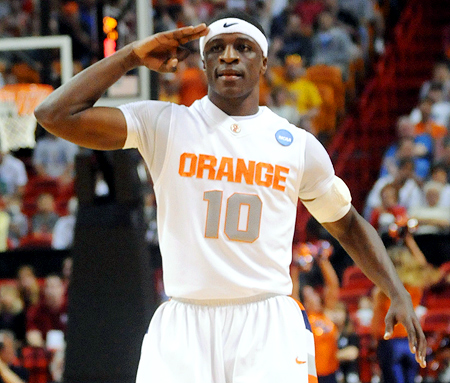 He can (and will) kick your butt

Another unknown for me, even though I watched him play during March Madness a couple of times. First thing that strikes me about this kid: he looks strong. Seriously strong, lamentations-of-your-women, green-skin strong. I had saved this dunk on poor Mike Rosario for my blog, but it's perfect to illustrate my point: that's something else. (Here's a mix of his best plays for your enjoyment.) He's short, but I think he has it in him to become an effective NBA player.

Jonny Flynn was fast enough to compensate for his size on the NCAA level.

Flynn was a standout in two areas: his ability to get to the rim, and his one-on-one skills. Thankfully for him, those are two skills that the NBA values dearly. Clearly, his productivity is grounded in his first step. Flynn got to the rim 8.8 times per game, which accounted for a lot of his scoring, but his 1.24 PPP in unguarded catch and shoot situations and .94 PPP on pull up jumpers are both very respectable. His 4.3 possessions per game on isolations are amongst the best amongst big-conference players, and his 41% shooting on those plays isn’t awful. Couple those tools with his capacity to drive in both directions and his ability to draw fouls (16.1% SF), and it becomes hard not to think that Flynn could be, at the very least, a high quality backup if he improves his efficiency, especially once he masters the pick and roll (.84 PPP).

That's no-h Jonny for you, guys. Watch him in a Draft Combine interview here, and during workouts last month. Let's move on. 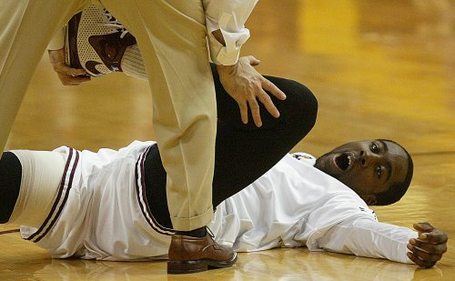 Should fit right in

James Harden. James... Harden. Just a second... ...aah, here we go. YouTube Mix of James Harden. It's pretty helpful, considering it's titled "Get to know James Harden". Judging from the level of skill shown in this video, he might be the next Kobe. Or the next next Jordan.

DE with the save:

James Harden’s situational statistics should ease many of the concerns teams have about his game. It appears that he's one of those players who "finds a way to get by" despite his shortcomings.

Very efficient, while maintaining fairly high usage rates, Harden made 47% of his shots in logged possessions –an excellent percentage for a two. [...] A lot of Harden’s efficiency comes from an area that most probably wouldn’t expect it to. In spite of his perceived athletic limitations, Harden was a terrific finisher around the basket this season.

Harden's biggest shortcoming ended up being in the perimeter shooting department. He was terrific on the very few catch and shoot opportunities he received with his feet set (2.4 Pos/G), but really struggled when being contested (.85 PPP) or shooting off the dribble (.73 PPP).[...] Fortunately for Harden, this is clearly a part of his game he can work on, but he'll have to put in the appropriate time in the gym. [...] Harden's intelligence and excellent skill-level really shine through in his ability to score in transition--which was an important part of his game in college.

Just Another Role Player, I guess. Considering he's the 5th pick, well, that should tell you something about the overall quality of this draft. That's why I was so mad that some people suggested trading Manu freaking Ginobili for a 5th pick. Really? Manu for James Harden? Shooting guard for shooting guard? You can see him all dressed up in this Draft Combine interview.

Oh, and I almost used this photo for James. I think it took me 5 minutes to decide, they were both so good.

Pay attention, because if we trade up, the future Spur will be among these guys.

Here's a list of all the players eligible for this draft.

Yes, I will go all the way to the Spurs' 37th pick. That's how professional PTR bloggers are. And for the record, I typed this team by team. (Efficiency fail.)

You mean this exhaustive post wasn't enough? Ah well, check these out, then:

Remember, guys: it's draft day. And draft day has been good to us in the past. 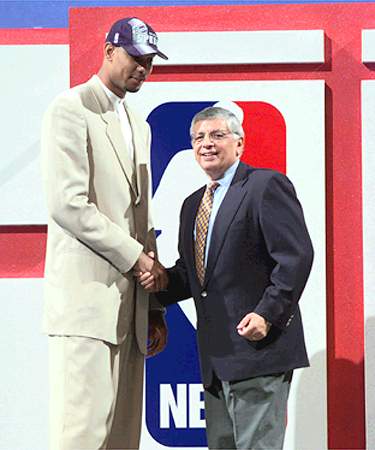 Once in a lifetime?