I hate to be a Negative Nancy but...

Share All sharing options for: I hate to be a Negative Nancy but...

Yeah, I'm officially concerned about the Jefferson trade, for quite a few reasons. 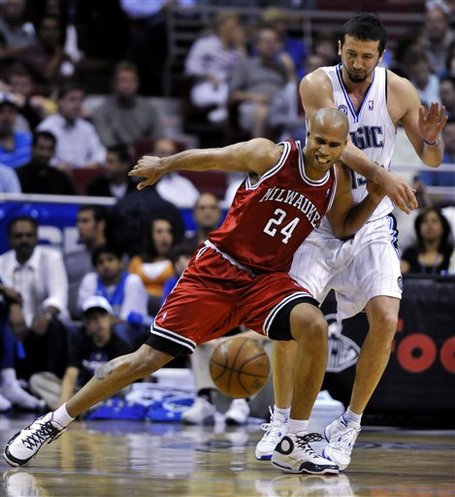 Guess which of these two gentlemen I'd rather have?

My initial reaction to the trade? A tiny flicker of excitement, before my brain kicked in, and the more I learn, the more I think, the less I like it. I know I'm in the minority here, but as a stand alone move I don't like this. I don't like this one bit.

First of all, I've never been much impressed by Jefferson as a player. I never thought of him as a difference maker in any way. If anything, he was the epitome of the kind of guy that made me appreciate being a Spurs fan, the kind of overrated, grossly overpaid, score 18-give up 22 player that our organization has smartly avoided like the herp for the better part of a decade.

Yes, Jefferson shot 40% from downtown last season. Yes, he's 6-7 and a legitimate small forward. And yes, he's likely to throw down a dunk or two per game. Those things are all well and good.

But let's look closer. He's not that young, he's 29. He finished a -104 last season, the second worst figure on the team. The team's defense and offense, was better with him OFF the floor, according to 82games.com. The guy is a shitty, unwilling passer, our offense has always emphasized making the extra pass and last year Jefferson averaged one assist for every 15 minutes of floor time.

Should I go on?

Okay, how about this. His PER last year was 15.45, barely abover average and the second lowest mark of his career, in what was supposed to be his prime. Also, for a guy with his athleticism, he came up with only 66 steals and 14 blocks in nearly 3,000 minutes on the floor. Not exactly an active defender. Also, the guy had 20 double-doubles in the '05-06 season. He's had five since.

Basically we're getting a player on the decline, he's getting paid a ridiculous salary, he's on the books for three years, he's not a Spurs type of player, and he's going to have to learn a whole new offensive and defensive system, where traditionally players have struggled here in their first seasons.

Now let's look at how this move impacts the rest of the team.

Obviously my first concern is how this effects Manu. What this acquisition tells me is that Pop and the rest of the FO have no confidence whatsoever that he's going to have a good season next year, and that even if he does, they're still not planning on re-signing him. Suppose Manu does surprise everyone and has another 6MOY-worthy season next year, and the team offers him a 3-year, 30M contract. That would mean 59 MILLION SMACKERS (22.2 for Tim, 12.6 for Tony, 14.2 for RJ, 10.0 for Manu) committed to four players in '10-11. That would mean 57.4 MILLION SMACKERS to four guys in '11-12 (18.7 for Tim, 15.2 for RJ,13.5 for Tony, 10.0 for Manu).

Does that sound realistic to you? Me 'neither.

It looks like a one year window, at best, for the Spurs to contend with Manu and Jefferson. After that, it appears that they've made their decision and will move on with Jefferson as their third wheel.

And that's IF they give Manu the whole year. Remember, he's an expiring contract too, just like Bruce, Kurt and Fab were. His contract has major value for a team looking to add a star for a postseason run at the trade deadline and then have that salary cap room to play with the next summer. I think the odds of Manu being traded this seaon went up like 500%, and it wouldn't shock me at all to see him moved even in the draft, if they want to get into the top five or so. The Washington deal makes way more sense now, with the Spurs getting bigs like Andray Blatche and Etan Thomas/Brendan Haywood and the fifth pick (for James Harden, a lefty shooting guard out of Arizona State who models his game after Manu) for Manu.

Basically, I'm going to be a nervous wreck on Thursday night now, at least until the first ten or so picks are off the board, and I'm already mentally preparing for the worst. My Ginobili jersey will, in all likelihood, be a throwback after this season. Jefferson's monster salary makes it a near certainty.

Even if Manu isn't traded at all this year, I can see what the team is thinking. It's his contract year, let's get one last monster season out of him when he's super motivated to prove everyone wrong, and then let him go anyway, since he's never gonna do it again.

Finally, we have to consider the lack of bigs on the roster. Right now we have Tim, puddin' Bonner, and Ian. Mahinmi hasn't played a meaningful minute in his career and is as fragile as an egg. Surely Pop can't be betting the farm on him. And we saw last year that Bonner has too many faults to be counted on. Maybe James Gist will come aboard, but he's a bit undersized to count on for solid rebounding. The mid-level exception is our only hope, and it better be used on somebody worth a damn. Again, I'm cringing in fear about a Washington/Manu draft trade. It makes too much sense now.

I hardly recognize the Spurs anymore. They're all but completely abandoning defense and rebounding with this trade. It appears the front office was inspired by Orlando's playoff run and are thinking Orlando's offense + experience = championship. We'll see how it works out. I'm sure it won't be a problem at all for Tony and Manu that this fuckwit has the second highest salary on the team now.

It's gonna be a couple of rough nights at the Stampler household.