Maybe it sounds a little pathetic but I only managed to visit Disney Land when I graduated from college. And to think that was Disney Land Hong Kong. Anyway, being the third-worlder that I am living in the 105th most unlivable city in this glorious polluted world, I have to admit that I thoroughly enjoyed the experience, in a loser kind of way now that I think about it. I posed with and took pictures of all the Disney mascots/characters I could find, and even managed to slap Stitch's butt like it was my b*tch. Priceless and ultra-lame at the same time. 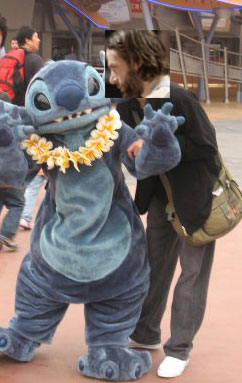 Yeah, li'l Stitch is kinda feeling that soft tap from behind.

Every time I hear of the place they call Orlando, I imagine Mickey Mouse and castles. Now, don't worry, I won't go into a litany of all the furry and friendly cartoon characters we once stupidly admired in our twisted childhood. You folks are too smart and too cool for that. So let's play a little game I'd like to call the Hidden Van Gundys.

If you're not familiar with the concept of the Hidden Mickeys, you've probably been walking half-dead for the last few decades, or maybe you're just too old to care (like someone here I know). But because I'm such a good guy, let me show you how it works: 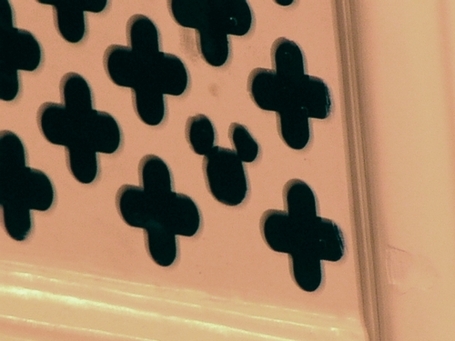 Because the Van Gundys, Jeff and Stan, have been all over the place in these playoffs and especially the Finals, I figured I'd ask a little help from the losers of PtR in finding them brothers grimey. I was watching the Game 3 replay and all I wanted to happen was for Jeff to lash out at his brother for being so dumb yet successful. Didn't happen, so I'm hoping that before the season ends, we'll get to see the two in a track meet, just like Barkley and Dick "Seabiscuit" Bavetta. Oh, and before I forget, this also serves as your recap for the first three games and game 4 preview, too. Thank the FSM and his starry appendages for photos and photochop!

One thing I find interesting in the Finals is all the added media stuff that comes into the equation. There's a lot of backstage stuff going on, and aren't we fans lucky that we get to play a little peek-a-boo in these lighter moments? No? Yeah, I thought so, too. Everytime I see backstage photos, I feel like a voyeur. The internet has scarred me for life, damn it all. 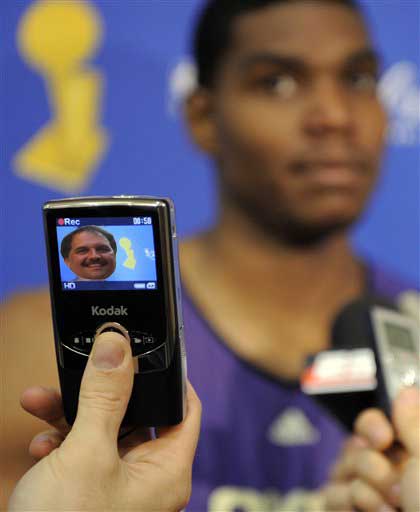 I think there is something wrong with his device. (Hidden VG spoiler alert!!! and oh, TWSS I think) 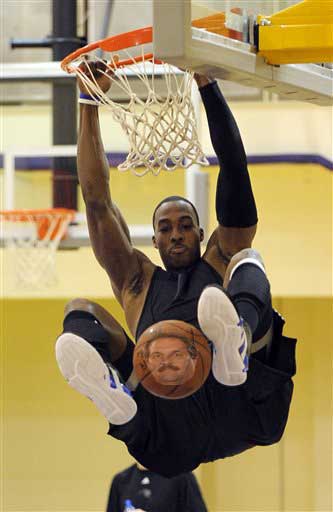 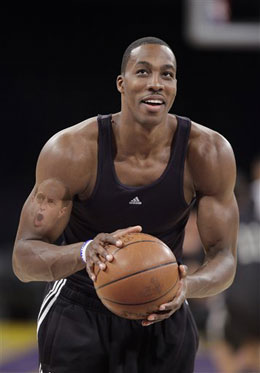 Love the new ink, Dwight. Wait... is that a person trapped in pure muscle, or is it a muscle masquerading as a person??? (Hidden VG spoiler alert 2!!!)

And of course, who don't like them bandwagon celebrities? Those d-bags who just show up when media exposure goes into overdrive and rob the rightful fans of their courtside seats? Hey, at least Jack's consistent. I think I'd actually approve of him being buried in the middle of Staples Center when the dude passes away. That's real loyalty, you celebritweeps. 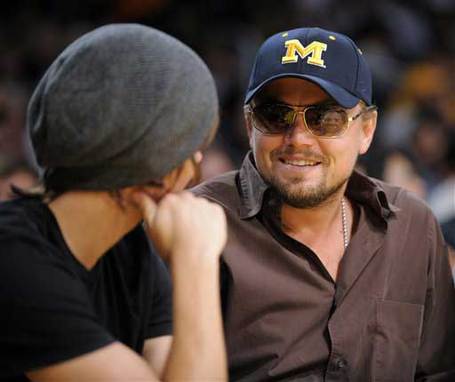 Mr. Efron getting some valuable career-ruining tips from Mr. Titanic himself. Snazzy. 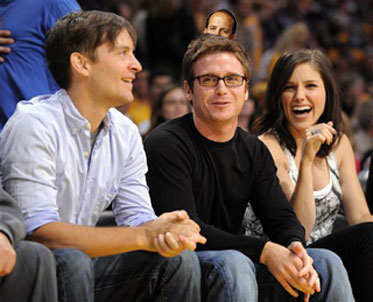 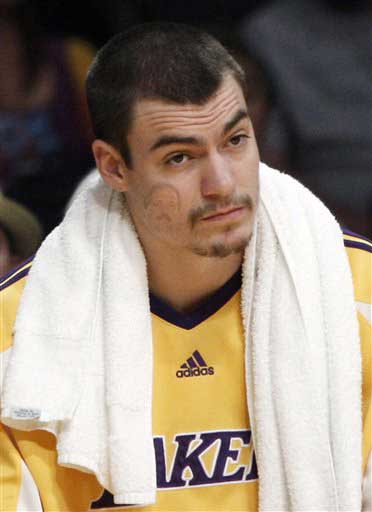 If a celebrity is defined as someone who just sits on a chair during games and still enjoys a significant amount of media coverage - good or bad - then Adam Mo' definitely makes it in my book.

The Orlando Magic's win in Game 3 at least made this series more bearable to watch, and whaddaya know, these Magicians actually have a chance. The last two games played have been close, and I expect Game 4 to be more of the same, especially if the Magic continue to keep up their blazing-hot shooting. And of course, if SVG sits down Redick's ass and doesn't play him at all. EXCEPT if Morrison plays. That's the only valid excuse. 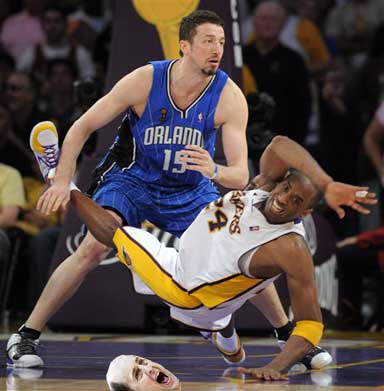 Good gawd almighty! Hedo's gonna pull off the Sharpshooter against Kobe! And Mamba's gonna tap out!!! 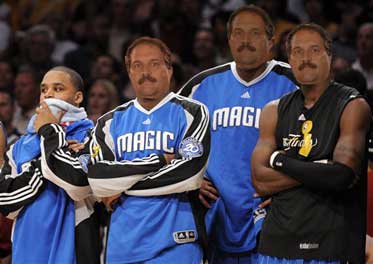 You know what's better than the Van Gundy brothers, Jameer? Yes, three Stan Van Gundys. Enough to make you run for cover with a towel draped in your mouth. 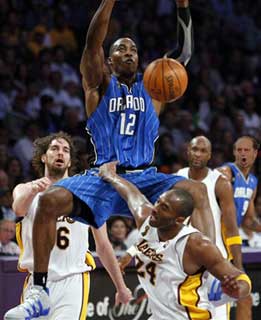 Aaand Kobe gets a free whack at someone's nuts. Woohoo, he missed it! (barely!)

Speaking of Kobe, the best closer in the game told his buddy LeBron James that he misses him by promptly bungling 5 out of 10 free throws. Way to go MJ wannabe. That experience though, might light a fire under the Kobester's a$$, so good luck, Courtney Lee. Make Stan proud. 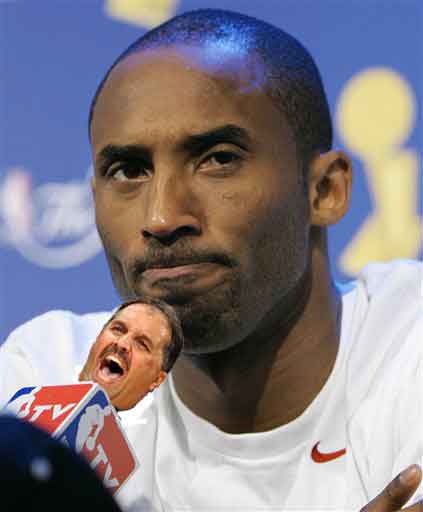 Spit it out Kobe. You feel guilty leaving puppet LeBron to rot with Lil Dez. (that was an awesome diss ad, by the way)

So did you manage to find the Vee Gees? (not the musicians) I hope not because I damn near killed myself doing the worst photoshop job ever. We're halfway through the Finals losers! One final push and we'll all be liberated of this vise-like grip that Sternacus has put on us. Keep the comments coming. It's free, ya know? Doesn't hurt that much to admit to being a loser, really. Or maybe I'm just used to it. Gah.