The Day The Season Died

Share All sharing options for: The Day The Season Died

It is the popular belief around here that the Spurs chances at a championship, or even a deep playoff run, ended when Manu Ginobili was diagnosed with a stress fracture in his ankle on April 7th. I say it ended before then. Any realistic chance the Spurs had for a deep playoff run went up in smoke the day Matt Bonner convinced Coach Pop that he was a legitimate option as a starter. If I had to pick a day, it would be Feb 8th when the Spurs beat the Celtics in Boston on the strength of Mudbutt's 23 points and 8 rebounds. I'm just going to say it was February when he had a string of solid games averaging 11 points and 6 rebounds a game. 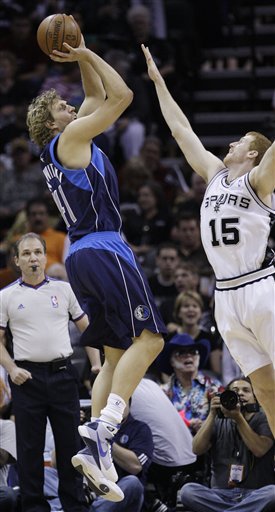 We saw too much of this

Yep, I'm saying it. We weren't winning anything with Matt Bonner as a our starting power forward. Obviously, I'm viewing this in hindsight after the debacle that was the Mavs series. However, we should have seen it coming. I should have at least. I pour over the box scores and the team stats. Yet somehow, I didn't notice the tell-tale signs as they unfolded. What did those signs point to?

BonBon's playoff plummet was just a continuation of his performance in March and April. He shot only 30% from 3-pt in 17 games in March. That is a pretty big sample size to be that bad. Those are downright Corpse of Robert Horry umbers. In addition, his rebounding dropped to 4.5 boards a game. In the last two months of the season, MattyB only had 6 games -- out of 25 -- in double figures. During that stretch, he shot 33% from 3-pt land. In April, his rebounding dropped to 4.1 per game.

Matt's playoff performance was just a continuation of this downward trend. He only scored 15 points in the 5 games. 11 of those were in game 2 when he shot 3-9 from the field. His best shooting game of the series. He shot 22% from the field, 23% from 3-pt, and grabbed 3.2 rebounds per game. 7 of this 16 rebounds also came in game 2. If you throw out his stand out game 2, he scored 4 points and grabbed 9 rebounds in 71 minutes.

You know what the worst part of all this is? I'm talking about the parts of the game THAT ARE HIS STRENGTHS. I know during the Mavs series that I said Dirk was a bad match up for Big Red, but was he really? Dirk wasn't going to muscle him in the post. He wasn't going to jump over him. Dirk isn't especially quick off the dribble. All of these are things that give Bonner trouble. The fact is, that Bonner is so weak defensively -- and we all knew this going in -- that Dirk was going to have a field day just like every other half-decent power forward in the playoffs would. Matt getting abused by Dirk wasn't surprising. It was just very unnecessary.

The stunning part, to me at least, was that Bruce Bowen was a better option on the offensive end than the Red Rocket. Yes, I went there. Bruce Bowen is a better weapon on offense than Matt in the playoffs. You don't believe me, ok, here's my thinking. Who would you rather have shooting the kick-out work-it-around three? Matt Bonner or Bruce "I make big corner 3's in the playoffs all the time" Bowen? Bruce shot 43% from 3 this year. Ok, that was the easy one. This is the one that I learned in the Mavs series. I would rather have Bruce taking his man off the dribble than Matt. Yep, I went there too. Bruce Bowen does a better job driving the ball when his man runs at him than Matty. Now stop. Let's think about that statement for a while. Close your eyes and envision Bruce driving to the basket. The ineptness, the clumsiness, the lack of handle. Yep, he's still better. Add it all up, and there is no doubt whatsoever that Bruce Bowen is a better power forward in the Spurs system than Matt Bonner. 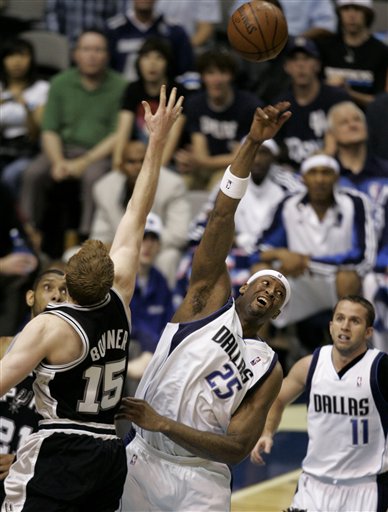 "Damn, I almost touched one."

This season was doomed alright. But it wasn't Manu's injury. It was the dreadful string of games in February where Matt Bonner pulled the wool over Coach Pop's eyes. I don't know what this offseason holds for us, but it better be something that gets us a new starting power forward.