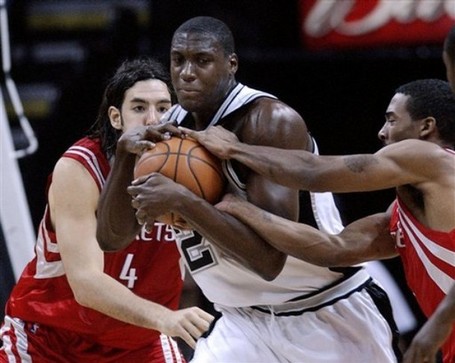 Eat your heart out, Luis. It's all about ME! | [via cache.daylife.com]

By now, most of you have hopefully read LatinD's excellent post regarding our Spurs' serious lack of athleticism. If not, go read it now. The entire premise for this article is to suggest how to solve that specific problem.

Even though we don't generally read too much into stats around here, I want to give a bit more evidence to support the basic thrust of his argument. Hopefully, this will shed some light on the suggestions made later in this post.

So, first of all comes our standing in the ultimate hustle stat: offensive rebounding. The Spurs are dead last, and almost 1 full offensive rebound per game behind the second-to-last team. This is simply unacceptable.

The second damning piece of evidence is free throws. Now, we all know that the Duncan-era Spurs have never been a great free-throw shooting team, but when you are getting far less free throw attempts per game than all other teams, you're not getting to the rim, or even into the paint, nearly enough.

But wait, there's another "hustle stat" the Spurs trail the rest of the league in! How about forced turnovers? It's hard to make game changing plays when you refuse to mix it up a bit.

As a matter of using proper PtR form, let's hear the flipside of these statistical arguments. The Spurs also gave up the fewest turnovers, free throw attempts, and offensive rebounds of any team in the league. They also ranked near the bottom in blocks, and shots blocked by opponents(sorry, no link for that one). So all this statistical nonsense is moot, right?

Although the Spurs are a very careful, disciplined team, they take caution to such an extreme that they are actually hurting themselves. This, however, is more a result of personnel than the Spurs' system itself. I mean, how many blocks, offensive rebounds and steals can you reasonably expect to get out of a starting lineup that features Matt Bonner, Michael Finley, and Roger Mason Jr.?

Don't get me wrong, Pop is partially to blame here for being too stubborn to see the problem until it was already too late. But Pop is a guy who usually learns from his mistakes[after a nice summer of European wine-sampling], and I think next year we're going to see Pop change his regular-season strategy a bit. This will be partly because he knows it will give the Spurs a better shot in the playoffs, and partly out of [salary-cap] necessity.

The Spurs may go out this summer and sign a free agent to help plug one of the holes at forward, whether it be Ariza, Kleiza, Rasheed Wallace, or someone else who is less well-known(my money's on this one). This post isn't about free-agent signings, though. No free agent is going to save this team - it would likely be of some help, but doesn't address the fact that the Spurs' bench is simply too old, slow and unathletic to keep pace with the other teams we are competing with, let alone make up for some of our starters having those same qualities.

And this is where the word "harvest" comes into play.

The Spurs have quite a bit of young talent in the pipeline right now. Tiago Splitter, Malik Hairston, Marcus Williams, and James Gist all come to mind. They also have 3 second-round picks this year. Realistically, we won't see Splitter until the 2010-2011 campaign. However, those other three guys could all be wearing Silver and Black next year - and I hope they all do.

The Spurs are already in a pretty tight salary cap situation, which is only going to be made worse if the cap is indeed lowered, as many analysts think it will be. The situation seems to dictate(very loudly) that the Spurs need to just sign these guys and let them play. Also, developing the Toros roster separately[without Spurs roster players in Austin] means they might be able to find another gem like Pops more easily. There's a reason we have the Toros - it shouldn't be where draft picks go to die. These three guys(Williams, Hairston, and Gist) have already proven themselves, whether on the Toros or in Euroleague play. We've been growing the talent pool for a while, it's time to bring in the harvest.

So, we'd have these under-25's on our bench: George Hill, Ian Mahinmi, Marcus Williams, Malik Hairston, and James Gist. Most of them are disgustingly athletic, and are pests on defense(jury's still out on Ian, but I have hope). Pop needs to give these guys serious playing time to speed their development. But that cleans out all of our best prospects not from Brazil - so, then what?

We use the draft, and summer camp, to gain some new talent.

Which brings me to Tony Parker's role in all of this.

Oddly enough, Tony Parker may be a bigger key to the future long-term success of this team than any of us ever thought. Obviously, his value as a player is higher than any other Spur, mainly due to his age. However, Tony also happens to be the Director of Basketball Operations for ASVEL in France. Why is this such a big deal? It doesn't seem like that big of a deal to anyone but Parker at first glance, until you consider that the Spurs have been actively seeking agreements with Euro teams the past couple of seasons to help develop draft picks - agreements like the one that had James Gist playing for Angelico Biella this past season.

Let me paint the picture more clearly. From now on, when the Spurs invite future draft picks and prospects in for summer camp, not only do Pop and RC get to evaluate talent for short-term needs, but we essentially have the GM of a european team getting a firsthand look at every single one, as well. One suspects that Tony's newfound power in that regard is going to help the Spurs immensely with player development. Let those guys ink one or two-year deals with ASVEL, like was done with Gist, to watch their development. Tony probably wants the best chance for ASVEL to win, and by being the first to observe these guys, he gets a leg up on his French competition, and the Spurs also get better access to scout them. Its a win-win.

So after a given draft(like the one coming, in which the Spurs have those three second-round picks), the Spurs could invite all their picks, and a handful of Euro free agents to training camp for tryouts. The Spurs could then assign any new talent they believe could be useful in the short-term to the Toros, and give any longer-term projects over to Tony, with the understanding that the Spurs would make a decision whether to sign them after a year or two with ASVEL. 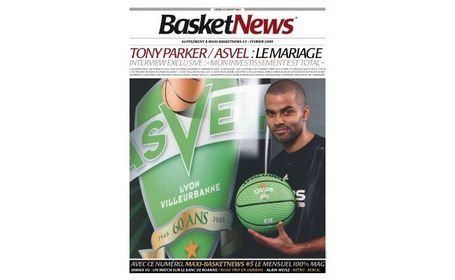 The boss man himself | [via www.basketnews.net]

Now if only Tony could buy out Matt Bonner and send him to France. Then we'd really have to love the little Frenchman.