Shaq: "Trade Me To Team USA"

Share All sharing options for: Shaq: "Trade Me To Team USA"

Shaquille O'Neal, the self-proclaimed "Most Dominant Bigman Ever," has played for the Orlando Magic, the Los Angeles Lakers, the Miami Heat, and most recently, the Phoenix Suns in his 16-year Hall-of-Fame worthy career. The always-quotable vagabond center has been involved in trade rumors this season with the Cleveland Cavaliers, and more recently, with the Dallas Mavericks. However, in an exclusive interview with Pounding the Rock, the loquacious O'Neal confirmed that while playing for either of those teams would be preferable to his current situation, he is not that interested in either scenario. He has his eyes on a more star-studded team.

The Shaqalicious interview, after the jump...

Shaquille O'Neal: I want to be traded to Team USA, brah.

Stampler: Team USA? The one that just won the gold medal in Beijing? That Team USA?

Shaq: Yeah. I think I could be the missing piece of the puzzle for them.

Stampler: What missing piece? They won the gold.

Shaq: That's my new nickname for Dwight Howard. I frequently like to taunt my rivals by publicly questioning their sexual orientation. I'm provocative, brah.

Stampler: Some would say you're just offensive, immature, ignorant, and rude.

Shaq: I don't pay attention to mere mortals. I'm the son of Jor-El. I am not of your world.

/we mumble at each other for six awkward, and yet oddly hilarious minutes.

Stampler: So Shaq, why do you want to be traded to Team USA?

Shaq: I'm a winner. Always have been. I've won everywhere I've been except college, Orlando and Phoenix. I'm tired of playing with loser point guards like Chris Quinn and Steve Nash, brah. I wanna play with a point guard who can get me the ball, and Team USA's got three of 'em. That's some good depth.

Stampler: Are you aware that Team USA isn't a real NBA team? It's just a group of NBA players put together to compete in international competitions.

Shaq: The league always expands. We always get new teams. It's 'bout time for another. But this time, a good one. Memphis sucks, brah. They're a WNBA team. They should be absorbed into the WNBA and Team USA should be the new expansion team.

Stampler: But Team USA doesn't even have a home stadium. What city would they play in?

Shaq: We don't need a home stadium. We could be a traveling road show, like the Globetrotters. We'll come to your town, whoop your punkass team on the court, drink your booze, raid your fridge, sleep with your women and be on our marry way to the next city.

Stampler: I admit, that does sound like an oddly appealing idea.

Shaq: I'm filled with good ideas. Like making up my own words and grammar. I'm a word Shaqapreneur. See what I did there? I took the word "Entrepreneur" and put my name in it. I'm witty. The NBA needs my personalty in the playoffs.

Stampler: Shaq, even if Team USA were allowed to be an expansion team, don't you think that the owners and fans of other teams like the Lakers and Cavs would object to their best players leaving? Those guys have contracts binding them to their clubs.

Shaq: They'd have no choice brah. I come from a military family. When Team USA drafts you, you gotta come over. Otherwise you're a punk draft dodger. You'd have to run away and live in Canada and play for the Raptors. You think RuPaul wouldn't rather play for us than the Raptors?

Stampler: Well what about the salary cap?

Shaq: What about it?

Stampler: I think Team USA would make like four or five times the league's salary cap. And who would pay the luxury tax? The team doesn't have an owner.

Shaq: The American taxpayer would pay it. They'd be the owners. You have to spend to win brah. That's why I want out of Phoenix. That guy won't spend nothin'.

Stampler: He is paying you $20 million dollars this season.

Stampler: I see. Do you really think this is a plausible idea, Shaq?

Shaq: I think it's plaus-izzle. See what I did there, I cha-

Stampler: I got it.

Shaq: This is the best idea I've ever had. People love dynasties. The Yankees. The Russell Celtics. My Lakers teams. We'd be the team that everyone loves to hate. We could even challenge the '96 Bulls for most wins in a season, as long as Kobe and LeBron get me the ball.

Stampler: On a team with Kobe Bryant, LeBron James and Dwyane Wade, all at or close to their respective primes, you'd expect to be the focus?

Shaq: You gotta feed the bigman brah. I command double teams and get guys shots.

Stampler: Yeah... I guess. You really think Coach K would leave Duke to sign up for this?

Stampler: So who would you play for? You don't respect Riley or Phil Jackson anymore, and obviously not Stan Van Gundy. Who's left?

Shaq: Me, that's who. I'll be the player-coach, like Russell was. If Kobe's being a ballhog, I'll send his ass to the bench.

Stampler: Clearly, you've thought of everything.

Shaq: It's why they call me The Big Aristotle, Brah.

Stampler: And by "they" you mean "you," eight years ago.

Stampler: One last question Shaq. Every team, even a dynastic one like Team USA, needs a rival. If you scoop up the best players from every contender, who would be Team USA's rival in the NBA?

Shaq: We won't have any Spurs, so them I guess. They still have Mr. Duncan.

Stampler: You think the Spurs could give you competition?

Shaq: No, not really. But I just forgot what it was like to beat them in a game.

Stampler: Maybe it would be a close game, if they resorted to Hack-a-Shaq.

Shaq: That Pop's a coward. Bring it on. I make 'em when they count.

Stampler: Apparently 52.8% of them have counted so far.

Shaq: You've gone too far brah. I will not be disrespected. 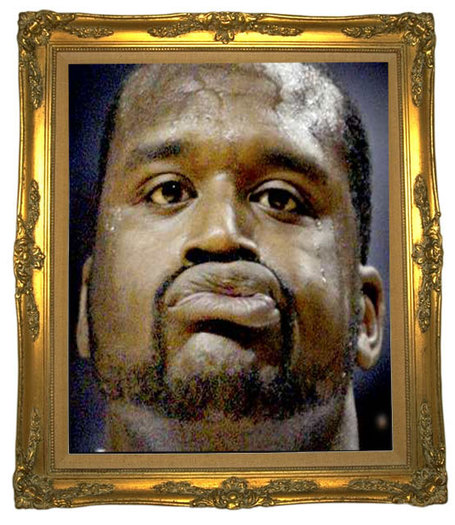