It's like the original BDL version, only more so!

This is going to be difficult, and even, some might even argue, treasonous of me. You see I hate the Mavericks. I hate every single thing about them. And I don’t mean "hate" like the cliché sports fan version of hate where you merely root for one group of strangers over another group of strangers because of geographical attachments and preferable uniform colors. No, I literally hate the Mavericks.

Like, if their team plane were to crash, I’d probably shake my head sadly for a few seconds, because it’s technically always BAD when a plane crashes, but then I’d drink a Coke and go on with my day. I wouldn’t, like, sit and there and ruminate on it, you know? I would just shrug my shoulders and life would go on. 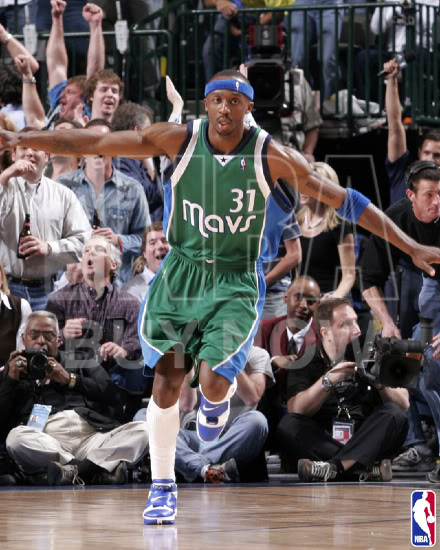 So, I guess Mr. Nutpuncher couldn't fly after all.

I’m the guy rooting for that one-in-a-million chance that Mark Cuban will actually go serve hard time for insider trading. And that he’ll have a frisky roommate all too eager to show him his idea of "hard time" and "insider trading." (Now that would make for an interesting "Blog Maverick" entry. No, I don't care about your opinion on the iPhone, you asshat.)

I’m the guy who finds Dirk Nowitzki to be the most likable Maverick by far, and I wouldn’t piss on Dirk if he were on fire. The guy’s German after all and for all I know he’d enjoy it. 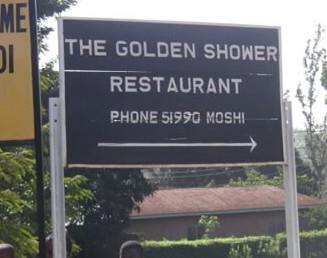 Have I painted a detailed, yet colorful enough picture for you? Is there anyone out there having difficulty understanding where I’m coming from? No? Good. Because you see my friends, despite hating the Mavs with every fabric of my being, I’m afraid I’m gonna have to pick those bastards to "upset" the Spurs in six games. Yeah, I know, I suck. I'm a horrible person. I hope I get this wrong, honestly.

While Ginóbili has spent most of this season in a jacket, delighting crowds with his comic timing and romantic flair, he’s generally been more valuable in the past as a postseason assassin. In losing him the Spurs are missing their only penetrator besides Parker, their peskiest defensive playmaker, their most clutch free throw shooter and just a guy who manages to make the momentum turning play more often than not. We at PtR would contemplate sacrificing a carnal evening with Mila Kunis for a healthy Manu Ginóbili (in the end we’d still probably opt for the former, but at least we’d have contemplated it).

Here's the reality of it: Due to Manu's stress fracture, we are in the unenviable positiion of having to depend on mediocrities like Roger Mason Jr. and Michael Finley (FOR GOD SAKES MICHAEL FREAKIN' FINLEY) for much-needed clutchness. Does that sound like a recipe for success to you? Pop has abandoned George Hill, who for my money is no worst than our third best bench player (behind Kurt Thomas and Drew Gooden) in favor of Ime Udoka, who is a decent wing rebounder and beyond awful in every other facet of the game. He's kinda-sorta hinted that Bowen might have a place as the ninth guy in the rotation, but only because Manu's hurt.

Pop's lost his fastball, and how anyone can argue otherwise at this point is beyond me. Exhibit A, as always, is his open contempt for anyone under 30. Exhibit B is his love affair for Finley, who never has done anything to deserve it. Exhibit C is his new-found appreciation of Udoka, who's just as bad as Fin. Exhibit D is his backup point guard bungling. He loves Hill he says, rookie's not phased by anything, very mature, and he knows how to go to the basket. But he yanks Hill and goes with Mason anyway, even though he doesn't know how to get to the basket. Mason's turnovers go up and his shooting percentage goes down. Pop says he's very pleased with Mason's play, and then the next game tries Jacque Vaughn, FSM help us. A few games of the JV and it's back to Mason. Then Pop admits that the plan all along was to have Manu be the de-facto backup PG. Scratch that, it's Mace again.

If the Spurs win this series it will be strictly because of the brilliance of Tim and Tony and not anything Pop does. I firmly believe this. At this point he's become a caricature.

I have no idea how Tim will hold up in this series. The rest between games should help, but I'm guessing the Mavs will bang him around a bit to test those knees. I don't think he's magically healed all of a sudden and his fourth quarter against the Blazers is still relatively fresh in my mind. I know the playoffs will get his adrenaline flowing, but the Mavs have some size and athleticism to throw at him.

The key to this series will be our second big on the floor, whether it's Bonner, Thomas or Gooden. They all have differning strengths and weaknesses. Bonner can stretch the floor, but he's been terrible ever since Gooden came aboard, doesn't rebound well and is a marginal defender, at best. Thomas can board, but his offensive game is limited and he's not quite agile enough laterally to keep up with Dirk. Gooden is a post-up threat and okay rebounder, but his pick-and-roll defense is reminiscent of a young Shaq. Or the current one.

I think what I'm trying to say is that Nowitzki will be a tough match-up for us.

Sure, we have some advantages. They've got nobody who can guard Tony. Tim has to be doubled or he'll hurt them inside. We've got home court. Dallas is not, let's say, the mentally toughest team out there.

But I just can't see this Spurs team winning a playoff game on the road. Sorry. And winning all four at home, with no slip-ups, is a bit unrealistic.

To me, it's a win-win scenario. If we lose, then Duncan has most of the spring and summer to rest and heal up. Parker can take a breath before his pressing international commitments. And most of all it will be a wake up call to the organization - and to Pop - that the team needs to get younger, faster and springier. I know it's become fashionable to trot out Manu and Tony as arguments that Pop isn't averse to relying on youth, but people forget that back then he almost had no choice. The first championship came in '99 and in the ensuing years the team got old and stale. Their wings and point guards couldn't penetrate or keep up with Kobe. The team just couldn't score enough, period. Pop took a chance on Tony in '02 and Manu in '03, but even after winning a second title, wasn't sold on either, preferring Jason Kidd to both. His defensiveness about the topic and assertion that the team would've still tried to keep Tony and Manu, even with Kidd on board, is so much bunk. We know how the team operates with the cap by now. If Pop got his way those guys would've gone on to become superstars elsewhere and we'd be stuck on two 'chips.

Suppose Pop had the four titles on his resume but he had the '09 version of Terry Porter as his starting point guard, someone like Mike Bibby. Suppose he has the '09 version of Steve Smith as his shooting guard (oh wait, he does). Now suppose he has two rookies, an 18-year old Tony Parker and a 24-year old Manu Ginobili on his bench. You think Mr. Four Trophies plays those guys now? Ha. 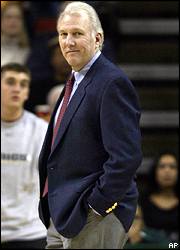 Smirk it up, you Smirkasaurus Rex

After Tony's second travel and third brick he'd be benched, below Vaughn on the point guard depth chart. And I don't want to even imagine what would become of young Manu after he tried a crazy wrap-around pass or one of his rookie steal gambles goes awry.

Pop has forgotten what has made him successful. Only losing can remind him. And if it turns out that the formula all along wasn't age or youth, but simply the once-in-a-genaration triumverate of Tim, Manu, and Tony, well then it would mean that Pop was never that important in the first place, right?

HOWEVUH, if we do win, if the pathetic Mavs can’t even get by an ancient, Manu-less Spurs with a gimpy Tim Duncan, then maybe my hatred of them is pointless after all and the rivalry’s already a thing of the past. Beating Cuban and co. would be pretty sweet, regardless of the circumstances. It'd be a nice memory to keep from a lost season where Murphy's Law has been the prevailing theme. And if you local yokels are stoked about Cubes diving into your tourist attraction, hey great, more power to ya.

* Okay I made that up. The Mavs prefer Goldschlager. Jagermeister just sounded more diabolically evil.