Garnett's Knee Refuses To Be Intimidated By His Intensity

Share All sharing options for: Garnett's Knee Refuses To Be Intimidated By His Intensity

(AP) Kevin Garnett, the reigning Defensive Player of the Year and the prominent star of the defending NBA Champion Boston Celtics, called a press conference at the TD Banknorth Garden, the team's home arena, to publicly express his displeasure at his sprained right knee. 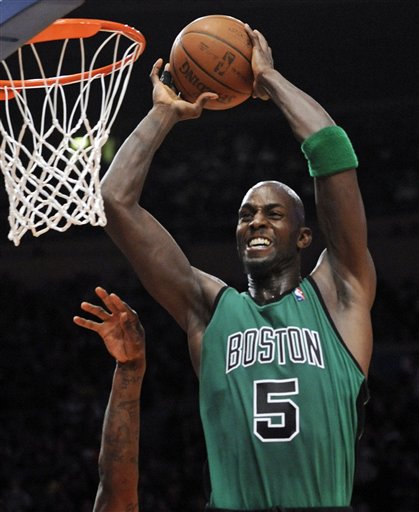 Garnett, pictured above, seconds before he angrily threw the ball into the stands for refusing to obey his command of going into the basket.

Garnett, nicknamed "The Big Ticket," initially suffered the injury over two months ago in a road game against the Utah Jazz and it was thought at the time that he would be out only two-to-three weeks. However the 13-year veteran power forward's knee has not responded as expected to treatment and rehab and after returning to the court on March 20th for a game at San Antonio, his comeback lasted only four games before he was shelved again with the same injury.

"I can't take it anymore," Garnett said in his emotional, at times teary press conference. "I've tried everything, man. I've tried screaming at it. I've tried giving it a motivational speech. I've tried making angry faces at it. I've called it a 'motherfucker' until my throat was sore. I even tried punching it when the referees weren't looking, but I think that just made it worse."

Garnett, who won the NBA title in his first year with the Celtics, is known for his intense play and his fierce, intimidating on-court persona. However, he has been flummoxed that the knee has failed to respond to his repeated cursing, his penetrating, unblinking glare and his rampant cheap shot bullying; all characteristics of Garnett's game that have served him so well throughout his distinguished career, and particularly so last season.

"I haven't been this pissed at anything that wasn't wearing a Spurs uniform," Garnett said in a loud whisper, before baring his teeth at the reporters in attendance and defiantly throwing his bottled water on the ground. He then rose suddenly and screamed "Cocksucker" before gingerly walking off the stage with a slight limp. The transparent gesture, which looked to be plainly rehearsed well before, intimidated absolutely no one.

If Garnett's knee doesn't improve in a hurry, then more of a burden to defend the team's championship will be placed upon the shoulders of last year's Finals MVP, small forward Paul Pierce.

"It's gonna be tough [if Garnett is out or playing injured]," admitted Pierce. If KG is out then I guess me and Ray [shooting guard Allen] will have to take more of the critical shots."

He paused before explaining, "Well, technically we took all of them last year anyway, but now we'll have to more so."

"I just don't understand it," Rivers said. "Y'all know we're all about Ubuntu here on this club," he began, referencing his well-chronicled motivational ploy of using an African philosophy that emphasizes everyone in the tribe working together as one. "Well KG's knee is just flat out ignoring me and ignoring Ubuntu. It just refuses to surrender its will for the good of the team. Unless we can get the knee to stop being selfish and to start embracing our group concept, we're going to be in trouble."

Meanwhile Allen, the Celtics' other star refused to comment publicly, but strongly hinted that Garnett's knee injury was a part of a conspiracy by League Commissioner David Stern to easier facilitate a finals match-up between the highly popular LeBron James of the Cleveland Cavaliers and Kobe Bryant of the Los Angeles Lakers.