So an interesting debate sprung up on message boards across the country as news of Finley’s non buzzer beating three against Sacramento came out.  Undoubtedly a Spurs fan would write on a wall post "Bout time we finally get a call after years of blown calls that have cost us championships" or something to that extent.  This was immediately followed by a post (probably from a Suns fan) that the refs had been blowing calls in the Spurs favor for years and only an arrogant Spurs fan could possibly believe that they had not been the beneficiary of hundreds of bad calls.  This got me thinking about whether or not every team has this constant debate.  It is not hard to come up with a list of calls that have gone against San Antonio throughout history.

·        Duncan being ejected from a game while sitting on the sideline because Robert Horry made a funny joke at an inconvenient time.

·        Brent Barry last year getting fouled in the waning seconds of game 4 against the Lakers because he didn’t "sell the foul".

·        The failure of the refs to eject the entire Seattle and Denver frontcourt for repeated attempts to murder Manu Ginobili in the 2005 Playoffs.

·        Any call that has ever been called against Tim Duncan, since he has clearly never committed a foul in his 12 year career (why else would he argue and get all bug-eyed?)

As previously mentioned Suns fans feel there might have been a foul or two that have actually gone in our favor over the years.  Take for example exhibit A 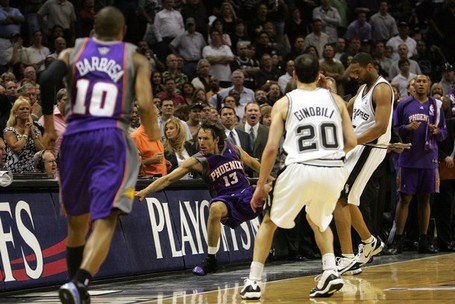 Horry's feet don’t look like they are moving…I think it was clean.

A list of calls in the Spurs favor is less easy to individually identify but most other teams would say that Bruce Bowen should just start with 3 or 4 fouls every time he enters a game to make everything equal.  Similar allegations would fly about Manu’s flopping, Tim getting favorable calls because he’s a super star, or even Tim Donaghy reffing game whatever in whichever playoffs cause he’s a crook.

To me the obvious response to this “the games are fixed” or “David Stern wants the Spurs to win” approach is that is doesn’t make sense. Tim Donaghy aside, for the league to make money it has been rather clearly established that it needs big market teams with outspoken superstars to make it to the finals.  Kobe and Garnett last year was a much better ratings draw than Duncan and Billups in 2005.  Why would the league want a team of defense-oriented, quiet, low-scoring, well-balanced players from a small market that go out of their way to eschew the spotlight led by a sarcastic pockmarked little man that loves nothing more than to mess with the league’s establishment and bench his best players on a whim.  Seems to me that they wouldn’t create special rules and surreptitiously inform refs to help us win games so that they can have yet another record low ratings bonanza in the finals of the NBA playoffs.

Then this occurred to me. Maybe this is the deal for all teams.  You remember vividly the calls that went against you because they were so important and left you with that gut-wrenching feeling of doom and injustice while the calls that go your way are just all parts of the FSM’s good plan for your team or destiny or whatever high-carbohydrate deity it is that you turn to for guidance.

So I’m not sure exactly what my conclusion is.  I guess it could one of three things.  First, I am not real sorry for the Sacramento Kings.  It happens to everybody and you were probably going to lose anyways.  Plus, when you get Blake Griffin in the first round of the draft next year you might be thanking us.  Second I think I can conclude that maybe we should all realize that refs are people too and mistakes happen and bad calls go both ways and we should all quit our bitchin’ and play some ball. But clearly my final conclusion is that the previous conclusion was crap and the Spurs have had way too many calls go against them and we are clearly owed a few by the league.  Oh, and Joey Crawford is the devil.