Losing to the Dallas Mavericks is like going to the doctor...

...you've wasted two hours of your day and you have to endure a small prick.

The more things change, the more they stay the same.

It used to be that losing a game to the Mavs would send me into the kind of depression that only a Coldstone sundae, some online poker and a half hour session with a Jenna Haze DVD could help me snap out of. Lately though, the Mavs have become practically irrelevant due to injuries (The Big Bug, Stackhouse, Terry) and personnel bungling (the Harris-Kidd trade). They're still a playoff team, but not a legitamate threat to anyone, and even they know it. Their whole franchise has been going through the motions and even Mark Cuban has mostly kept himself off the radar, not having it in him to be the villain he's been in years past.

It's not everyday someone gets called "unprofessional" by people who get to watch Carmelo Anthony and J.R. Smith on a daily basis.

Mark Cuban on the Court Arguing with a Referee (via MumbotheShaman)

It used to be that the Spurs would have to play at their absolute best to beat these guys. But the last couple of years we've beaten them with just Manu and Tony, or just Tony, and really, while the wins were satisfying, it never felt like we had just conquered some elite team, the way wins over the Lakers or Celtics feel. The difference between beating Dallas and Phoenix and beating LA, Utah, New Orleans, Boston, Detroit in the past, maybe Cleveland now, is that with the Suns and Mavs, the hatred isn't for the teams as much as it is peripheral reasons (the fans for Phoenix, the owner for Dallas). But with the Lakers, Jazz, Celtics, etc., wins against them feel like we're actually accomplishing something, because you hate the team you're playing against, but you respect them and have that appropriate fear that Pop always talks about.

Honestly, I'd just about dropped Dallas off my NBA consciousness. They just don't matter the way they used to. I don't think anyone will pick them to win a first round series this year, regardless of who they match up against, not with an ancient point guard, a shaky bench and an aging core of guys with well documented histories of coming up small in the playoffs.

So, knowing all this going in, it was a bit odd to see Cubes ripping his team on the eve of a Spurs game, but in retrospect it made perfect sense. For once he didn't blame the refs or David Stern, but his own guys. He basically called them out in a desperate attempt to not get embarrassed at home to less than full strength San Antonio team. I think the guy already knows they have no chance to win the Finals (he's not that stupid), but if they lost last night, I really don't think it would've been another loss. It would've effectively ended the Spurs-Mavs rivalry. It would've been the end of the Mavs mattering. To anyone. If they aren't any good, and they can't even piss the Spurs off, what's the point of their existence?

Hey, give the Mavs credit. They played well. They played with playoff intensity, and you could even tell how badly they wanted it by looking at the minutes played - their youngsters didn't step up and were quickly dismissed by their coach, Rick Carlisle. He just wasn't going to give them much of a rope - not in this game - and it turned out to be the right decision. Their young guys don't hate the Spurs. They don't have that history. Only Dirk, The Big Bug, Terry, Kidd and Damp were going to win or lose this game for them. And they all came up big.

Pop, either sensing the seriousness of Dallas' purpose or perhaps wanting to streamline his own rotation for the playoffs, followed Carlisle's lead and similarly wasted little time with Hill and Hairston, preferring to give Fin an extended run and using Mace as his backup point. From an outsider's perspective it appears that Pop is already well on his way to treating young Malik like he's an honorary Moonman and "turning him into shreds of psychological wreckage," pulling him and reaming him out after every defensive mistake, while letting veterans run around back there like chickens with their heads cut off. God forbid the guy freelances and accidentally blocks a shot just by using his athleticism. That'd be awful.

The Hill demotion has me more concerned. For one, I still like his defensive ability more than Mason's. He's quicker and can stay with other points, as long as the refs give him a fair shake. Secondly, if Parker's on the bench and Hill's not there, then it totally rules out the possibility of a) anyone driving to the basket or b) having any kind of fast break. Another reason I dislike this is that even though it's not the strongest part of his game, I still think Hill is more of a natural pass-first guy than Mace is. Mace still looks predominately to shoot threes or (grrr) long twos off the pick-and-roll, and with good reason, apparently. Twice when he tried to pass on the move, he turned it over badly. Finally, if Hill is out of the rotation, it can only logistically mean more time for Finley.

And that's never, ever a good thing.

Which leads me to my bigger point: Pop soiled the bed in this game by over-coaching it. By cutting down the rotation he ensured that all our veterans would be huffing and puffing by the fourth. For an old team like us, playing their third game in four days and I don't know, what, sixth in nine days (?), this was a pretty dumb idea. While it might have been a "come to the Flying Spaghetti Monster" type of game to Dallas, we should have still treated it as just another game (because now, thanks to the Mavs' decline, it was), at least for the first half.

Secondly, he scrapped what had worked so well in our last meeting; namely either doubling Dirk with two bigs, or not doubling him at all. And we had played everyone else straight up. In this game though, we didn't do that. Different guys got hot and we panicked. First it was Howard, then Terry, then Dirk, and every now and then Kidd would hit an open jumper. It's one thing to double Dirk, because he's a legit star, but losing your shit because The Big Bug and Mr. Aer-o-plane hit a couple Js, that was dumb. We want these guys to take jump shots, right? If they go in, they go in. Just contest them better. Instead we trapped and pressed J-Ho, Jet, Dirk, whomever and everyone was always running around, trying desperately to rotate. It was madness. Our rotations were so terrible that far too often, the result was the Mavs making the correct pass out of the double team and the recipient of said pass strolling right down an unbelievably open lane for an easy layup.

The Mavs have one great player. Period. When you treat that team like everyone is Kobe, shit will break down.

Ultimately what ruined our game plan was Bonner's foul trouble. He played great while he was out there, 11 points on eight shots (including a couple of nifty dribble drives and even a crossover), and effective enough defensively to be a team-high +13. The problem was that he was only out there for 22 minutes before fouling out (shockingly, Joey Crawford was involved). As sad as it is to admit it, against Dallas Bonner has become almost as critical for us as Dirk is for them. He spaces our offense well enough where they can't pack the lane on Tony or harass Tim too much when we have the ball, and gives us a big who can help guard Dirk on the other end. Without his services we resorted to guarding and/or doubling Dirk with a variety of smalls, and it was a disaster. Pop tried Oberto, who was very effective against Dirk in their previous meeting, for two minutes in the second half, but quickly abandoned it when it produced disastrous results.

The acquisition of Gooden, who, to his credit, said all the right things on Thursday, should help alleviate this potential weakness. With him on board we don't have to reduce Bonner or Thomas' role necessarily, but he can be insurance in case either of them just don't have it on a particular night or they're in foul trouble, or whatever. Most importantly, he should help prevent us from playing Duncan 39 minutes in an unimportant game when he's playing like dog poop, which was largely the case on Wednesday. It's a good thing, I think, to have someone in reserve who can keep the pressure on Rocket and KT to perform on both ends of the floor. If Bonner's confidence or numbers drop all of a sudden because of this, then screw him, it means he was never going to be able to handle the playoffs anyway. If bringing Gooden over doesn't hurt his game (or heaven help us, actually enhances it, rebounding wise), then no harm, no foul. Either way, as long as we're not playing Tinyball out there, I'll be happy, regardless of who the big is beside Duncan.

To me, the most comforting aspect of the game is that I wholeheartedly feel that this was one of those games that we can just chalk up to losing because of Manu's unfortunate injury. It's not a good excuse, but it's reality nonetheless. When you miss your second best player for a length of time, you can overcome the obstacle for a few games here and there by everyone else stepping up and executing perfectly, but eventually the percentages will even out. The fact of the matter is we're just not good enough to consistently beat decent teams without The Sickness. If Manu plays an average game, for him, we score a few more, allow maybe a couple less, and a loss turns into a win. With him out there there's no way Bruce and Findog combine for 61 atrocious minutes. 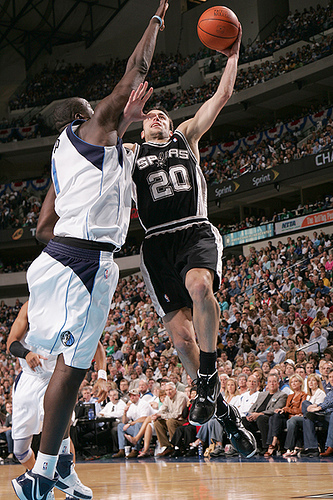 We definitely could've used some of this Wednesday, and I don't mean Desagana Diop.

Uh, no, I definitely don't.

Anyway, in this Manu-less game, after a disastrous third quarter and a back-and-forth fourth quarter, where we were handicapped severely by Bonner's absence and Tim's ineffectiveness, the only guys who could score for us were Mace and Tony. Parker almost singlehandedly led a spirited comeback effort from 10 points down with three minutes to go to just trailing by a bucket, but Tim screwed up one rotation to allow a Howard layup and then, the next trip down the floor, doubling Dirk backfired as Kidd nailed an open three from the corner. It just wasn't our night.

Don't stress out about it too much, peeps. Manu will return soon, frontcourt reinforcements are on the way in Gooden (no matter how bad he is defensively, he can't be much worse than Bonner, who tries hard but just doesn't have the lateral quickness or the physical strength to bang with most guys) and if everything goes according to plan, the team will have a set rotation of veterans peaking in April just before the playoffs.

P.S. "The Watchmen" totally kicked ass. Very faithfully followed the book, except for a couple of things there at the end, and honestly, I actually preferred the film's version. Brace yourself for excessive blue wang though, and its dimensions are certainly worthy of a super-hero. Maybe I just sat too close to the screen.