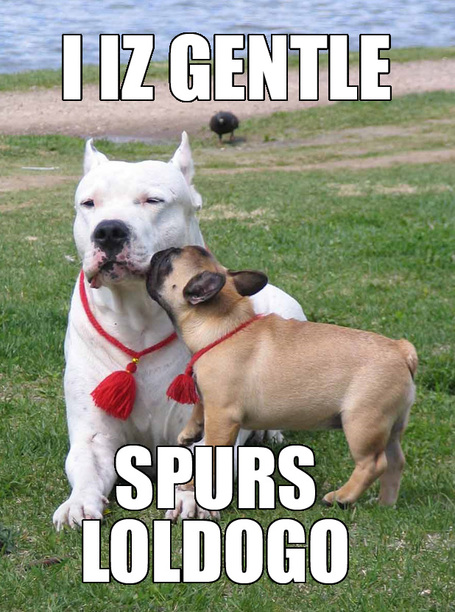 Soon to be photoshopped: the fishpuma
(Go here for more dogo pics you can shake a puma at.)

Sometimes I feel the odd need to add some pictures before the jump - because between you and me, this site looks pretty ugly. ATS is an all-business kind of bum (whoa), and Stampler has gone all serious/professional on us lately. It's like he wants us to read. In a blog, for FSM's sake!

Anyway, two games after losing close games to "a bunch of D-leagues plus Durant", "Yao, Scola, and short scrappy dudes" and "Assmunch who likes to pop his jersey, shooter boy and Bowen's lil' lady", we're back where we started: 1 game ahead of Houston, firmly holding in the second seed and with PTR relatively calm. Of course, there's a difference: Manu is active, and will play tonight. Suddenly, things aren't looking so bleak any more.

I'm adding a poll to know who we disrespect the most. I'm voting for the Mavs, because I want to see Cuban cry. Half-assed preview, after the jump:

EDIT: Tim Varner from 48 Minutes of Hell just told me Hairston is under contract through next season. Huh. See, we're supposed to actually do some research before typing away.

Who would you like to meet in the playoffs?