Manu's Back, At Last.

Share All sharing options for: Manu's Back, At Last.

As I type this the Sweet 16 of the NCAA Tournament is on, and let me tell you, it's just riveting. Now, maybe I'm a flak, just some totally biased homer, but I really think, truly, from the bottom of my heart, that if our Spurs were allowed to compete in the Festival of Awesomeness that is "March Madness" that they would sneak up on these one seeds, grab the momentum, and win the WHOLE. DAMN. THING. (Unless Pop played Mace too long at point guard, of course.)

Unfortunately we're ineligible for this prestigious tournament, or even its ugly sister, the NIT, which if you don't know, stands for "Not In Tournament." (Hey-O! Go Aztecs!) Sadly the only competition for us is something called "The NBA Playoffs." I'm not very familiar with it, but I hear that ESPN and its parent company, ABC will cover most of it, so how can it not be a quality product? I mean, when you learn that the Stuart Scott will be the studio host for this gig, well if that doesn't just scream "premium entertainment, done professionally," I don't know what does. Scott's understated, subtle broadcasting style has earned him much prestige and acclaim on the blogosphere, all of it completely warranted.

I'm not sure how challenging these playoffs will be for our Spurs, but I can't imagine they'll be a day at the spa. Thankfully, one Emanuel David Ginóbili returned from a lengthy stay on the injury list and call me crazy, but if we can ever get him, Tim Duncan and Tony Parker on the court simultaneously, we might just have something there. LA, Cleveland, Boston, bring 'em on. A studly star triangle featuring two aging gimps and a tiny French chucker? Unreal!

Whatever the Flying Spaghetti Monster has up His noodle for our Spurs, they are currently, defying all available logic, still second in the highly competitive Western Conference with only 11 games to go. Ginobili has missed much of the year and was certainly rusty in his first game back. Duncan, the bedrock of the team in every sense, our foundation, has battled tendonosis of his quad and is limited to the point where Pop is sitting him on back-to-backs. Pop's always been notorious for taking more time than most seasoned coaches in settling on a set rotation, but this year's been too dysfunctional for anyone to deal with. Injuries to his two best players, being unable to find a big interior defender/rebounder in-house, no ideal candidates at backup point guard for the umpteenth year, Bruce Bowen's inevitable decline, and now integrating both Gooden and Manu into the team. Unable to focus fully on the playoff push, The Superfluous G has had to coax performances night after night on a motley crew of unsavory gents; guys that I passionately want to believe in, but just can't bring myself to with a straight face. Please FSM, please give Pop help.

At least Manu's back. He couldn't keep up with Flip Murray on defense, couldn't finish layups, and for reasons that I can't possibly fathom, his teammates didn't seem too interested in passing him the ball, but he's back. I guess.

That's it Stampler? That's all you have to say about your beloved Manu? The Sickness. MacGyver. Plainview. El contusión!

What, you were expecting me to compose a sonnet for the guy? Maybe scrounge up an obscure Youtube clip or a sweaty, determined picture of some sort? Relax peeps. There will be plenty of time for that later. Breathe. Give him a few games to work off the rust and the kinks. After missing the first dozen games this year, his breakout game came, coincedentally enough, against the Hawks, and it was his ninth outing of the year, so that's the target to shoot for, around the 10th of April against the Jazz, about a week before the playoffs for him to hit his stride. The questions I, and I'm guessing most of you have are things like whether Pop will try to forcefeed him plays and shots in some frantic attempt to bring Gino's rhythm back faster than it would naturally or will he go the ultra-conservative route, placing a priority on Manu's health and hoping Gino will get better and better as the playoffs go along? Something in between?

Then again, the way Tony's been playing lately, we may not need SuperManu or even Super Tim. Frenchie's been on a roll for so long now, that I'm not sure we can just dismiss it as another hot streak. No one can stop or even contain him one-on-one. He can get his improved J off against anybody. And now he willingly passes it if the lane's packed. 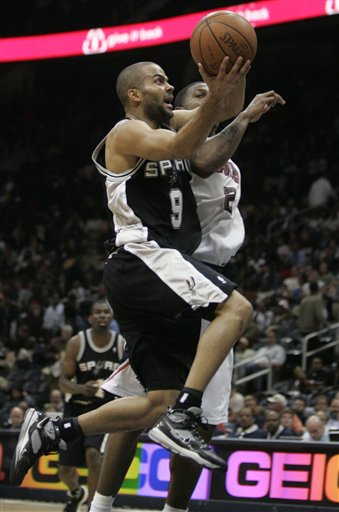 It seems likely that Tony will be our first option down the stretch here and in the playoffs, and naturally our opponents will focus on stopping him first and foremost. How will Pop counterattack? What will he do?

In the past it's been a heaping helping of "Four-down" with Timmy and the Manu show in the fourth quarters. While I expect both of these concepts will return, sometimes, the genie is out of the bottle with Tony. Arguing this is pointless.

Me? I'm not going to worry about the big three. They'll work out their chemistry issues, as they always have. What I am concerned about is the other guys. Will Pop stick with Rocket as his starter or drop him from the rotation altogether? A crazy sentiment? You never know with Pop, who tends to skew even more defensively in the playoffs. Drew Gooden: What will his role be? Or Fatality's. Is he the backup SF now? You don't really think Pop will bench Bruce, do you?

All I'm certain of is that The Roger Mason Backup Point Guard Experiment has been an unqualified disaster. Fab Oberto couldn't be any worse at it than Mace, who I'm sorry to inform you all, cannot dribble a basketball, cannot, I believe, execute either end of the pick-and-roll, cannot get the team into their sets in a timely manner (Manu just got back, he's rusty as hell and now he's got to shoot desperation threes with the clock running out thanks to this lunatic), cannot handle the press, whether it's the half or full-court variety, and cannot guard opposing ones. Think this through, Pop. You don't need much from your backup point besides dribbling the ball to mid-court, handing it off to Big Nose, and playing good D. Go back to George Hill, I beg of you. Don't you remember Nick Van Exel? We've been over this.