First the squeaker, then the speculation

Share All sharing options for: First the squeaker, then the speculation

Believe me, I'm aware that the timing is poor, what with my last post and all, but what can I say? I. Like. To. Gamble. Love it in fact. The rush, the adrenaline, the feeling of superiority when it all goes right. I feel truly alive and engaged, only when I'm risking something. It's probably not a healthy thing, living this way, but what can you do? Like Pop says, we are who we are.

Just when the Spurs look like they've hit rock bottom, losing three of four games, it seems crazy, or maybe totally outrageous, to bet on them to win it all, but I don't care. Sometimes you just have to suspend logic and objectivity and believe in your team. So I bet Manolis, and Ray, this other guy at work $20 bucks each. I told them to give me just the Spurs and Lakers to win the title and they could have the rest of the field. I don't think anyone else is good enough.

Am I nuts? Maybe. But I don't think it's that dumb of a bet. The only Western teams, to me, with a legitamate, at all realistic chance to reach the Finals are the Lakers, us, and the Jazz. Houston doesn't have a proven point or any explosive scorers. The Nooch has no bench. The Moonmen are immature. Dallas is Dallas.

For the East, only Boston, Cleveland and maybe Orlando enter the equation.They're all good, but it doesn't matter. Ultimately only one of them will come out of the East. So basically, I think I I have a two-in-four or 50% shot. I've got the nearly unanimous favorites, LA, plus us. The non-believers have the Jazz and the East Winner. I like my chances.

Mind you I have no intention of rooting for Phil, Kobe, and the rest of the despicable Lakers in June. But if we're gonna approach games in May the way we approached tonight's almost must-win against the Dubs, then I fear I'll have to be thrust into that unwanted scenario. Golden State, under the bloated "leadership" of Nellie, were begging, like always, to be throttled. How we almost lost to this gang of misfits, hooligans and ne'erdowells is beyond me. For most teams, having like eight swingmen in the rotation would seem to be somewhat of a detriment against a so-called contender. Except against the Spurs, who in the past month have had to make do with one real functional NBA swingman and a whole bunch of crap. And they play that guy at point guard half the time.

While Pop continues to drive all of us insane with his "eeny-meany-miney-mo" rotations (all twelve active Spurs saw action, a pretty unusual occurrence for a tight game this late in March), it's becoming apparent that the guys seem lost. Yet there still seems no semblance of a plan. A dozen games to go and Pop still doesn't seem to know what he has or needs from Bowen, Ime, Mace, Fin, Hill, Fab, and even Rocket. Experimenting with Drew Gooden you understand, but everyone? By now you should know who your top ten guys are, period.

And this is the part where I mention that there's a decent chance that our noble big-nosed savior is due back any night now. Not only will Ginobili's imminent return spare us (hopefully) forever more from having to watch Findog's crappy defense for 35+ minutes a night, but it will also absolve Mace of his ballhandling duties. I hope.

Some good things did happen in this game, lest we forget. Tony was awesome as ever with 30 (20 shots) and 10. Bonner looked like he's beginning to snap out of his shooting funk. Tim, after playing just five minutes in the first half, nodded to Pop that he was good to go and responded with 17 and 8 in the second. Mace took, and just about made, almost all the good, open, shots for him to be taking. Gooden looked lost as ever, but at least collected six boards in ten or so minutes. Kurt was Kurt, reliable as ever, and thankfully his two bricks at the end from the stripe didn't kill us. I'd rather not imagine what that would've been like. On the downside, we let the wimpy Warriors just dominate the offensive glass, most of our bench was poor - again - and our defense was very mediocre. After the past two games, not coming out more focused or with a better effort was disappointing to see. 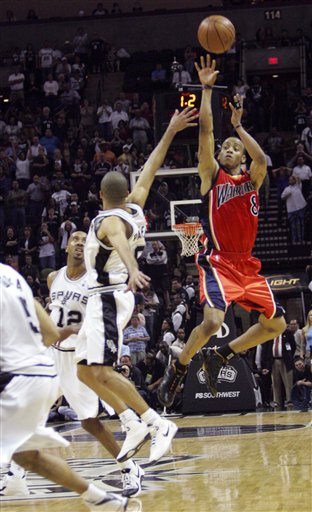 I think I'd be banned for good if Monta hit this shot.

Actually, what probably won the game for us wasn't the current Spurs but rather one ex-Spur and one almost-Spur. Reliable as ever for his unreliability, crazy-ass Stephen Jackson gave us another scattershooting, turnover-laden, error-prone masterpiece. Thanks, Jack. Corey Maggette, meanwhile, couldn't throw it into the ocean. ::giggles::

Feeling good after this one would be silly, but at least it's a win. A badly need one at that. Lo and behold, we're back atop the division and the two seed again after Houston's loss at Utah. Tomorrow's segababa at Atlanta will have significant impact on the standings of course, but the real story will be the playing status of Timmy and Manu. Will both come to play? Either? None? I'm guessing Manu has about a 60% shot and Timmy about 40%. The former wouldn't, in my wildest dreams, get more than 15 minutes and the latter no more than 30. But just the chance to have the whole squad suit up again, I really can't wait for it. It's been far too long. Maybe just having Manu in uniform will make the light turn on in everyone's heads that this is for real now. Maybe all the pieces to the puzzle will finally fit. Maybe Pop will start doing his job and finally figure out his rotation now. With Manu all is possible. Even PtR peace.