After last night's horrendous loss, I thought it appropriate to reflect on happier times... when you could leave your front door unlocked, not worry about drugs and gangs in school, and especially not worry about the Spurs losing to the : : Thunder : : .

I'm talking about a time two weeks ago, when a fellowship of a few brave, hardy souls took their mojo on the road to the AT&T Center, to watch the Spurs confront the gathering storm... of Wizards!

So, I'll start at the top. ATS and Powell offered me a ride to the game. They were leaving at noon and heading to a local watering hole. At first, I declined, because, you've seen ATS's avatar, right? I figured ATS would be like Begbie from Trainspotting, and would get drunk and start brawls just for fun. 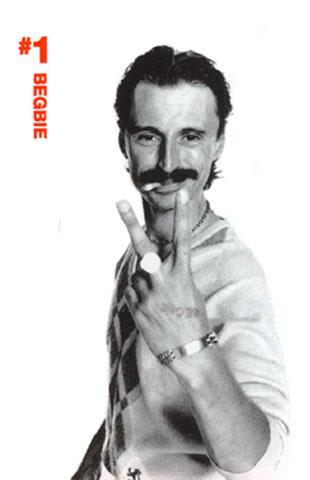 Then he'd get thrown in jail, and how would I get home? But then, I thought, what if he gets mad at me for turning down his generous offer, and comes by my office and beats me up? My office building is pretty dreary, in a gritty industrial part of town--a wasteland of parts counters, tile showrooms, and state agencies. It's like something out of Reservoir Dogs, so a parking lot confrontation seemed like a plausible scenario. I couldn't win. As it turned out, though, I had to work until about 3, so I was forced to decline.

My dreary office where I thought I would receive a beatdown

I let ATS know, and fortunately, he didn't beat me up. I told them I would meet them at Rosario's at about 4:30. Which I did, almost on the dot. I showed up wearing my shiny Spurs warmup tearoff pants (I can tell through the computer how jealous you all are) and 99 Champions T-shirt. So I walk into the restaurant, and I look and see Powell sitting down at a table with ATS, SiMA, and Bones.

I wave at Powell, and he looks right at me and... looks away. No wave, no sign of recognition, no nothing. Now, bear in mind a couple of facts:

1. I'm 6'4" and waving at him, so it's not like he didn't see me. Plus, I posted my photo on Hipuks' illusion crushing thread, so he knew more or less what I looked like.

2. I am decked out in Spurs gear. Granted, it's a game day, so other people are too, but remember... 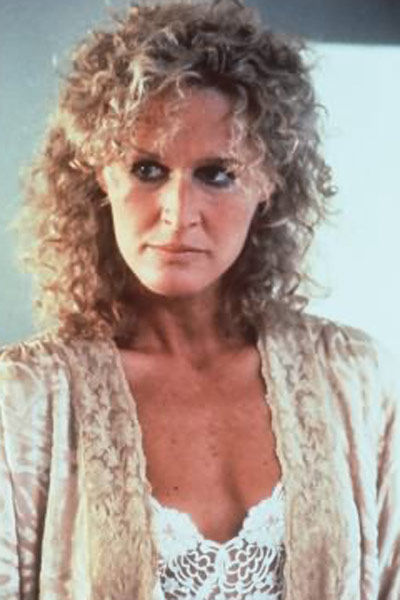 I will not be ignored!

So Powell's a jerk. I may have to boil his rabbit. Anyways, I sit down, and greet ATS and Powell, SiMA (ATS and Powell picked him up from the airport), and Bones, who was also in town.

Shocking how much we resemble our avatars

I ordered a margarita, in order to fit in, because drinking alcohol is a good way to look cool in front of people you don't know well. The waiter brought the margarita, and it's like a fishbowl on a lampstand. It was like a Super Big Gulp, mixed with everclear and tequila. So naturally, I made a super big good impression on my new friends. "Wow, you're cool," they all said.

After putting away a Hipuks' fishtank's worth of margaritas, the PtR crew (now including Bones' wife, Mrs. Bones) journeyed to the fabled AT&T Center. ATS and I drove together in my totally badass VW New Beetle. We walked in from the parking lot to the building, then walked halfway around the concourse before asking an usher where we needed to go. He directed us to an elevator, which we took up to the Terrace Suite level.

Now, I didn't know that ATS had scored Suite tickets from a friend of a friend, and I'm feeling like a big baller. Then we hand our enormous tickets to the usher, who laughs at us and tells us that our suite is on the other side of the building. Like modern-day Magellans, we complete our circumnavigation of the AT&T Center. 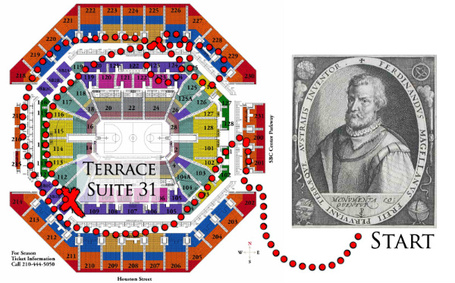 Soooo... we arrive at our suite. Did I mention that we were in a suite? If anyone's seen the Andy Samberg "I'm on a Boat" video with T-Payne, that's our PtR crew. Except for Bones and Mrs. Bones, who had totally lame tickets (lame = not in a suite).

Everybody look at me, 'cause I'm sitting in a suite! Take a good hard look at the m11g suite!

As for the game, well, the Wizards were not as fearsome as I had feared. At Rosario's, I asked Powell and SiMA, in all seriousness, "who plays for the Wizards?" We were able to come up Caron Butler, Deshawn Stevenson, Antawn Jamison, and Gilbert Arenas. ::One:: of those guys played.

We thought we'd have the suite to ourselves, but some oldsters showed up midway through the first quarter. We thought we'd strike up friendly conversation with them, so we were all "Hi, how's it going?" They were all "..."  We were all, "okay, back to watching the game." Maybe they were Powell's relatives.

Findog came out stroking J's, and I was about to jump up and point in Powell's face and yell "Findog!", but then Fin kept missing when I was all prepared to do that. A shame. Jamison scored some. TD looked like he didn't want to be there, and I think he intentionally got into foul trouble to make SiMA mad about flying halfway across the country to miss Manu and see TD for 15 listless minutes. Then Tony scored like 38 consecutive points in the third quarter, Fab dunked (who needs Pops Monster-Jamsu?), and we won going away.SiMA was stoked because they had Shiner Black on tap. A good time was had by all, except Powell, who was upset at the scantily clad Silverdancers shaking their moneymakers, objectifying themselves for all to see. 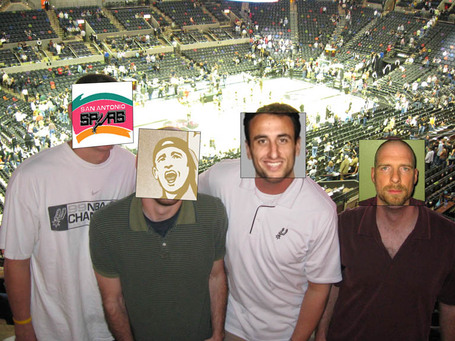 Maybe we should have saved some Mojo for the Thundercats...

I gave SiMA a ride back to his hotel, where apparently he, Powell, ATS, Bones, and Mrs. Bones had a night to remember. I don't think I want to know. Then, I drove the long lonely road back to Austin, feeling fortunate to have survived the inaugural PtR road trip.

I originally forgot to post this pic--The PtR gang with 4 of our best friends. Suck it, Mavs!