'Life Goes On' for the Spurs

Share All sharing options for: 'Life Goes On' for the Spurs

Pop's 1,000th regular season game. A patsy opponent. The momentum and good vibrations of a tough road win at Houston just two nights before. It all seemed so ideal and worry free.

The game couldn't have began any better for the Spurs (okay, technically this would've been better, but I digress). They were up 27-10, playing fabulously on offense, and two guys who've struggled mightily lately with their shots lately in Timmeh and Rocket were strokin' it with dead-eye precision. Tony was orchestrating the offense masterfully, with five first quarter assists. Defensively we were rebounding well, rotating the right way, not giving up lay-ups and not letting anyone but Kevin Durant do anything. All the stars seemed aligned for another "boring old Spurs" blowout, the kind of game that the talking heads gloss over and dismiss but cause people like David Stern and Phil Jackson to think to themselves, "uh-oh."

Then the second quarter started and "Corky" Parker, "Lenny" Duncan and the rest of Team Awesome played less like a squad looking to capture a fifth NBA title in a decade and more like one hoping to be profiled in a Rick Reilly column.

If I live another 80 years (and with my diet, that's less likely than Emanuel MacGyver winning the slam dunk contest next All-Star weekend), I hope to never witness another quarter as sloppy, uncoordinated, absent-minded and just overall wretched as the second stanza the guys put together last night. I couldn't believe I was watching a professional basketball team out there, let alone a good one. One wouldn't think the freaking Thunder would inspire my longest prolonged swearing jig of the '08-09 season (thus far), but I simply couldn't believe what I was watching.

Without further ado, let's go to the play-by-play, and I highly reccomend listening to this while you're reading.

The final, gruesome tally for the second quarter: 6-17 FGs (including 0-3 on three pointers and 0-3 on layups), a 13-to-1 edge for OK City in free throw attempts (to luminaries such as Atkins, Rose, Weaver and Kristic), and NINE turnovers, including one glorious stretch where Tony gave it away on three straight possessions (I remember when Manu would do that... sigh). About the only bright spot for the period was that the lads were still playing reasonably decent defense, when they weren't fouling or giving up fast break dunks that is. Against most teams nine turnovers and 13 free throw attempts would lead to a 34 point quarter, not 24. 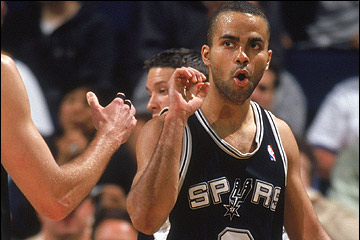 It was that kind of night.

Obviously the main culprits for the miserable stretch were our stars, Tim and Tony, but to me the real villain was Bruce, who simply was not prepared to play in the game and showed a shocking lack of professionalism for being so out of it. Shortly after checking in, he promptly fouled Jeff Green, and it wasn't the kind of foul that routinely happens when you're trying to make a hustle play or trying to thwart a layup or whatever. No. Bruce just out-and-out pushed Green, who had the ball with his back turned some 18 feet from the basket, with his team already in the penalty and in full view of the refs. It was stupid and lazy and inexcusable. Either Bowen thinks so highly of his reputation as a defender that he thinks he can commit blatant fouls and not get whistled for them, or at the ripe age of 37, his coordination is starting to abandon him altogether. A couple of possessions later, after a turnover, Bowen had plenty of time to step up and deny Durant an open three in transition, but for whatever reason he just stood there at the free throw line, content to let a guy shooting 44% from downtown take an uncontested shot - with predictable results.

It should go without saying that the Thunders' 17-2 run wasn't just Bowen's fault, but it would be pretty difficult for you or me to put up a -11 in four minutes of floor time, let alone a finely tuned NBA veteran like Bruce. When it comes to assigning blame, he deserves a big slice of the pie.

Ultimately though, the loss is Pop's, and I'm flabbergasted that the guy never learns from his mistakes. The way he coached the second half was horrendous. The more careless we got with the ball, the slower he turned the pace. 15 turnovers for us is not the same as 15 turnovers for Phoenix. We play, much, much slower. We just don't generate that many possessions. To walk the ball down the floor time after time, when the offense is struggling so much with shooting, ball movement, getting any kind of decent shot, it tremendously lowers our odds of scoring with any kind of regularity.

It's not surprising that Pop frequently falls into this trap during the playoffs. The defenses get better, the opponents dig in more, really focus on taking away Tony's (and Manu's) lay-ups and Tim's post-ups, and Pop just goes into this shell. The more the offense struggles, the more Pop brings defensive players into the game, slows the pace to a crawl and makes us easier to guard than ever. He does the other coach's work for him. It's the bullshit "old, slow and unathletic" self-fulfilling prophecy that drives me batshit crazy. He micromanages the game and turns it into an unwatchable slog instead of trusting his best players to adjust and figure things out on their own. He won't let Tony (and Manu) attack defenses before they're set.

The guys mustered 34 points on something like 38 shot attempts in the second half, with practically the entirety of the "offense" coming from long Parker twos. Finley somehow logged 39 minutes despite shooting only 3-of-10. I can't even legitmately bitch about it because every other swingman was much worse. Duncan had nine points early and the team could never get him going the final three quarters. They could never find a way to enter the ball into Gooden in the post and the bench was out-and-out awful. In fact, as Matthew pointed out to me, the box score showed remarkable symmetry. All our starters were "+"and all our reserves were "-" while for Oklahoma City, the exact opposite was the case. Also, the Roger Mason Backup Point Guard experiment is not working out (call me finicky, but I prefer point guards who can dribble the basketball).

I'd write more but you get the hint. I miss Manu more and more every day. I'm going to start openly weeping one of these days. Pop often likes to say so-and-so was "special" after a big performance but it sure looked like we had a team full of special guys out there Monday. This isn't funny anymore.