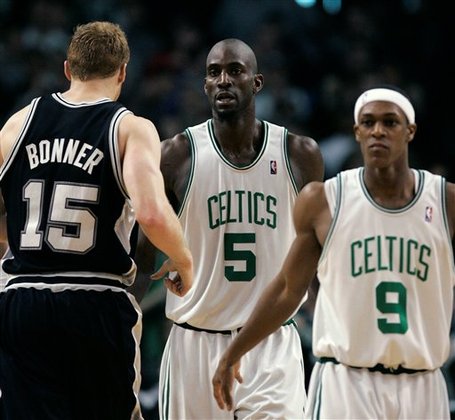 I bet Rondo was totally thinking,

"I wish our power forward was clutch like Matt Bonner"

How long does it take from the time a basketball leaves a shooter's hand from behind the three point line to the time it forcefully swishes through the net?

Long enough for me yell, "No! What the hell are you doing?" at my television, apparently.

Before his successful chuck with less than 21 seconds to go in Sunday afternoon's clash with the favored Celtics at Boston's fabled TD Banknorth Garden (so many memories!), I, and I'm sure most of you, had no idea what one Roger Mason Jr. had done to deserve being on the floor at the game's climax. If Mason wasn't the worst Spur yesterday, it wasn't for lack of trying. Only an ass-tastic tour de force showing from Frenchie McWonderbutt (7 points on 3-12 shooting) was going to spare Mason the goat horns, or so it seemed. Of course, we can all forgive Tony's wretchedness. I mean how could we possibly expect him to focus on something so trivial as a regular season basketball game (Pop told me zat zey don't matter. He eez unbelievable!) when he had a "Live with Regis & Kelly" appearance to prep for the next day?

Then again, it's not as if there was a better alternative. Pop tried all game long to find a second swingman to play with The Sickness and for the first 47:39, the search was proving futile. Mace, Fin and Mr. Potatohead were all showing the classic symptoms of S.U.C.K. (Shamefully Useless Crappy Kleptomaniac) and the test results came back positive for all three. "The Superfluous G" could've opted to play Malik Hairston for the final two minutes and I wouldn't have objected.

Perhaps the only reason - besides an outright hunch - that Pop did go with Mason at the end was that the ex-Wizard had already built an impressive resume of late game heroics in his three plus months donning the black and silver, hitting game winners against the Lakers, Suns, Clippers, and now Celtics. I may even be forgetting one or two. No matter how well or poorly (and it's been more of the latter than the former of late, unfortunately) Mason plays in any given game, he just seems to have a knack for taking - and making - the big ones. That skill in and of itself will be enough to keep him on the floor at the end of games and as long as he keeps it up, it's all Kool and the Gang.

Still, we can't ignore that Mason has been struggling. My guess is that he's a victim of his own success. He roared out of the blocks so fast (helped, in part, by the early absences of Tony and Manu) that not only has he been selected as one of the eight contestants for the Three Point Shootout during All-Star weekend, but he has also, I'm positive, found himself featured more and more on opposing scouting reports. Maybe earlier in the season he was a "Who dat?" but now foes aren't leaving Mace alone regardless of situation, not even to double Timmy. Consequently, Mason, perhaps pressuring himself to keep his numbers up, is taking a lot of awful shots. True to his surname, Roger has been casting bricks in all manner of ghastly ways, launching early in the shot clock, chucking from several feet behind the three point line, or taking hideous turn around fades thinking he's Kobe. We're talking about the kind shots that would make Stephen Jackson blush.

We can only thank The Flying Spaghetti Monster (The Official Deity of PtR) that Mason's indiscretions haven't burned us so far, but hopefully, if he is a true Spur, the euphoria of hitting another dagger will have worn off by now and Mace will be able to review the tape of the Boston game with a critical eye and see how poorly he played overall. Roger's playing a dangerous game here, and it's all well and good when these late daggers are going in, but for the sake of the big picture we need him to play a lot smarter and with more patience than he has been. We don't need him to be a hero. We just need him to do the same things we ask of Rocket: Play intelligently, show up on defense, move the ball, and when the open shot is there, take it. No more, no less. If he just takes what defenses give him then maybe we won't need him to come up so huge at the end so often.

Speaking of Bonner, Ginger Spice had himself quite an outing on Sunday, with 23 points on 10-of-17 shooting, hitting half of his six attempts from deep, including a banker that should've been a four point play (Garnett gave Bonner a high five on his follow through, causing the trajectory of the shot to be higher). Rocket scored the majority of his points on KG, the reigning DPOY, and was often matched up against him on the other end of the floor as well. While Garnett beat Bonner down the floor for a couple of transition dunks, his utter lack of a post up game enabled Ginger to stay within three points of the supposed Superduperstar.

Outside of Bonner, we were led, as usual by Timmeh, who had 23-13-5, like Rocket doing most of his damage in the first half. Though the whole team labored to score in the final 24 minutes (Manu led the way with nine points) the guys deserve a ton of credit for matching Bostons' defensive intensity. It looked like two completely different teams on the floor both ways from the first half to the second. While the first half was far more entertaining to watch, the second half had a true Finals feel to it.

Gino couldn't have started the game more abysmally. Not only did he miss his first shot (a three point clank, usually a portent of doom), but he also had three horrific turnovers in his first five or six touches. Really, if Pop yanked him then and there, I couldn't have argued the decision. Manu did eventually get his shit together though, and he overcame his sloppy start to hit six of his next seven shots (with the only miss in the stretch more of a strip than a block, IMHO) while also doing his best to keep up with Rayneesha through the myriad of screens the Celtics set for him or bodying up with the beefy PP on his postups (he had a lot more success with Pierce than Allen, believe it or not). Ginobili played really well the middle two quarters, but didn't contribute much in the fourth until his late steal on Allen's inbound attempt and making the four subsequent clutch freebies.

The guy who really saved our bacon in that fourth quarter was young George Hill. Like Mason, he didn't play at all intelligently, taking forever to get the team into their sets, dribbling out the shot clock and not forcing Boston's defense into any difficulties, but he hit two contested jumpers anyway and at least his length bothered Rajon Rondo (six points, 16 assists) more than Tony could. Really, Hill made the case to be the guy out there at the end instead of Mace, but like a lot of Pop's gut decisions this past decade, things worked out.

That Mason got the chance to win the game at all was in part due to another patented KG gag job. With Boston up one and less than thirty seconds to go, he got the ball on the move at the free throw line and had only the mobility-challenged Bonner in his way. Instead of trying to maneuver around Rocket for a lay-up or at least a certain foul, he settled for another jumper. Mace got the board, worked his way up the floor, and the rest, as they say, was history. Allen's butter fingers at the end (I'm guessing it was from excessive moisturizer, with aloe and cocoa butter) was the icing on the cake.

With the Celtics win in our back pocket, we can officially put to bed the controversy over Pop resting the big three against the Moonmen. I think the most optimistic of us would've had the Spurs at 2-1 three games into the Rodeo Road Trip and at 2-1 we are. I suppose this latest Boston win has opened up some eyes around the league and now the big name analysts are once again conceding that if anyone will impede the runaway locomotive that is the Lakers, it will be us. The next challenge will be for the guys to put this last game behind them and be just as up for a lesser opponent. It'd be nice of Parker to rebound from his crummy game as well and I'm fully confident that he will.

After all, it's not like New Jersey has anyone who's historically given Tony trouble or anything.