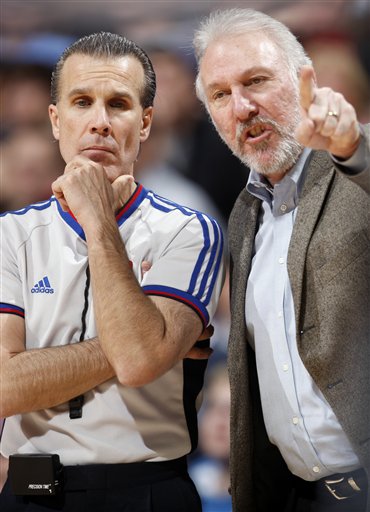 Pop: Gee whiz Kenny, what the fuck do I have to say to get ejected so I can take the night off too? How about if I tell you I did your wife? You see me pointing to her in the stands? Yeah, I'm totally boning her. She can't get enough of this beard. There, will that do it? Can I go to my room now?

Ken Mauer: Well if I eject you, wouldn't you just go sleep with her again while I'm stuck here reffing this stupid game? Screw you, Pop, you're stuck here.

I'm going to put as much effort into recapping the game as Tim, Manu, Tony, Fin, and most importantly, Pop put in to win it.

And I will do so in the Japanese form of Haiku:

Made smartass comments to press

There, I'm done. That was your recap. And if any of you bastards call me lazy, just remember that I'm at least as vital to your enjoyment of the Spurs as Findog is (if not more so) and if he can take the game off, then so can I.

However, just so I won't completely waste your time, here's something I call

We're going to choose both rosters strictly by using PER.

First here are the actual rosters:

East Starters: Overall PER Conf. PER Rank by Position

One of these is not like the other. By my count Iverson is the 22nd ranked guard in the Eastern conference in PER. Unfortunately fans vote for starters. At least they got four out of five right, sort of (will explain below).

The East is calling Bosh a center to suit their roster needs. He deserves to be on the team, but not at a position he doesn't truly play. There is as another bigman East of the Mississippi who belongs in Phoenix.That issue aside, there are three glaring mistakes on the East bench. Toss in AI and four of the twelve "Stars" are frauds.

As with Iverson the voters chose one guy in the starting lineup who doesn't belong but they got the other four right.

Only one glaring error here, though Billups also is getting by more on reputation than merit. The guy has struggled to shoot above 40% his whole career and has made his living by being fortunate enough to be playing with other talented players.

Harris, who has been a revelation in New Jersey, has made a mockery of his trade for Jason Kidd and is more of a true point guard than AI anyway. The East could use his pressuring defense on Paul to take away his lobs and pick-and-rolls to the West's many dominating bigs. Bosh is a power forward and he, unlike Garnett, is his team's main option.

It's not Jamison's fault the rest of his team is beat up and awful; he's having the 2nd best season of his career and has had more consistent performances than Pierce or Lewis, both of whom can afford to have off-games playing with so many talented teammates. Ilgouskas has always been a quality player and gives whiny Cleveland fans a second Cav on the roster. Calderon is shooting 50% from the field, 45% from three and has missed only one FT the whole year, while continuing to keep his assists-to-turnover ratio at an elite level for a Toronto team short on swingmen. Carter's outperformed Johnson and Boston's Ray Allen and seems to have embraced a leadership role in NJ away from Kidd's shadow. With Nelson hurt for the rest of the year, Rondo gives the Celtics a truly deserving second player and he's been their only indispensable guy all season long.

Carlos Boozer has the 2nd highest PER among Western forwards, but he's barely played and still injured. Dirk therefore takes his spot as the next highest guy and he's more of a small forward than Amare anyway.

Jefferson is a far, far better player than David West and we can't use the "he doesn't play defense" excuse to exclude him because neither does West. It's really a joke he made the squad over so many more deserving forwards. Speaking of defensive liabilities, Amare gets in as the injury replacement for Boozer. I despite The Big Mumble, but he has had a pretty good year for his age and deserves his spot (man, all these guys suck out loud defensively). Roy has made "the leap" this year as Simmons would put it and his spot is secure. Tony's been the second best Western point guard all season so no complaints there. Finally, we gotta give Manu some love and let him sneak in as the 5th guard, for three reasons: A) He got hosed last year B) Billups wasn't even in the Western Conference the whole season and hasn't even been as good as Jason freakin' Terry and C) Manu's way more entertaining and unpredictable than Billups.

Seriously, name one memorable Billups play in his whole career. What exciting thing is he gonna do in Phoenix, make some three pointer? Oooh, I never saw that before. Manu might try to complete a pass through the entire Eastern front line, he might try to cram one on LeBron's head, he might swat Herp Wade again just to show the first one wasn't a fluke, or he might even take a charge. Imagine if he took a charge on like KG. The Big Ticket would go ballistic, and flip out. He'd scream, "I HATE THAT MOTHERFUCKER!!!" to the refs, who in turn would have to decide whether to "T" him up or not. Now that'd be an All-Star game I'd like to watch.