Are the clouds parting for our Spurs or is the calm before another storm?

Share All sharing options for: Are the clouds parting for our Spurs or is the calm before another storm?

Cheers from South London! I had a lovely meal of bangers & mash at the pub last night and me and the lads took in the derby on the telly with the Blues and the Spurs over a few pints of Guinness and I couldn't believe my eyes how shoddy Tottenham's backline was let me tell you. They were bullocks, the lot of them, disorganized, and that French ponce Anelka had 'em all in sixes and sevens on the pitch the whole match. And if that wasn't bad enough those bloody sausages did a number on me and I was feeling dodgy all night. I missed the final 15 minutes in the loo and not only did I miss the last goal but my lads told me a world class bird took off her shirt and knickers and flashed 'em all she was so mad. Oy! Bloody hell!

Alright, alright. Sorry, that was awful. I just wanted to get it out of my system. I'm not in England. It just god damn feels like it because it's been raining in my neck of the woods almost non-stop for the past month, and I'm not at all happy about it. I know, I know, none of you are feeling sorry for me. You're all thinking, "Aw, poor California wuss can't handle a little rain, wah..."

Listen here, you unfeeling jerks! We Californian's pay three times the rent for our crappy apartments and houses for a god damn reason! It's not for the restaurants. It's not for the "cultural diversity." It's not for our liberal, progressive outlook on life. It's for one reason, and one reason only - the weather. Specifically, the lack thereof. We want it to be between 65 and 85 degrees every single day. Not too hot, not too cold. Just perfect, dome-like weather but with actual sunlight and circulating oxygen and stuff.

See when it rains where you live, you don't think much of it. You think, "Huh, that sucks, I guess I'll wear a sweater and and bring an umbrella" and you go about your day.

For us though, it's a lot more serious. It's not just a rainstorm. It's GOD RENEGING ON HIS CONTRACT WITH US. YOU BROKE YOUR PROMISE FLYING SPAGHETTI MONSTER!!! YOU BETRAYED US! I DON'T PAY $1,000 FOR A STUDIO BECAUSE OF THE INDIAN TAKEOUT PLACE ACROSS THE STREET!!!

Plus people here drive like goat ass when it rains. Everyone is scared shitless. If every company wasn't hemorrhaging money these days they'd probably tell their employees to stay home until this lethal, dangerous display of FSM's wrath goes away. I'm contemplating robbing a bank, actively weighing the pros and cons. (Pro: I like money. Con: I know nothing about how bank security works.)

So yes, I'm in a crummy mood. I wrote about soccer at the top not just because I wanted to sound like a Londoner but because it doesn't appear I'll get the chance to do it in a professional capacity anytime soon. My paper decided not to cover the San Jose Earthquakes this year. And that, combined with the fact that they haven't given me a story in weeks and have turned down everything I've pitched, makes me think (oh that shrewd business mind of mine) that I'm no longer wanted there. Thanks, recession! Time to go job hunting.

Also, my girlfriend is an alcoholic psychopath and my favorite athlete is injured for the next three weeks. Life is fantastic!

At least the Spurs have won their past two games, so you know, I've got that going for me. 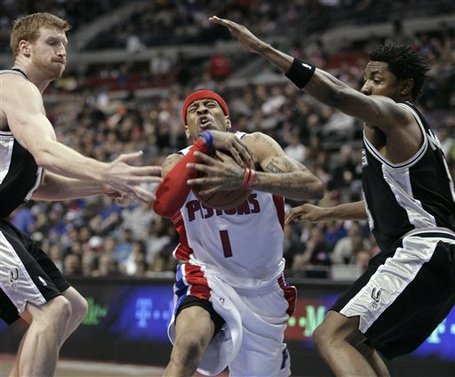 Taking on double teams with your eyes closed is no way to score efficiently, even if it's just Rocket and Mace guarding you.

Most games you watch, they're just entertainment, and win or lose, the teams and individual players generally perform according to your to your expectations, with few exceptions. Then there comes along the rare game where you actually learn something, I mean, really learn something. And even if it's some obvious conclusion that a billion other people already reached and wrote about ad nauseam, you don't truly understand until you see it with your own eyes.

Here's a sad admission for a basketball blogger: I don't watch very much basketball at all. If the Spurs aren't involved, I might watch ten NBA regular season games all year, beginning to end. Mostly, even if a game is on, I'm not paying attention. It's background noise basically. I just can't focus without the emotional attachment on the outcome. Maybe if I was independently wealthy and had all this free time I could watch more games. I'd make it a goal to "scout" any matchups involving the top dozen or so interesting teams out there in the league. These days though I only have time for the Spurs, and just barely so.

I tell you all this because it took this game for me to have my "come to Jesus" moment of clairity with Allen Iverson. I've been pissing into the wind defending the guy, rationalizing all of his shortcomings as a player and teammate, and even (embarrassingly) espousing the opinion that he could totally make things work in Detroit, if only "they'd use him the right way."

God, I'm such a simpleton sometimes. I am finally ready to admit what has been plainly clear to others for years and should've been to me as well: Iverson is finished as a useful basketball player and has probably done more harm than good to his teams in the past half-dozen years. He has been an unqualified disaster in Detroit, wasn't a whole lot better in Denver, and outside of maybe making an impact at the gate, I can't fathom why any NBA general manager would sign him this offseason after the Pistons jettison him.

For so long I saw the guy's box scores, his gaudy 42 point, 9 assist games, and thought to myself, "How come people hate this guy as a player?" Yeah, he plays poor defense, but so does Steve Nash. Yeah he shoots 41% or whatever, but so do Billups and Kidd and nobody gives them any guff. I thought the Iverson criticism was prejudiced, based more on his attitude and tats than his game. I was too dumb to understand that a guy who shoots 41% on 30 shots hurts his team a lot more than a guy who shoots 39% on 15 shots. Those 15 shots Billups and Kidd are passing up, they're getting the ball to guys who are more efficient. As poorly as they shoot, they're only taking the shots the offense dictates for them to take as opposed to shooting whenever the heck they feel like it, like Iverson does.

I thought Iverson's curse all along was playing with crappy players when now I understand he's the guy who makes them crappy. He's the anti-Manu. Whoever he plays with just automatically gets worse. No one ever gets the ball as much as they should, they never know when it's coming, and the chore of having to constantly cover and compensate for Iverson on defense must be physically and psychologically taxing as well. It's no wonder Denver's improved with Billups and Detroit's become a joke. With Iverson aboard Wallace, Hamilton, Prince have all seen their PERs drop ('Sheed, at his age, you can understand, but the latter two are in their primes).

Against the weakened and fatigued road-weary Spurs not only did Iverson have another statistically misleading mediocre game (31 points on 28 shots, wheee!), but he routinely ignored open teammates, turning everyone in a Pistons jersey into innocent bystanders in the second half. Also, he got to do it for 45 minutes as his rookie coach Michael Curry (whom I'm guessing isn't long for the job) botched the game spectacularly. He only played seven players, reasoning that with several off days coming up, he could afford to ride his top guys. The problem is that his top guys are all graybeards like the Spurs, and that kind of thinking plays right into Pop's hands. Young, fast, bouncy energetic guys give us trouble, not old guys who can't run or jump anymore. How somebody like Amir Johnson or Arron Afflalo doesn't get any playing time against us is insane. That'd be like the Mavs not playing Brandon Bass or the Lakers not using Jordan Farmar. Maybe Curry sensed he was overmatched in his personal matchup against Pop and just wanted to have his veterans on the floor at all times, so he'd have to do as little "coaching" as possible.

Who knows? Whatever his reasons were, the strategy misfired and the Spurs escaped Detroit with a win. I'd like to say that this game was the beginning of something grand, the start of our glorious defensive resurgence, but the odds are, more likely than not, the Pistons - and specifically Iverson - had more to do with their offensive ineptitude than anything we did. Sure, I did notice a bump in our intensity, particularly in the fourth, but until it happens for a few quarters in a row let alone a few games, it doesn't signify anything meaningful.

I thought both Timmy and Tony played pretty well overall. Neither shot well, but Tim was a monster on the boards and more aggressive defensively than usual. Tony had an excellent floor game with eleven dimes and even had a few moments of attentiveness in his own end. Besides them Rocket stuck five threes, Kurt and George Hill competed real well when they were in there and Bruce helped cool down AI late when we needed him to. A good team win on the road for a team that desperately needed some good news after a rough week.

It's about damn time, Spurs. I was thinking of giving up and joining a soccer blog.

The Washington Wizards: They'll let anyone get layups.

I'd like to say something clever or meaningful about this game, but why start doing that now after three and a half years of rambling incoherent nonsense?

Nearly everyone played well. Mason had an eventful homecoming with 25 points, Finley checked in with his one non-sucky game of the month (timely!), and George, Fab, Kurt and even Fatality had strong performances from the bench. Of course the utter wretchedness of the Wiz prevents us from taking too much pleasure in the win, but after losing to the Raps and the Knicks, it's a relief, gratifying even, to watch us kick someone's - anyone's - butts.

Regardless of the opponent, that's now two exceptional defensive performances in a row - Washington never scored more than 20 in any quarter - and it's a hell of a way to close out the Rodeo Road Trip. Unlike the Pistons game, we didn't miss Manu at all (you get the sense this would've been one of those 20 minute, 3-for-6, 10 point, 3 rebound, 2 assist nights against a lesser opponent on the road when he knows he can take it easy) and it bought us another two days for him to recover without costing us in the standings.

I'm looking forward to the Mavs game on Tuesday; it's always better to play somebody you hate, after all, and it should be a good test for our (hopefully) renewed commitment to defense. Dirk always gives us problems, and there still doesn't seem to be anyone on the roster who can guard him, but they don't really have anyone who can guard Tim or Tony either. Ginobili's always been the guy who's gotten us over the hump (or not) against these guys in the past, so it should be an interesting test for Mason, Bonner and Hill, as well as Kurt and Bruce.

Still... no Manu. Dammit all. Talk about being stuck under a dark cloud.