The Spurs won a game tonight, despite suffering from a bit of suckitude. Annoying, but I think most of us will take the win at this point. Oh, and somebody we've been looking for finally decided to show up. 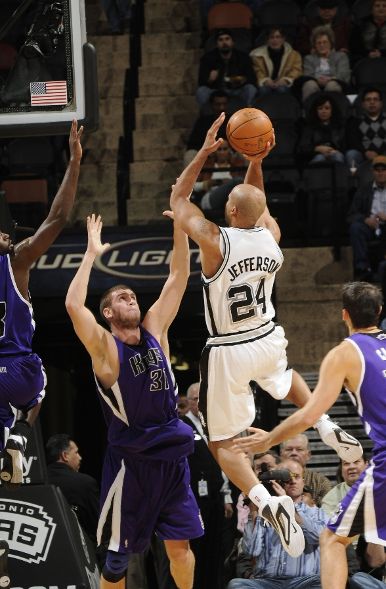 Damn, those are some tiny ears.

That's right, Richard Jefferson, Mr. Big Offseason Acquisition, got going early in this game by playing above the rim, and he shot the ball very well for us. This, of course, opened things up for everyone else when the Kings got scared of RJ taking it to the rim. The Big 4 was in full effect tonight... on offense.

Now, I'll admit to not being able to watch most of this game, so take my "analysis" with a grain of salt. But, here are my observations:

The Spurs' offense fired on all cylinders tonight, and turnovers were limited compared to the previous 4 contests. Only 3 Spurs shot less than 50% from the field: Tim Duncan, Manu Ginobili and Dejuan Blair. When those 3 guys aren't having to do all the heavy lifting, it's a beautiful thing. What that also tells me is that our designated shooters were kicking some ass. Now, let's see a graphical representation: 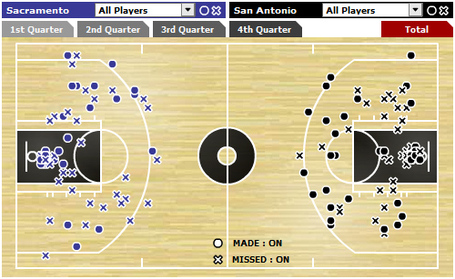 Surprisingly, the Spurs shot well on mid-range jumpers. A few of those are from the usual suspects(Tony, Dice), but quite a few of those dots in the 10-20 foot range are from RJ. That might seem disappointing at first, but it's the most encouraging thing I've seen all year from RJ. For his career, he has a deadly jumper - and if his J has returned to form, it will force opposing defenses to respect it, giving him more opportunities to drive to the rim. Let's hope Richard's jumper is really back, because that would open up the offense tremendously for us. Not only for him, but for Tony and Manu as well, since teams have been giving RJ space on the outside in order to protect the paint. RJ finished with 23 points, 8 rebounds, and 3 assists. Oddly, he didn't take a single free throw in this game, despite his early aggressiveness. I also could have done without the 4 turnovers, but I'll take the offense.

And what of Manu Ginobili? Sure, Manu was one of the guys who shot less than 50%(5-11), but he did what Manu does: making great plays when it counts. Manu scored 10 of his 20 points in the fourth quarter, made the right passes, and came up with a couple of steals. Oh, and 8-8 from the free throw line ain't bad either. Manu makes this team so much better when he's doing his thing.

The other 2 members of the Big 4(tonight, it really was 4) both had good nights on the offensive end as well. Tony shot very well, and added 11 assists for his most complete game of the season. Limiting himself to 2 turnovers also tells us that he was making good decisions, just in case the assist total wasn't convincing enough. He led the team in +/- as well, with a +25. Timmy had a less obviously good performance, but he gets a pass since he's been carrying the team for most of the early part of the season. Tim shot 7-15 for 17 points, adding 8 rebounds and 4 assists for good measure. He also had 0 turnovers, for a very efficient game on offense(corrected turnover figure from earlier).

While the Spurs did a great job on offense, the defense was... terrible. The Kings shot 52.3% for the game. Six Kings players scored in double figures, led by 20 points on 9-14 shooting from backup SF Omri Casspi. The Kings moved the ball extremely well, but there's no excuse for the kind of lazy defense I witnessed in the few minutes I was able to watch. The bad thing is, there's not one Spur that can be singled out for this, it was a lack of effort on the team level. Where Casspi was hitting jump shots, any number of other Kings were getting to the rim almost at will. This is disturbing, especially when you consider the defensive "performance" against Utah in the previous game.

It's hard to figure out what happened to the Spurs' defense. After the game against Toronto, they were playing good D for a long stretch of games, but in the last 2-3 games, it's all gone to hell. Letting the Kings shoot over 50%(The KINGS, ffs) is completely unacceptable for a team that has championship aspirations.