Share All sharing options for: Game Preview # 17: Attack of the Moonmen (Nuggets @ Spurs)

Well, that was an ugly loss last night, huh? I realize a lot of folks might be a little down after that, but I was nothing but encouraged by how the Spurs managed to not only stay in the game, but fight back a nd put the result into question despite all the miscues and misses. The best team in the East should have been able to put us away with all the mistakes and missed shots... but they didn't. And the BAM unit once again showed its mettle in making the vaunted Boston bench look pretty silly.

Tonight, we get another game against a team that many consider a contender, but this team is almost the polar opposite of Boston. Denver's been playing some really good ball, despite that loss to Minnesota last weekend, but their strength comes in the form of the second most efficient offense in the league. Their defense is in the middle of the pack, but still improved over last season. Our defense is slightly better than theirs overall, and our offense slightly worse. But, the Moonmen have a bit of a cushion in their division race already, and don't need this game as badly as the Spurs do. So, expect the Spurs to come out swinging in this one.

In the past, the Spurs have had the Nuggets' number. In fact, a first-round series against Denver used to be a good indicator of a forthcoming Championship run. Then they traded for Allen Iverson for Chauncey Billups. Nowadays, these two teams are somewhat more evenly matched in the starting units, which means the role players really have to step up. And this is where the Spurs might just have the edge.

As we all know by now, everyone's favorite rookie(even Hollinger's) has had 2 great games in a row. Against the Sixers, it would have been easy to chalk it up to their relative lack of size in the front court. But against the Celtics, it becomes a lot harder to dismiss an 18 point, 11 rebound performance in 22 minutes of time. Tonight, he'll go up against a guy who blocks a lot of shots, but is otherwise pretty tame. It's OK, because every time Dejuan gets blocked, he gets the rebound and goes back up until he scores. The Birdman hasn't seen anything like The Beast before, and I think it might already be in his head. 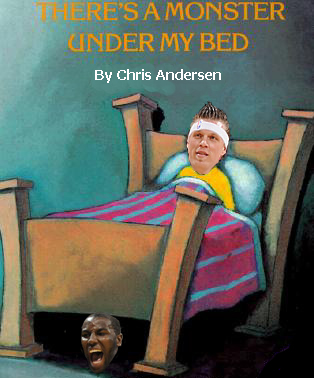 OK, maybe I just wanted an excuse to post that chop again, but one couldn't blame Andersen if he really is scared of The Beast.