PtR Quick Cap: Spurs set off fireworks in 108-78 blasting of the Heat

Share All sharing options for: PtR Quick Cap: Spurs set off fireworks in 108-78 blasting of the Heat 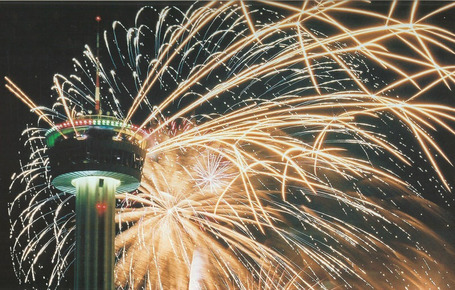 What a way to end 2009 and kick off the New Year, eh? The Spurs brought the fireworks tonight, blasted all of it in a huge second half salvo, and just like that, one more victory over an above-.500 team. Jump in and savor the sweet smell of the Spurs' largest win (by scoring margin) of the season.

I'll make this real quick since I got a New Year's reunion to go to, which I actually hate going to because it's just crappy. Anyway, I'll be thinking about the win and wearing a big smile on my face even if I have to see some of my not so spectacular relatives. Here's a song, by the way: 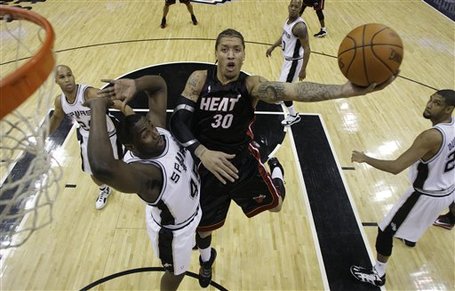 The first quarter was pretty much all-offense and minimal defense from both teams. Michael Beasley started out hot, going after DeJuan Blair in the first few possessions and scoring at will over Numbah 45 with an assortment of short jumpers and drives to the hoop. The Spurs countered with a proper dose of Tim Duncan's inside brilliance and Tony Parker's aggressiveness, which has been a very comforting sight in the last few games.

TP has been taking it to the hole a lot more, and he did it again in this game where I think he only shot 3 jumpers. The rest, he was on attack mode and making his layups and teardrops while dishing out 9 assists (he even assisted Manu on one basket, huzzah!).

In the second quarter, it turned into the BAM show starring none other than the magic man himself, Manu Ginobili. Marv Albert and Mike Fratello kept on raving about Manu starting to get his groove on, returning to his old self, and I couldn't agree more. He scored on a crazy layup attempt where he blew past his man, drew two defenders into the air, had to change his shot to his right hand, flipped it up and in. Just incredible stuff. Thank the NBA video guys for saving that highlight for us:

Defensively, we let Miami take a lot of jumpshots, but for the half, it was mostly from close range which they easily made. We did, however, a great job of contesting a lot of the Heat's attempts without fouling, allowing the usually referee-friendly Heat team just 4 free throws. On our end, we had 12 attempts at the half, showing just how aggressive the team was in challenging the Heat big men inside. Manu also wreaked havoc on defense, getting the usual deflections and stripping the ball off unsuspecting opponents. Rage, too, despite the sucky boxscore stats, played pretty ably on defense, even blocking a Beasley attempt and took on the chores of limitng the Beaze in the second half.

In his interview at the half, The Sickness talked about the team's strategy of blitzing Dwyane Wade whenever he touched the ball, which worked effectively in limiting The Flash to shooting mostly contested jumpers. Throughout the game, you'll notice D-Wade jumping to make his move and at the last minute, a Spur or two or three are meeting him at the rim, forcing him to pass out to a teammate who's quickly rotated to and picked up by another Spur. Heck, we even changed Wade's jumpshots and forced him to bail out in mid-shot. The team defense was great in helping out Keith Bogans, who also accounted for himself pretty well, capably bodying up one of the best shooting guards in the league.

Have some first half highlights:

Second Half Blast Off 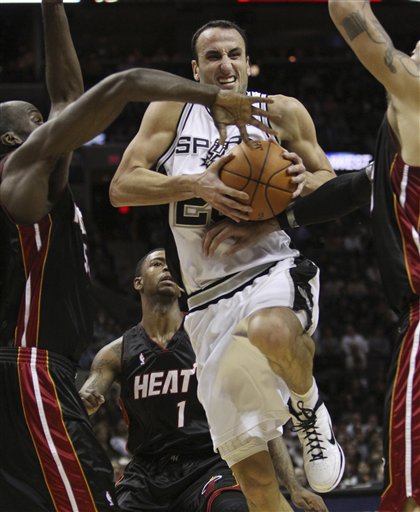 The Spurs had one heck of a third quarter, and the Heat was pretty much FUBAR after that. On defense, there was a period where we forced four consecutive TOs out of the Heat, and had me thinking, "Wait, are we sure this isn't the Spurs that are turning the ball over instead?" It didn't help that Miami was bricking a lot of shots, led by Wade who went 1-5 on threes. Tim C. said in the preview Wade's bad at threes but still keeps on taking them, so good call there.

Also, bones mentioned in the game thread that we'll adjust to the open jumpers, and he was spot on, too. Hands were on the Heat players' faces every time they took a shot, and the free throw and foul call disparity wasn't much of a homecooking thing, really, but more of a defense thing. The Spurs forced a tired Heat team coming off a tough loss a night ago to long jumpers, and that was the ball game right there.

With eight minutes to go in the fourth, we got another chance to see extended playing time for the bench, where Haislip battled with fellow tattoo-ined player and maybe future coke-snorting buddy (okay, I kid, I kid) Michael Beasley, Malik Hairston executed a strange, head-first drive and barreled out of control, and Theo Ratliff almost maimed Mario Chalmers. But overall, they padded on to the lead with Georgy Stud Hill and Roger Mason, Jr. leading the way. Hill orchestrated the offense with a bunch of end-of-the-bench players really well, and Mase hit Js all over, even hitting something from waaay beyond the arc (28 feet according to alamobro).

What To Make Of This Win

But first, here's a nifty falling-down pass from Timmeh to DeJuan. You almost stomped on the Great Timmy, you dumb rook! Okay, just kidding, I'm just really happy. Seriously, I am!

So we finally beat a winning team, right? It's all good, and it's a welcome sight to see the offense becoming more and more in tune to the Spurs' way - better ball movement (the 19 TOs was pretty much padded in garbage time), spacing, and confounding inside-outside attack.

But still, this was a Miami team on a SEGABABA, and tired from a narrow loss to the Scrappy Doo Hornets. They were a little too timid out there, as evidenced by Wade looking tired and not being really creative in his drives like he normally does. Kudos to our perimeter guys, too, for making life hard for the superstar guard out there. I'm going to go out on a limb here and say Bogans gets to keep his starting job after this one.

Pop also worked a lot of small ball in this game, even going with a Blair at center and RJ at power forward lineup at one point, with Manu, George and Mase flanking them. It works great for small teams like the Heat, and we were really able to push the tempo with it.

We also limited a not really that offensively talented Heat team to 78 points, and sent a nice message with the 30-point beatdown. The team assisted on 69% of its attempts, and also shot a very un-Spur-like 91% on free throws (20-22) despite making only four threes. Oh yeah, we also owned the boards, 43-28.

Overall, the team just really played a lot of good basketball for four quarters, and the result pretty much speaks for itself. Also, for those watching the game, we got treated to another Classic PopTM at the end of the third quarter, where Craig Sager got Sager'ed with this line: (thanks to the little O for the fairly accurate translation)

Sager: Okay Pop, that quarter you managed to keep the Heat to only score 13 points, seven turnovers, and only 5 field goals. What happened?

Pop: I think they were looking at your suit

Sager was wearing a really odd-looking all-black tuxedo, or was it a suit? I'll call it a suxedo, maybe. Really crazy man, that Craig. I wish I had a photo of him wearing it so I can share the laughter.

He's just really settling into a groove right now, starting to get a good grasp of his teammates' capabilities while knowing when to take his shots. 7-12 shooting for 15 points, but the 9 assists were the story right here, with only two turnovers.

It's been said many times over and beaten like a dead horse, but he's truly a joy to watch. The behind-the-back dribbles, stepback jumpers, daredevil drives and slick passes were again in full effect, even with only 24 minutes of playing time. A stat-stuffing 18 points, 4 rebounds, 4 assists and 4 steals to cap off another awesome performance.

I love the player who makes you go "Whoa" when looking at the boxscore after the final buzzer sounds. Timmy D always does that to me, and he's my hero for it. A "quiet" 23 points (seriously... how did he get that many points without us noticing?), 10 rebounds, 3 assists and 2 steals plus one excellent assist to Blair. The New Year goddess is hopefully smiling upon this team right now.

That's it, I'm off to the crappy family reunion. Happy New Year, everyone!