Partying With The Toros

Share All sharing options for: Partying With The Toros

I've attended the first four Toros' games of the season now. Three as a media man and one as a paying customer as part of PtR night. I'm here to give you a quick run down.

They sit at 2-2 after splitting a pair of back-to-back series with the Rio Grande Valley Vipers and the Tulsa 66ers. The closest thing I can give you to describe their style of play is early 90's Big Ten basketball. I might even call them a Purdue type team. A slow paced and deliberate half court offense that works a lot of the shot clock. Rugged on the interior where you don't really want to play with them unless you came to bang. A little undersized. One efficient, yet unspectacular, point guard who manages to control the game and play within himself. One go to scorer who can light it up when on, but who doesn't have a well enough rounded game to score all the time. One streaky shooter from the outside. One big bruiser in the middle. A handful of tough role players who always seem to make plays but never seem to put up stats.

They are all that with more skill. In an offhand remark after the third game, Coach Snyder asked rhetorically. "They're good aren't they?" I couldn't help but say yes. These guys are a very good team and if you like watching teams play "the right way", then this is your team to watch.

Arena? Gym? Court? It's hard what to call it. It seats about 2200 people and it is in the Austin Convention Center. Attendance was reasonable for the two weekend games, but pretty light for the weekday games against the Tulsa team.

There isn't a bad seat in the house though and they aren't really against moving around. In fact, they don't have seat ushers and as long as you don't try to sit on the court you can pretty much sit wherever. Lauri chooses to sit almost near the top because she likes the view. In other words, it's all good.

Like most sporting events, the time outs are filled with various events. Dance offs, races, half court shots, etc. Yes, as always, it is pretty loud and the music is, well, not my style. To quote Jim Carrey, "Would it kill you to play a little Foghat?" Ah, yes. Slow Ride.

They have a full bar at the games. Beer -- my choice was Dos XX, cocktails, margaritas. Additionally, the Toros games have something else you don't find at every game. The beer geyser 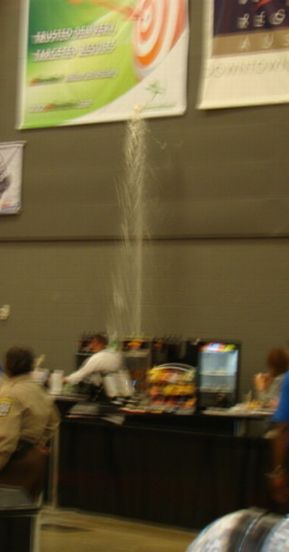 Well, PtR Night with the Toros wasn't the biggest success. There were five of us: me, Mrs ATS, Lauri, JanieAnnie, and PtrUser. Ptruser even came up from San Antonio and is the source of these pictures.

We had great seats though as we were all in the second row. Unfortunately, the team lost to the Joey Dorsey led Vipers. Joey had 18 rebounds in the game. 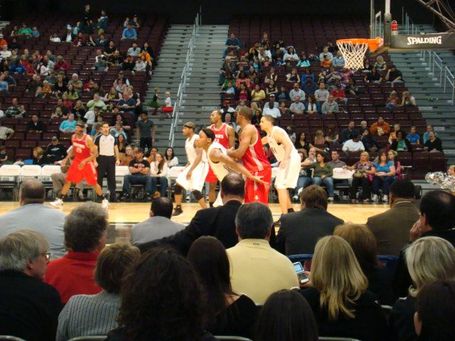 We were second row in the stands. They have some floor seats right behind the other teams bench. That's pretty much where I sit when I'm in press row, but center court. Because you sit below the level of the court, it feels a little too low for me.

The Roster and The Management

Last night, I had the opportunity to chat with Joanna Shapiro who is the D-League PR Director. She was in town as part of her 10 cities and 10 nights tour. Lucky her. She ran me through the ins and outs of rosters. As I have mentioned before, the Toros get some players on allocation -- which means they have local interest to the market, or returning players -- like Dwayne Jones who played for them last year. Those guys get assigned first. Everybody else goes into the player pool. The draft takes place at teams select guys from the player pool. ALL players sign contracts with the D-League, not with the teams. So all the above groups of players come from the D-League signing guys to one year contracts. I feel pretty confident in saying the Curtis Jerrells was in Spurs camp because the front office knew he would be going to the D-League, knew he was from Austin, and had every intention as claiming him as an allocation player.

Their is a 10 D-League roster limit and a 12 player cap. They can only have 10 D-League guys on the roster, but can go up to 12 with affiliated players.

Then there are free agents. Any team can pick a player from the player pool. The player pool guys enter the pool via waivers. Teams can select players off the waiver wire. The order of selection is the reverse order of the draft. Once you claim a player off waivers, you go to the bottom of the list. If a player clears waivers, a 48-hour time frame, then anybody can select them out of the pool. 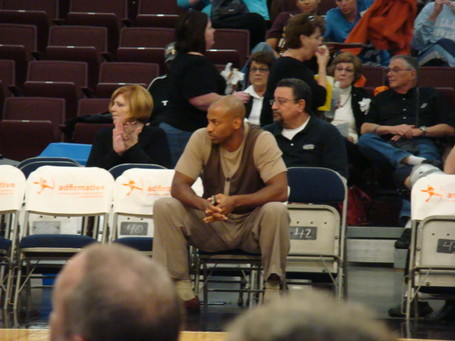