The Spurs' Slow Start, By The Numbers

Share All sharing options for: The Spurs' Slow Start, By The Numbers

Something's wrong with the Spurs, but it's hard to pinpoint exactly what the problem is. But, there's a ton of information out there on the internets, which can be used by hack writers like myself to look into it a little bit deeper. Especially when that writer is bored out of his mind on Christmas Day. That being the case, I decided to bury myself in stats and pass on the impressions garnered from digging through them to my PtR family.

Lucky you, he said sarcastically.

This team was [rightly] expected to be a powerhouse when it comes to generating offense, and their performance on that end has been a bit disheartening. Yes, they currently have the fifth most efficient offense in the league, but they could still do a lot of things better.

Let's check out the numbers.

One principle for having a good offense is balance, meaning that the scoring is not tilted too much in favor of the big men or guards. That means that if 60% of your offense is from the guards and wings, with the remaining 40% from the big men, you've struck the perfect balance. So how are we doing there? Let's ask basketball-reference.com. 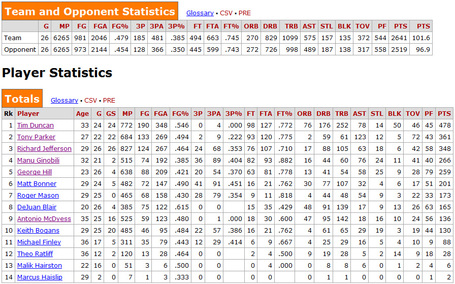 These guys have scored a grand total of 1631 points between them this season. That's 61.8% of the Spurs' total points for the season.

This is actually a better result than I expected to find, so there's not much problem from a positional standpoint. However, Duncan has scored nearly half of those frontcourt points by himself, so a bit more output from McDyess and/or Blair would definitely be a good thing, and bring us even closer to that perfect balance, especially since most of us are expecting Manu to get his shooting on track at some point. Also, we can't expect Bonner's career year to continue once he returns from his injury. The counter argument here, of course, is Pop's love of smallball, which probably skews the numbers somewhat in favor of the perimeter players.

Another way to look at it is to break it down even further to stats by position. For that, we could check 82games.com. However, with Pop's crazy lineups, multiple players will play more than one position in a single game, so I don't know how they calculate those stats, but I'd imagine they don't adjust for the fact that Jefferson almost always spends a little time at PF, for example. We're going to be using that chart a lot more, though.

Remember that positional offensive production chart we linked a bit further above from 82games? Let's put a copy of it here for better visual reference on the next set of numbers we're looking at. 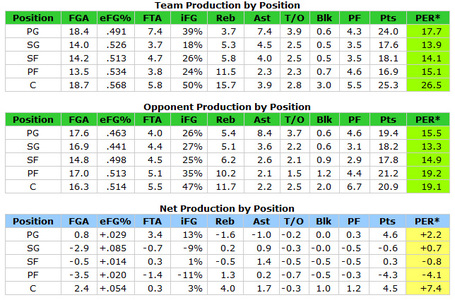 The first thing that jumps out from this chart is the fact that the inside field goal percentage(iFG%) is disturbingly low at both the SG and PF positions. I'm sure that our two jumpshooting power forwards(Bonner and Dice) skew the results of this somewhat, and helps to solidify the argument for Blair getting more minutes. When not even one-fourth of the shots by your power forwards are being taken close to the rim, it's not usually a good sign. And not even one-fifth of the shots from our off guards are from close range. In both cases, this would seem to be a huge disadvantage.

However, our power forwards also have an effective field goal percentage(eFG%)* of 53.4%, which is only beaten by the guys who play C. The eFG% also works in favor of the shooting guards, putting them well over 50% due to the number of 3's they attempt. If when Manu gets back to being himself(which can't happen soon enough), I would expect both the iFG% and eFG% for the shooting guard position to improve - when he's on, he's just that good. And when he starts attacking the rim more from the SG position, we'll rely a lot less on jumpers in the second unit. As is normally the case, Manu is the key to reaching maximum efficiency.

* For those that don't already know, effective field goal percentage is adjusted based on the points collected by each shot. For example, if a player only takes one shot, and that shot is a made 3-point attempt, his eFG% would be 150% - the additional 50% is due to the extra point that particular shot is awarded.

When weighed against the points scored and FGA's by position, this seems to indicate that our PF's are not getting enough looks. They have the second highest scoring efficiency on the team, but get the lowest number of FGA's, and score the least points per game of any position. However, I'm calculating(read: making up) another stat on the spot, in an attempt to figure out why the PF's don't get as many touches as the players at every other position do: turnover rate per field goal attempt(TO / FGA). Once we figure those numbers out, does it provide us any answers?

Nope, that doesn't explain it either. However, this stat is skewed against the guards, who have ball handling duties. What if we add assists to the equation, though? So our new equation looks like this: TO / (FGA + AST)

Now it makes a bit more sense. Our power forwards turn the ball over at the same rate (relative to their playmaking prowess) as our point guards, who have been mercilessly attacked for their turnover-prone ways this season. Not good. The off guards and small forwards aren't doing much better in that department, which probably explains why they are taking a smaller number of shots than the point guards and centers. I should mention that the one guy on this team who's never had trouble adjusting to new teammates is Duncan - just look at that low, low number at center.

So why are the point guards shooting so much? That can probably be attributed to two things: First, as the initiators of the offense, they are more likely to have the ball in late-clock situations, when someone has to take a shot. Second, and more importantly, both of the point guards have the ability to regularly create their own shot, which is a luxury not afforded at those other positions.

Conversely, I wouldn't trust any PF on this team to create his own shot, aside from maybe Blair. But even the Beast has his disadvantages - teams will learn(and some of them already have) to foul him before he can shoot, because his free throw shooting is at an absolutely atrocious 43%.

Team Chemistry and Sharing the Ball

To my mind, the low number of shot attempts from the forwards and off guards, as well as the team-wide turnover plague, has to do with something Fred wrote about the other day: growing pains. Think about it: we have 7 new players on this team, what positions do they play most often? shooting guard(Bogans, who shouldn't be taking a lot of shots anyway), small forward(Jefferson), and power forward(Dice, Blair). These guys haven't been on the team long enough for the vets to instinctively know how to best utilize them, and conversely, they haven't had enough time to learn the "when" and "where" of getting the ball to the Spurs' vets. And, the point guards aren't comfortable enough with these guys to get them the ball in their spots consistently either.

There are enough creators on this team to allow one or two positions to be manned by spot-up shooters, but the plays that the point guards are most comfortable with(remember, they're the ones calling the plays this year on offense) are plays that worked well with last year's personnel. A higher comfort level will lead to better play-calling, which will lead to better ball movement, which will lead to more easy shot opportunities near the rim. With more trial and error, they'll all learn from each other, and the offense will get better. Indeed, they've already moved from a top-10 offense early in the season to a top-5 offense as of today. I wouldn't be surprised if they move up even further to become a top-3 team in offensive efficiency.

One especially encouraging stat to me is this: On the season, 58% of the Spurs' field goals have been assisted. Considering the issues detailed above, that's very, very good. This Spurs' team really has the chance to evolve into an offensive juggernaut, and given time, I think they will.

Expectations for the Spurs' defense are always high, but after all the moves made prior to this season, we knew the defense would be a mystery coming in. The Spurs currently own the 11th most efficient defense in the league, going by points allowed per 100 possessions, and they've been hovering there for quite some time. This team worries me a lot on the defensive end, so let's have a look at the few statistics we have available.

Overall, the Spurs are allowing the 7th-lowest true shooting percentage of any team in the league, which can also be found on that chart linked in the paragraph above. This is not bad, but we want to be in the top 5. So, where can we improve?

I will now call your attention now to this chart, also at hoopdata.com. This shows the shot locations given, number of attempts and FG percentages given up at those locations by all NBA teams. Using this, we can get a picture of how well the Spurs are forcing teams to play a mid-range game, which is the optimum defensive strategy. Unfortunately, it's not adjusted for pace, but it's still a good reference point.

At the rim, the Spurs are sixth in the league at preventing shots, and 4th in field goal percentage defense. Not bad at all.

Further out, the Spurs allow the 5th-most shots from 16-23 feet in the league. But, they are a slightly more respectable 13th in the league at defending those shots.

Finally, the Spurs give up less 3-point attempts per game than any other team, but are in the middle of the pack(16th) when it comes to field-goal percentage defense.

So, surprisingly, the Spurs' interior defense is not the problem here. It's the perimeter defense. It seems that we're getting teams to take shots from inefficient locations on the floor, for the most part, which would be good if we were still challenging them. However, we're definitely not doing enough to challenge those shots. With the number of missed rotations and blown defensive assignments I've seen this season, this fact isn't all that surprising. Better chemistry and communication is going to be required to fix this problem, and I just haven't seen it so far. But, since we're getting them to shoot from the right spots, I'm actually quite pleased with the potential for the Spurs to become a top-5 defensive team. If they start making crisper, better rotations, and challenging jumpers, it'll be a matter of time before they start to climb to their rightful place in the top 5 of the defensive rankings.

We're not a bad defensive team, it just looks that way so far.

A Final Note of Praise

The more stats I dig into, the more I appreciate the "old", "washed up" Tim Duncan. The man's impact goes far beyond the traditional boxscore, as he dominates almost every phase of the game with his intelligence. Our dominance on the interior at both ends of the floor has Timmy's fingerprints all over it.