We're the cat (sorry, Hipuks). They're the dog.

Exclusive insights from our man on the scene after the jump.

Wayne sent the following missive from the pre-game interview with Pop:

Key to the game: Don’t take the injured Blazers lightly.

Pop said he didn’t talk to the team about it. Pop said if they are taking the team lightly, then he would take a time out and, "ask them nicely to pick it up" and go from there.

Other things of interest (even if only to ME).

First, an excellent Christmas decorating effort (that's a dummy hanging from the eaves): 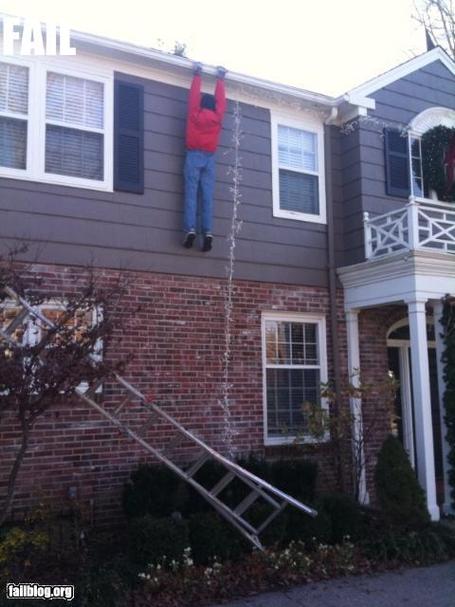 So why is this on failblog? Well, I'll let the decorator tell the story in his own words:

Good news is that I truly out did myself this year with my Christmas decorations. The bad news is that I had to take him down after two days. I had more people come screaming up to my house than ever. Great stories. But two things made me take it down.First, the cops advised me that it would cause traffic accidents as they almost wrecked when they drove by.

Second, a 55 year old lady grabbed the 75 pound ladder almost killed herself putting it against my house and didn’t realize that it was fake until she climbed to the top (she was not happy). By the way, she was one of the many people who attempted to do that. My yard couldn’t take it either. I have more than a few tire tracks where people literally drove up my yard.

Second, I've always wondered what Americans sound like to other people. When people from other countries refer to my American accent, I always beg them to try to describe it to me, and they never quite can. This odd little video of a song written in gibberish deliberately intended to sound like American English may be the closest I ever get to knowing what someone from the U.S. sounds like to a non-English speaker. Or . . . maybe it's just an odd video, period.

Third, bella sent this to me as proof that there IS a Santa. What? That's just something in my eye. Allergies or something. ::turning away; blowing nose::

All right, enough merriment. On with the grim business of basketball: