Before we get the three-game road trip going, here's your weekly dose of massive linkage. I added a little story from yours truly, after the jump. Because you know, we love to go off-topic around these parts.

So. I think I've finally met THE girl. She is a colleague who's been in the company for two years, but somehow we've never talked until Friday night when she had to stay late in the office to finish some stuff. I had dinner with her and another colleague, but when the "third wheel" left, I stayed behind until she finished doing whatever she needed to do.

For about an hour that we were alone together, it was, hmm, how do I say this without coming off as a pathetic, romantic loser... okay, whatever, fuck it, it was MAGIC. So after we parted ways (don't worry, we're a pretty conservative country and don't have sex on the first stare), I went home with this big fat smile on my face and we exchanged a few text messages before going to sleep. I seriously didn't want that day to end.

All good, right? Well... not really, no, it's not good. She already has a boyfriend of three years. Shit. And now I'm here telling my sad story to a bunch of crazy strangers. My friends and I have a funny saying in Filipino, "Ang manok na nakatali, mas madaling hulihin", which, when loosely translated in English, means "The chicken that's tied up is easier to catch (compared to one that's free-roaming)." I kinda believe in karma so I wouldn't even dare do something like that, but just thought I'd say it, so there.

Okay, I'll stop. I need to go see a doctor now. Your links, up ahead.

First up, we got Tim C.'s pick. A relatively new song from Muse.

And for those folks who worry about him, jollyrogerwilco is alive and well and continues to look over us. In fact, this is his update for that darned Lexicon:

Here's a personal favorite of bellasa. It's quite long, but it's pretty cool and definitely epic. Don't forget to check out Part 2 and Part 3.

With so many music contributions, I won't bother with my own. Here's LatinD's pick to top it off.

Peachtree Hoops: Enough is enough, it is time to give the front court force of Morris and Collins a nickname
The SBN Atlanta Hawks blog rejoices after Randolph Morris and Jason Collins finally make a regulation basket after 21 games.

CelticsBlog: Appreciating Good Tony
He's known for his maddeningly low basketball IQ and frequent boneheaded plays. But he's on this basketball team and in the NBA for a reason.

Rufus on Fire: Gerald Wallace Facts
Funny stuff based on Chuck Norris Facts. I believe someone from ST also made a similar one for DeJuan Blair.

Mavs Moneyball: WWE RAW invades the AAC...
Even if it's all just a stunt, Mark Cuban getting smashed through a table is one for the ages.

The Dream Shake: Tracy McGrady's family must be really, really bored
"Who the hell is voting for Tracy McGrady to be in the All-Star game???" -- So... the perpetrators behind votefortheworst.com continues to invade the NBA. T-Mac is trying to pull a Bruce Bowen in this season's all-star game. Bruce narrowly made it, so good luck, Tracy.

Indy Cornrows: Starters Continue To Get Outplayed, Outscored During Losing Streak
"In the six-game losing streak, which increased last night after a 102-91 loss to the Blazers, the starters have been outscored 443-314, an average deficit of 21.5 per game." - the East's version of our BAM?

Clips Nation: Baron Davis After 20 Games
"I've liked Baron's game this year. He's laying off the pull-up-jumper and laying off the three-ball in general. This is good. He seems to be often attacking the basket and getting into the lane, using his considerable size and strength to overpower smaller guards."

Silver Screen and Roll: Lakers' "On/Off" switch apparently controls a Supernova
First it was only Dirk, now it's the entire Lakers team that has a Supernova mode? Not fair.

Canis Hoopus: Gates of Hell
"Can the woeful Timberwolves withstand poor gate receipts and finish their major rebuilding? Minnesota hopes to become a 'have' from a 'have-not'"

At The Hive: What We Learned from Chris Paul's Absence
"There is reason to believe that not only has the nadir passed, but also that the team is better off for having lost Chris Paul to injury."

Posting and Toasting: On the Outside, Looking In
Memo to D'Antoni: Free Krypto-Nate!

Welcome to Loud City: Harden Making Things Hard On Opposing Defenses
"Many people disparaged Sam Presti for taking James Harden (the "safe" pick) over high potential guys like Stephen Curry and Ricky Rubio. So far, Harden is proving all of his doubters wrong."

Bright Side Of The Sun: What (if anything) is Wrong with the Phoenix Suns?
Hey guys, welcome back to Earth.

Sactown Royalty: A Formal Apology to Kenny Thomas - An Open Letter on behalf of many King's fans.
Maybe we'll need something like this when FinDog hits a game winner for us again. We miss you, FinPerro. Heal fast.

SLC Dunk: The Miller Family Christmas Carol Sing-A-Long
"...on Monday, December 21st, the Miller family will host the annual Christmas Sing-a-long at the Energy Solutions Arena...I'm sure it will be a very emotional night as it will be the first Christmas without Larry Miller there."

Ridiculous Upside: Last Night in the D-League; Oh boy, we get to talk about the refs.
"Recaps of last night's D-League games."-- Toros win, beaches.

Ball Don't Lie: Stan Van Gundy to get shot at 3-point contest trophy
Whould be more fun than usual with SVG around. Oh, if only it were true!

Ball Don't Lie: 'Jordan vs. Russell charity game' hoax angers fans
Um, well... it might be for the betterment of everyone if this didn't push through.

CBS News: Ex-NBA Ref Tim Donaghy's Personal Foul - 60 Minutes
"Now Donaghy speaks out publicly for the first time, telling 60 Minutes correspondent Bob Simon why he bet on NBA games, how he won so often, and how his world collapsed. And what a world it was."

Yahoo! Sports: D-League offers option for prep-to-pro players
"Latavious Williams hopes his decision to go to the D-League out of high school eventually leads to the NBA."

SI.com: Blazers' Oden expected to miss rest of season
That was a sad day for basketball. Get well soon, Grampa Greg.

Rick Reilly - Go Fish: New Jersey Nets' "Your Ticket To a Player"
"For $25,000, you get four courtside tickets for 10 games, parking, access to a private lounge, free food and drinks, and a one-hour appearance by a Nets player of your choice at your home, office, school or party."

SI.com: Stephen Jackson fits in with Bobcats, Larry Brown
"Though initially cool on the idea of playing for a non-contender, Jackson quickly warmed to the idea of going to Charlotte."

FOX Sports: Looking at whom Knicks should keep — or lose
Charley Rosen puts on his GM hat and proposes how to clean up the Knickerbockers.

Lots of awesome contributions from LatinD and Lauri for this edition. Enjoy them all.

Here's something from Lauri. Interesting, and definitely not for the weak of eardrums. But first, here's a short background:

A little background is in order for this one. Florence Foster Jenkins (1868--November 26, 1944) was an American soprano who became famous for her complete lack of rhythm, pitch, tone, and overall singing ability. In this video, the world's most inept opera singer frightens felines with her rendition of Mozart's aria Queen of Night:

You know what? Santa is a good sport.
Maaaaybe NSFW.

Lauri: This may be too disturbing. I know I'm disturbed. Just . . . wow.
Obesity kills. For realz.

House explained
Now you don't need to watch all those seasons.

E-Mails From an A-Hole
Still doing his thing.

FaceSpace
It could happen.

The Butterfly Circus
People kept recommending this to LD. Maybe you'll love it, so here's part 2. (Subbed in Spanish.)

Mad Hatter, by Nico Di Mattia
Another speed painting by one of LatinD's favorite YouTube artists.

Kitty MacGyver
Because Lauri will love this one.

Lego Matrix is even better when put side-by-side the actual scene.

Your Cat is Average
More linkage for Lauri.

Black People Love Us!
The least racist couple in the US.

RayGuns!
I totally got you covered for this season and the next few years, CapHill.

Dunk-Off: Richard Jefferson vs. Vince Carter
From an old Nike commercial. RJ obviously lost this one, but just a reminder: the dude can really throw it down.

Steve Nash is a true comedian.

In case you missed it in the SBNation links above, heeeerrreeee's Cuban!

A statue of a man ashamed because of the size of the crap that he is taking
Can't copy the photo directly, so you'll just have to click. 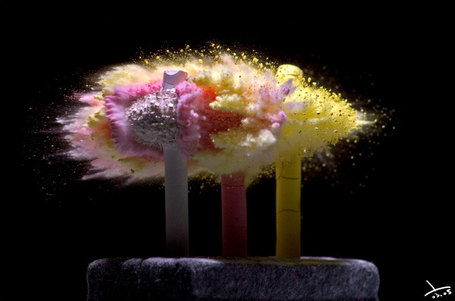 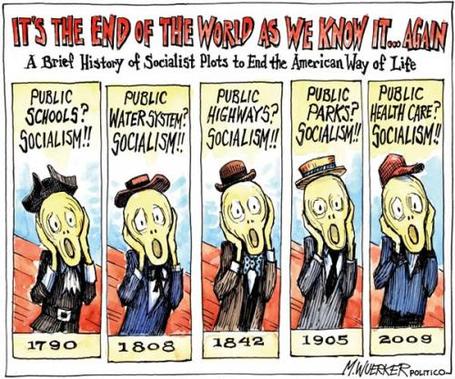 Characters for an Epic Tale
Should be awesome. 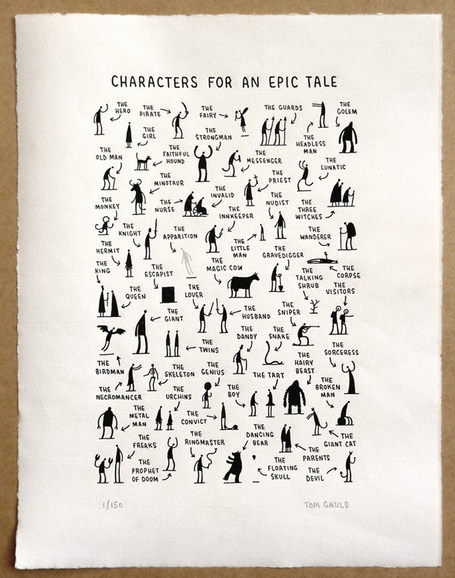 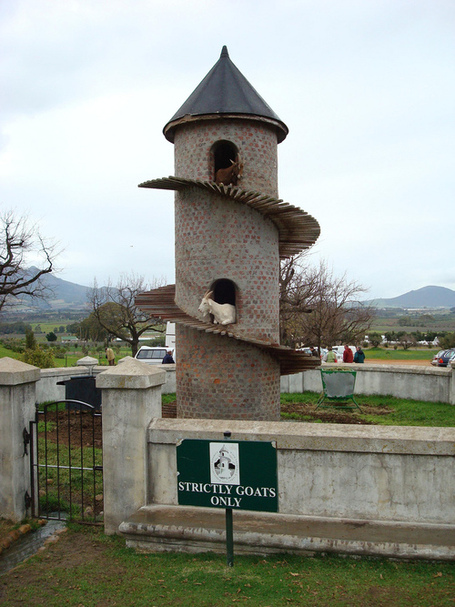 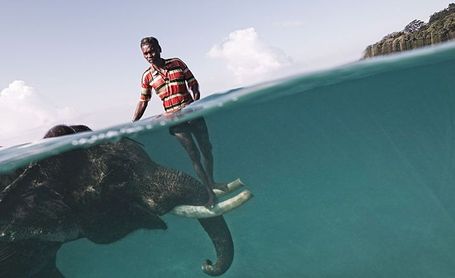 Antonio McDyess on turning up the intensity after a horrendous third quarter by the Spurs against Charlotte:

I was just trying to put my will on the game and do what I could to get another possession. We were so out of rhythm at that point.

Tony Parker on getting Richard Jefferson more involved on offense:

I said, ‘We have to do something." We had to get Richard one alley-oop.

RJ on not having the usual numbers he puts up:

It's not about what my numbers should be. For me to take a step back and find my groove on a team that's getting wins, I'd much rather have that.

Hope you had a blast. See you for the Monday edish, then.