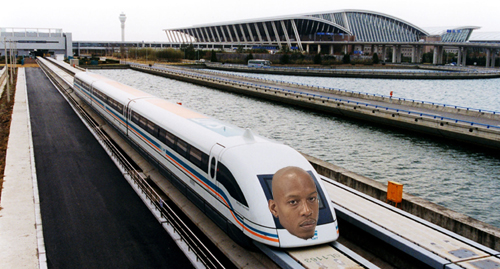 The Maglev has left the station. You'd better get used to it, Findog.

After the last 2 games went horribly awry, the Spurs need a win to tread water. Let me just say it up front: I think they'll get that win tonight. But how will it go down? That's why we watch.

Join us after the jump for your preview.

In the last game, we learned that the new-look Spurs are capable of playing defense, thanks in large part to the efforts of Keith Bogans. Pop started the Bogeyman, who hounded Brandon Roy defensively early in the game, and even managed to hit half his shots on the offensive end. With that in mind, I think he'll get the start again, and be assigned to pester rookie DeMar DeRozan. Pop might also start Manu if he's concerned about our starting unit's offensive production. Another new starter is George Hill, but that is definitely not the result of Pop's experimentation. Tony Parker is out, and while we all hope his ankle heals soon, the Spurs are going to have to compete without him for a few games. George's defense should help to make up for his relative lack of offensive prowess.