State of the Silver Stars Nation

Share All sharing options for: State of the Silver Stars Nation 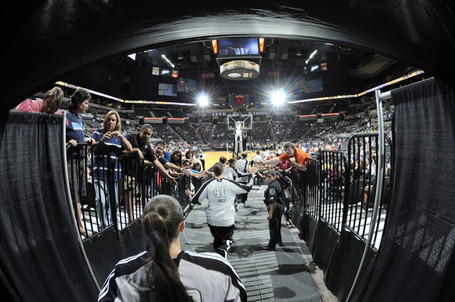 Becky would've caught that bat, too
(via silverstarsnation.com)

A Silver Stars post? At this time of the year? I'm afraid that's what you're seeing, guys.

We'll get back to our scheduled Spurs obsession soon, but I thought it would be interesting to know what our gals are up to during the offseason. For those of you who don't know, in women's basketball European leagues (in particular the Russian league) actually pay much higher salaries than the WNBA, so just about every qualified WNBA player makes the trip to the Old Continent once they're sent fishing here. It's an interesting reversal of the NBA situation, isn't it?

The alchemical secret to turn the WNBA into a goldmine, after the jump:

Most of this information (and the photos) comes from Silver Stars Nation. It's the best Silver Stars blog out there, and I wholeheartedly recommend it.

As I said, the European basketball season has begun, and our gals are working their craft overseas. I'm going to simply do a player-by-player breakdown of them, and tell you what they are up to these days. You can follow the links to Silver Stars Nation's pages for more information and some chatting.

Ruth Riley and Helen Darling are enigmas I can't crack. (Not true, I'm just a bum.)

That's it for the moment. We'll check back in a couple of months to see how the gals did in their respective tournaments.