Not Quite A Wallpaper: BatMANU Begins

Share All sharing options for: Not Quite A Wallpaper: BatMANU Begins

In the first game of the young season that I missed watching or "monitoring from a boxscore", Manu becomes one of my favorite comic book characters of all-time. The FSM must hate me. To compensate for that missed ethereal experience, I thought of just hack 'chopping Manu's head in a decent Batman image. Two images, actually. Here is the first: 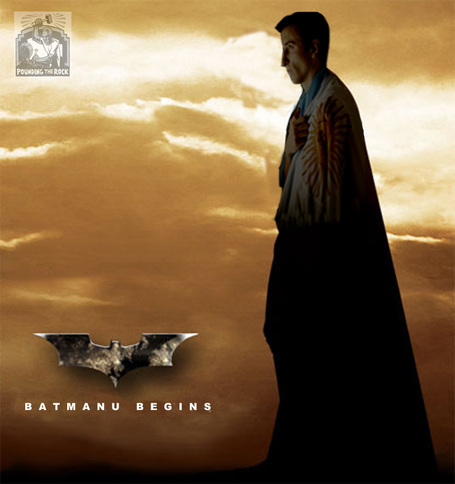 It's cold and lonely at the top.

Wow, I don't know if it's me or my browser or what but SBNation blogs look different all of a sudden. I think I'm high from all this cut and pasting. Whatever. Jump in to see the lamer second one.

Just a short background on the first. I was googling through some photos of The Sickness and I stumbled upon an awesome photo of him with that Argentine flag draped on his shoulders, which of course, I used. Unfortunately, it's only a half body image so I had to fade the bottom to black, and with that I think I failed pretty miserably.

One of my favorite movies, by the way, is the two Batman movies that Christopher Nolan made, so you can just imagine my childish excitement over having a legitimate reason to put one of my favorite Spurs in a Batman poster.

The second photo is the more traditional comic book Batman, drawn by Marc Silvestri (looks like it, and from the sig, too, with some other artist I don't know), also the creator of comic books I've collected such as X-Men and Cyberforce. I stopped collecting when I got to high school because I discovered that I should live life more vicariously by meeting girls through the internet, instead of sitting around flipping through pages of absurd drawings. 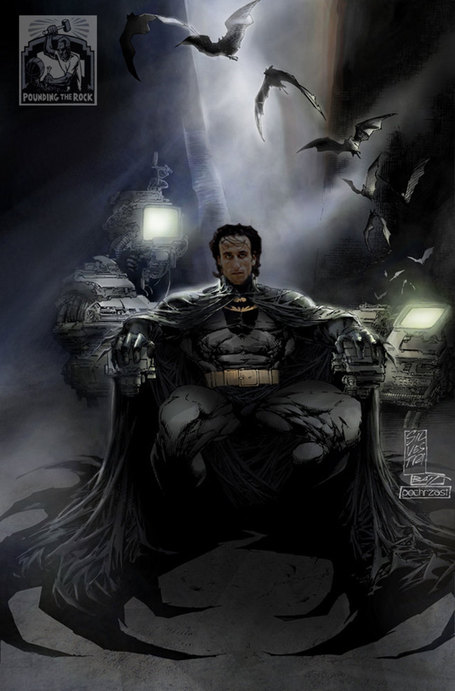 I don't know shit about wallpaper sizes, so maybe someone can tell me how to do them properly, that is, if someone actually wants to put these up as their wallpaper. Please do not kill me if I murdered everyone's favorite Spur. And don't tell Manu where I live, lest I be swatted like a stray bat.