Share All sharing options for: Dante Critiques: The Stern Goes to Hell Edition

Welcome to the second installment in the Dead Authors Series. If you missed the first one, you can find it here.

As the world bids adieu to another All Hallow's Eve, it's time to take a journey through the very place that inspires an entire genre of terror: Hell. Forget the modern portrayals by Western culture - we are stepping back in time to vicariously experience Purgatory through the eyes of a poet. In the portion of his Divine Comedy known as The Inferno, Dante details his arduous passage through the Underworld, traversing the interminable descent replete with monsters-human and otherwise.

As inscribed on the Gates of Hell: 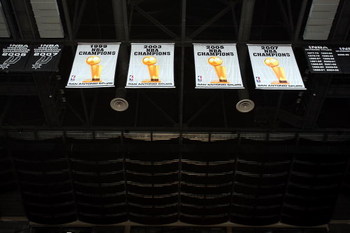 Hell, at least in medieval terms, is not a dark hole or a fiery pit, but nine downward circles, each increasing in the wickedness of its sinners, terminating at the center of the Earth. The first of these circles of Hell is Limbo. But first, some musical selections:

Limbo, the place where the uncommitted reside. Although not punished, those who dwell in Limbo live in a pale representation of Heaven and will never be allowed to enter the real Paradise. The NBA equivalent of Heaven is the presentation of the O'Brien trophy and the unfurling of a Championship banner. Much like the poor souls in Limbo, the Cavaliers will never be allowed to experience Paradise. Is it too late to declare the Shaquille O'Neal acquisition a failed experiment?

The second circle of Hell is where the true punishments start. Here Minos, previously the King of Crete, sits as judge over the damned, sentencing each person to a circle by wrapping his tail around his body an equivalent number of times. (And this is where I imagine a really big ring-tailed lemur.) 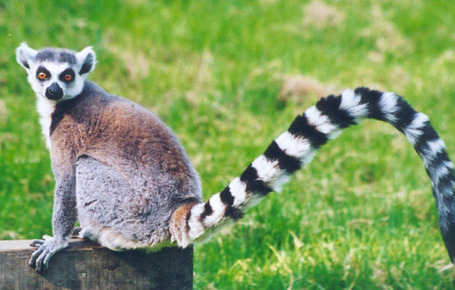 In the second circle, the lustful are constantly buffeted by tempestuous winds, much as they were controlled by their passionate whims during life. Mark Cuban has given his emotions free reign during his ownership of the Mavericks, constantly lusting after his ultimate goal, an NBA Championship. However, his restless ardor has often caused him to forgo the future for the now, possibly to the detriment of his dream (see Harris, Devin trade).

Guarded by Cerberus, the three-headed dog, the gluttons are forced to lie in swampy mire, while being pelted by rain and hail. Instead of enjoying the fine food and drink of their life, these shades now must wallow in filth for eternity. Now this brings us to Eddy Curry. Here is a man paid to be in shape, yet he has let his body mimic his bloated contract. He lost all of last year due to injuries, and has yet to see the court this season due to conditioning. (And y'all thought I was going to talk about Shaq.)

Squaring off in the fourth circle are the Misers and the Spendthrifts. They constantly antagonize each other, in a demented game of Red Rover, shoving weighted burdens that crash together, with neither side winning. In this corner, you have the Grizzlies, hoarders of cap space to use only for the betterment of other teams. In the other corner, you have the Knicks, wasters of prolific resources who insist on acquiring every bad contract ever inked. The proper punishment for these two organizations would be to allow them to only trade with each other, in perpetuity. 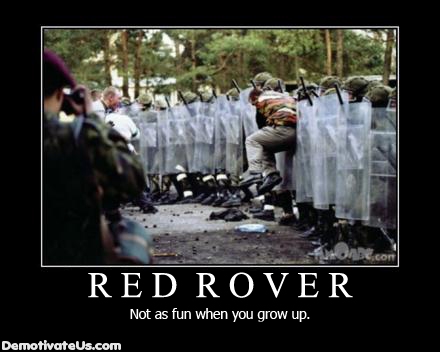 Trapped by the swampy waters of the Styx are the angry and the sullen. The angry souls are vindictive even in death, tearing into one another. The sullen sink into the murky depths, choking on the slime as they choked on their resentment while alive. Joey Crawford is one angry man, feeling the need to constantly T-up players who might disagree with his calls. Heck, he even once ejected a player for laughing on the bench. NBA fans can verbally tear into him, but I'd be content with Joey C. never reffing a Spurs game again.

Unfortunately, sullenness brings one NBA player to mind - Stephen Jackson. Here's hoping Captain Jack can snap out of his "poor me" state. The privilege of playing in the NBA should outweigh the troubles of having to play for Don Nelson.

The Styx serves not only as the source of punishment in the fifth circle, but as a demarcation between Upper Hell (passive sins) and Lower Hell (active sins). We now enter the City of Dis, capital of the nether regions of the underworld.

Here Dante encounters fallen angels who try to bar entry to the lower levels. While waiting for an angel from above to open the gate, the Furies and Medusa use the time to talk smack to the quaking poet. Upon entering the sixth circle, the poet sees a vast cemetery with numerous sepulchers, all engulfed in flames. Here lie the heretics. Despite what the casual fan might think, defense does win NBA championships. Those teams that eschew this half of the basketball equation are doomed to go down in flames (i.e., the Seven-Seconds-or-Less Suns and the post-2007 Warriors).

Entry to the seventh circle is guarded by the Minotaur, mythological beast of the Labyrinth. Those guilty of violence toward others are doomed to immersion in a river of boiling blood, getting shot by the arrows of Centaurs. Those who hurt themselves are either torn at by Harpies or chased through the underbrush by vicious dogs. Those violent against God and nature must dwell on a plain of flaming sand, with fire raining down like snow. Author note: In this last group, Dante includes usury, which just confirms that credit card companies and uber-banks are evil. Violence in the NBA? Hmm, never happens. Except, of course, for that minor scuffle in Detroit. Despite his good behavior with Lakers this season, Ron Artest will be forever linked with The Malice at The Palace. Crazy Pills is his own worst enemy, raining down punishment upon himself.

"There is a place in Hell called Malebolge" for the fraudulent. The Eight Circle is divided into ten separate evil pockets. Since Dante spends over ten cantos (chapters) describing the various Bolgias, let's simplify it and look at the Grafters. These sticky fingered souls must spend eternity beneath thick, boiling pitch. Scary demons with hooks grab those who rise out of the pitch. Now who in the NBA has notably been on the graft? Tim Donaghy. Using his position to make money and influence the outcome of games. This is one guy I wouldn't mind Ron-Ron taking a swing at (hypothetically, of course). Although if any of Donaghy's allegations are true, the NBA is in deep poo, the poetically symbolic retribution for flatterers.

Cocytus, the frozen lake at the bottom of Hell. Here, the traitors are imprisoned, ranging from neck deep to total immersion. Some acts of treachery are so appalling that the perpetrator is immediately ripped from the body and falls into Hell, with a demon taking the place of the soul in the body above. (This explains my junior high algebra teacher.) Welcome, Clay Bennett and cronies. 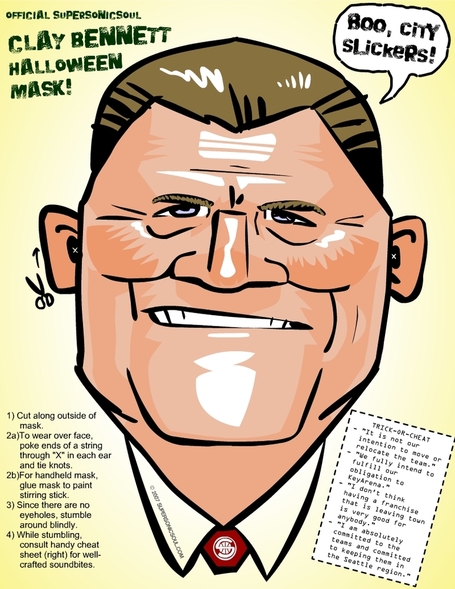 Yes, technically you had to right to move the team. However, do it in an honorable way. You can't state you want to keep the team in Seattle, hold the city hostage, and then move the team anyway - the only team in the city to EVER win a chip. (Stern deserves a good portion of the blame, but we'll get to him.) Author note: The ninth circle is where I would place Comcast, if I could.

While traversing across Cocytus, Dante wonders aloud about the source of the ever-present wind. He soon finds it, as in the center of the ice, in the very depths of Hell, is Satan. The ultimate betrayer is encased in ice up to his chest, a hideous creature with three faces and flapping bat-like wings that create a freezing wind. Each mouth is busy chomping down on a sinner, with the greatest pain reserved for Judas. Now who in the realm of the NBA could possibly be viewed as Satan? Yes, that's right, the commish - David Stern. 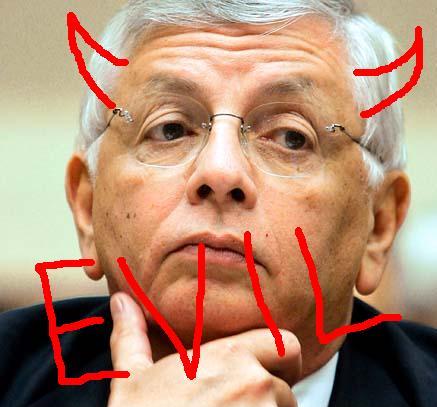 The Judas in Stern's mouth isn't a sinner, but the fan getting eaten by the NBA's corporate mentality and inability to address the common man.

To leave Hell, Dante is forced to climb down Satan's hairy backside to the other side of the world. And with that image now stuck in your head, I bid you farewell.