The Spurs organization double-dipped the Rockets organization yesterday when the Toros wrapped up their 93-82 victory against the Vipers.  The similarities of the scores, the Spurs beat the Rockets 92-84, have me convinced that our system is just that much better than theirs.

Yeah, I know that is hooey.  Follow me after the break as I weave JanieAnnie's Spurs-Rockets photos into my recap of the Toros-Vipers game. 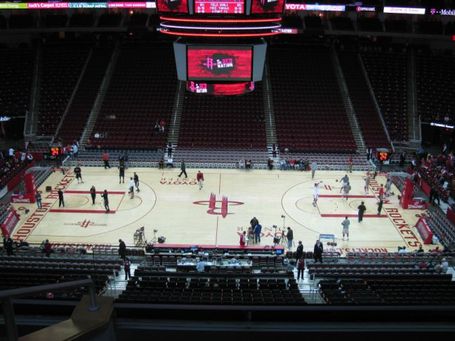 These seats don't exist at the Toros games.  Everybody is much closer.

First off, this will be a fun Toros team to follow this year.  They play really hard and play a lot of very good team ball.  Very impressive for a team that has only been practicing together for a couple of weeks.  Very little of the Toros offense was straight up isolation.  Most of it was pick and roll with cutting, or running men off weak side screens to give them space to drive.  I'm not sure how they only managed 7 assists on their 32 buckets.  Probably because they don't shoot jumpers.  These guys attacked the basket. 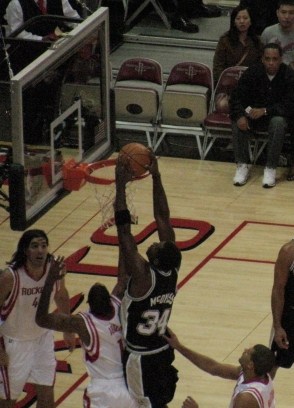 "Man, playing against short guys makes this a lot more fun.  Is that Sasquatch over there?"

Free Throws Can Keep You In It

The first quarter was U-G-L-Y you ugly for the Toros.  They shot 37% (7-19, I'm not counting the longer than half court shot at the buzzer).  What kept them in the game was the free throw line.  They were 10-10 in the quarter.  What kept them from really dominating, since the Vipers also looked terrible offensively, was their transition defense.  They gave up 4 or 5 layup/dunks on the fast break because they didn't get back when shots went up.  Instead, they had 3 guys trying to get the rebound.  Even if the rebound was to the other side of the court, the players were standing and waiting hoping that their teammate would get the board.  When they didn't, their man was 15 feet further up court than they were.  Without the easy buckets, the Vipers would have had 10-12 points instead. 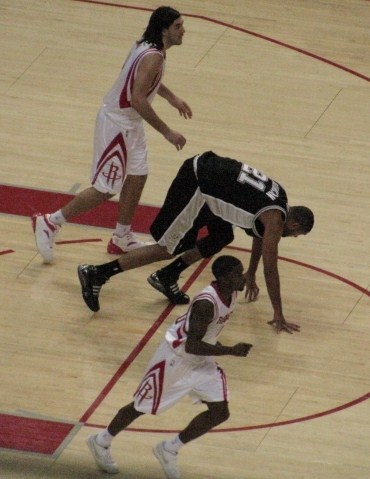 "Luis, check it out.  This is my crab-walk.  Do you think this will get me on Sportscenter finally?"

The Second Quarter Was More Ugly

The Toros only made 6 shots in the second quarter (dropping the team shooting % to 32.5) and had 7 points from the line ending the first half 17-18 from the line.  The Vipers, on the other hand, were 6-12 as the second quarter ended with the Toros up 43-42 (again, very similar to the Spurs-Rockets 46-44 score).  For those at home who are fast with the sliderule, you'll notice that the Toros ended the first half without a 3-point basket.  This team doesn't have any chuckers from distance.  They only attempted 3 in the half and one of those was Alonzo Gee's chuck at the end of the first quarter that I refused to count. 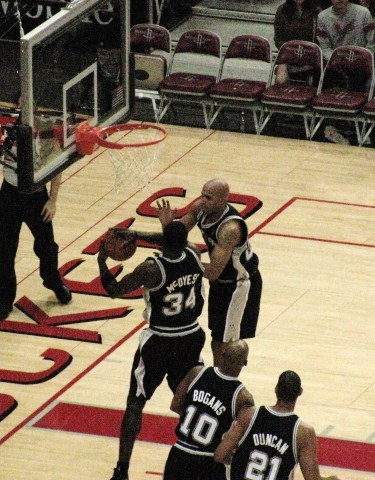 The rebounding numbers at the half were ugly and they are something to keep an eye on as the season goes along.  The Vipers had a 31-19 edge at the break with 11 offensive boards.  Joey Dorsey had 8 total and 4 offensive for the Vipers -- he's down on assignment from the Toros.  But, I really expect this to be a constant problem as the Toros are very short.  They only have two players over 6' 6" and they never saw the court at the same time. 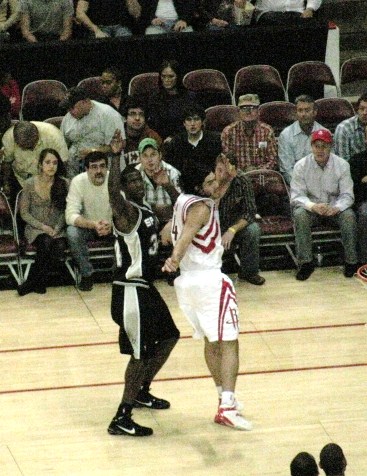 "Luis, you freak, I WILL NOT tango nor salsa with you.  I've told you, ask Rage."

The Third Quarter Was Moving Time

The Toros extended the lead to 9 in the third quarter with good team play.  They started hitting some shots -- 9-20 -- and forced 6 vipers turnovers.  They also picked up 6 offensive rebounds in the quarter.  This time it was the Toros who had some free throw shooting issues.  Russell Carter, the team's starting shooting guard, went 3-7 from the line and seemed completely disgusted with his misses.  He said, "that he had read Shaq on Twitter and it jinxed him."  Russell did have all 7 of his points for the game in the quarter. 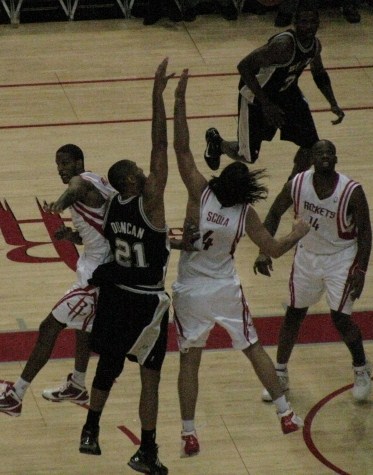 "Tim, can I practice with you?  I need somebody to dance with.  And get your hands off me you freak."

Gee and Anderson, It's the NBA D-League

Alonzo Gee and Antonio Anderson dominated the fourth quarter for their teams.  Anderson had 14 in the quarter on 6 of 8 shooting.  The Toros couldn't keep him out of the paint.  He just blew by his man and caused trouble the whole quarter. 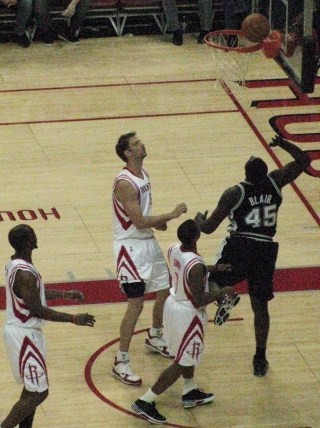 For the Toros, Alonzo Gee was doing his Adrian Dantley impression.  The team would give him the ball in the left block/wing -- think Tim Duncan's position about 12-15 feet from the basket and cleared out the side for him.  They started the fourth going to him and just kept going.  He was 4 of 5 for the quarter.  He hit a fadeaway, he powered into the paint for a pull-up, and lastly hit a step back from about 18 feet.  Those weren't his only touches though.  The Toros were basically running their offense through Gee in the post like the Spurs 4 Down.  The Vipers had no choice but double team him and he did a great job passing out of the block.  "I'm very comfortable passing from the post", Gee said, "I played the post in the SEC."  It's why I'm surprised that the Toros only had 7 assists and Alonzo had none.  The guys he hit ended up driving to the rim or passing to another guy.  The Toros shot a nice 10 of 18 in the quarter.  All of this from the left block where Gee says he less comfortable.  "I'm better from the right side, but coach kept telling me to go to the other side.  I don't know why."  Alonzo ended with 24 points and 8 rebounds.  He shot 9-15 from the field and 6-6 from the line. 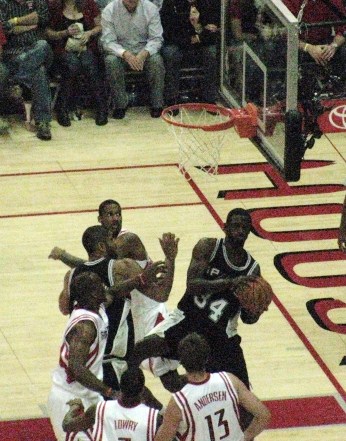 Up 7 with the ball with just under 6:00 to go, Lewis Clinch came down on the delayed break and launched a 3.  The Toros had not made a 3-ball to that point.  Of course, nothing but net.  When asked, Gee said, "That's a good shot.  He's a good shooter.  Really good."  I'm thinking Coach Snyder may have been thinking something else.  The shot extended the lead to 10 and the Vipers never got it closer than 6 the rest of the way. 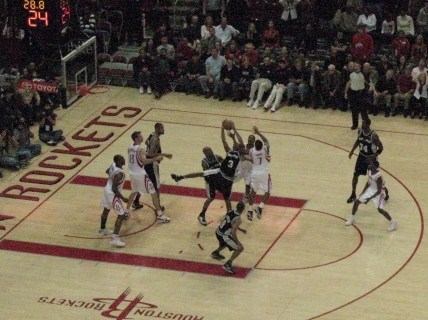 "Luis, we've got a new one for you.  They probably don't have it in Argentina.  We call it moshing." 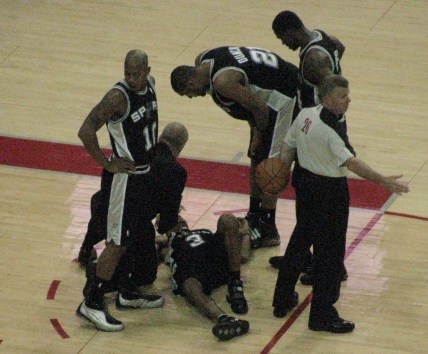 "George, I keep telling you.  Leave the moshing to the Beast.  He's got body for it."

Dwayne Jones and Joey Dorsey really went at each other last night.  Joey finished with 15 rebounds.  8 on the offensive end.  He also sent a half dozen guys flying.  Dwayne Jones had his own 12 boards, 9 on the offensive end, and did his fair share of body work.  I asked him if playing Dorsey was hard and he said, "No, you know, that's how I play too."  Personally, I think Dwayne enjoyed it.  He also chipped in 11 points.

Dorsey had a tough night shooting the rock.  He took 9 field goal attempts and 9 free throw attempts to get his 7 points.  I don't know the shooting % on that, but it isn't good.  The 1-9 from the line was abysmal.  He did compete out there.

In fact, his play pretty much killed the Vipers late chance of getting back into the game.  But, it wasn't his shooting this time.  Clinging to a 6 point lead with 1:40 to go, the Toros were inbounding the ball with 3 on the shot clock.  Dorsey got called for an away from the ball foul (before the ball was inbounded) for holding a jersey.  Jerrells made the free throw and Clinch hit a runner -- thanks to the shot clock being set to 14 -- and the game was over. 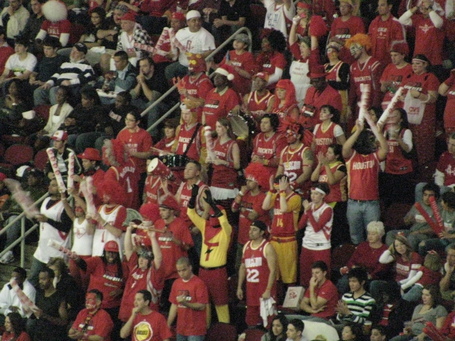 A bunch of people about to be banned from PtR.