As  you hopefully know, we are having a PtR Toros night this Saturday on "Spurs Affiliation Night".  However, the Toros season starts on Friday and you deserve a season preview.  Austin Toros Media Day was Tuesday and I got a chance to talk to a couple of the players and see the new court.

Ladies and Gentlemen, Your 2010 Austin Toros 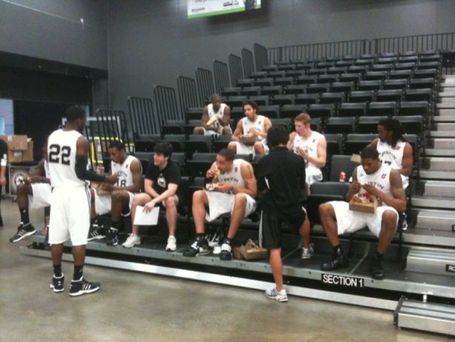 The Toros finalized their roster Wednesday by cutting a couple guys.  The roster now stands at 10.  Here it is in alphabetical order:

Who Are These Guys and Where Did They Come From?

Justin Bowen -- Illinois-Chicago(UIC):  He's a returning player from last year and has been with the Toros off and on for the last 3 years.  Lauri was at a meet the players event and said the 26 year old is a cut up.

Ryan Bright -- Sam Houston State:  Another returning player from last year.  He played in 20 games last year and scored 4.8 points per game.  He's a youngster at only 23.

Russell Carter -- Notre Dame:  Russell, 24, graduated from Notre Dame in '07 and played last year for Gravelines-Dunkerque in the LNB (French Domestic League).  The Toros picked him in the second round of the draft.  I had to seek him out and ask him some questions (more on that later).  He was pretty easy to find.  He was listed on my sheet at 6' 2" 220 pounds.  He's built like a truck.  For comparison, George Hill is listed at 6' 2" 180.  Richard Jefferson is 6' 7" 225 and I have talked about how big I think he is.

Lewis Clinch -- Georgia Tech:  The youngest Toro, at 22, Lewis was taken in the 3rd round of the draft after finishing his career at G-Tech.  Lewis average 15.5 ppg for the Yellow Jackets last year while playing in 35 minutes per game.

Alonzo Gee -- Alabama:  Also 22, just finished his career at Alabama where he is 11th all-time in scoring.  He played on the Spurs Summer League team this summer which may have had something to do with him being the Toros first round pick in the draft.  He said he learned a lot from playing with Malik Hairston this summer.

Curtis Jerrells -- Baylor:  Curtis is an Austin guy, Round Rock actually, and was assigned to the Toros as an allocated player (which means they got him because he is a local guy).  As you know, he was with the Spurs for the preseason.

Squeaky Johnson -- UAB:  This is Squeaky's third year with the Toros and he was on the Spurs Summer League team.

Dwayne Jones -- St Josephs:  Another returning player and another guy who was on the Spurs preseason roster.  He's had some interesting travels.  He started last year with the Bobcats (which when he told me confused me because I forgot they were an NBA team).  He then signed with the D-League and was traded to the Toros.  He signed a contract in October with a Serbian team, but then was release 2 days later.  He said it was a strange experience.  The GM signed him but the coach wanted another player.  He said he'd been cut before he even got over the jet lag.  He'll be a beast in the paint for the Toros.

David McClure -- Duke:  5th round pick in the draft.  Another ACC guy.  Started a few games and averaged 16 minutes per game.  Didn't score much though with a 1.9 average.  He shoots free throws like a Spur though, 45.5%. 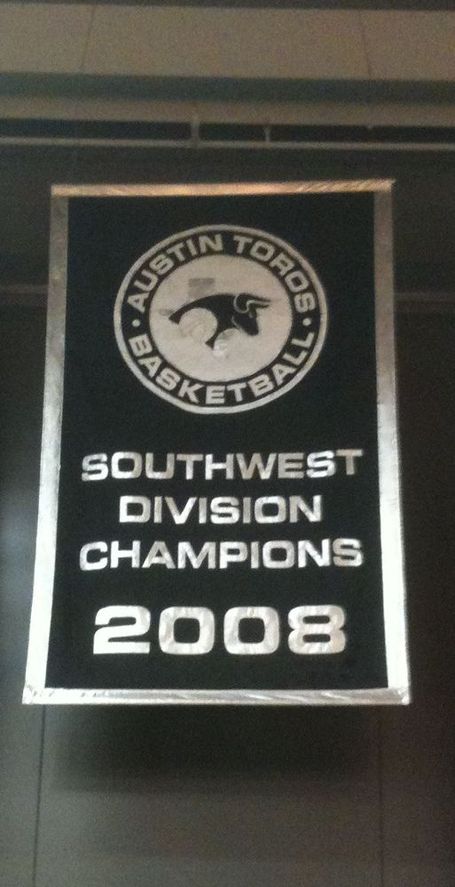 When I first saw the only banner, I thought I was in Dallas.

The Toros play in the Austin Convention Center and it holds about 2100 people.  Since it is so small, there really isn't a bad seat.  I mean, this is your view from the last row. 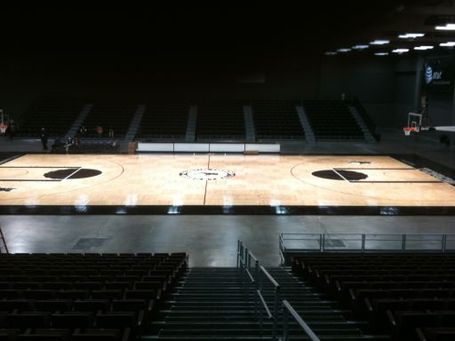 That's a crappy picture.  You really aren't far from the court and you certainly aren't high up.

Russell Carter got a huge running start as my favorite Toro.  Since he had played in Europe, I wanted to ask him questions about what it is like.  What a great guy to talk to.  I hope he plays a lot of basketball because he'll be great to interview.  He played in Gravelines in the French domestic league for part of last year.  He said it is about 2 hours south of Paris.

I wanted to know what it was like playing in Europe.  What are the crowds like?  What are the arenas like?  How often do you play?  How much do you practice?

Russell said the crowds are small, but intense.  He said Gravelines held 3-4000 people and that they were piled right on top of the court.  He said it was like playing in a small Cameron.  He also said the crowd was a bit crazy and they used it as some sort of counter culture event.  Men would come to the game dressed as women.  I'm thinking Austin is the right town for Russell then.  It will make him feel like he's still in France.

I said, "this sounds like you practiced all the time."  He said, "yeah".  I asked him, if with only one game per week and practicing all the time, if you started to hate the guys on your team.  He said that you couldn't.  You spent all day of every day together.  You were really tight.  He said that their morning practices started at 10:00.  He lived across the street from the facility and by the time he had showered and dressed and got home it was 1:45.  Then they were back at 5:00 for their evening practice.  That's a lot of practice.

I really appreciated the insight I got into how Euro teams run things.  Hat tip to Russell for being so forthcoming.